Kansas guard Naadir Tharpe defends against a drive by Texas guard Isaiah Taylor during the second half on Saturday, Feb. 22, 2014 at Allen Fieldhouse. 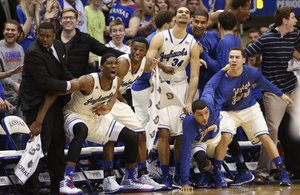 In the first meeting between Kansas and Texas this season, Longhorns guard Isaiah Taylor looked virtually unstoppable and scored 23 points in pretty much any manner he wanted during a 12-point UT victory in Austin, Texas.

In the rematch, Saturday night at Allen Fieldhouse, the 6-foot-1 freshman from Hayward, Calif., was not as fortunate and finished with just five points on 1-of-14 shooting in 31 frustrating minutes.

Although the point differential between Taylor the terrific and Taylor the terrible was just 18 points, it impacted Saturday's game in a much bigger way and the Jayhawks steamrolled the Longhorns, 85-54.

“He missed some shots early,” said Texas coach Rick Barnes of his young guard, whose first point did not come until 2:47 remained in the first half. “But what surprised me about him was he was one guy that didn't do what we needed done offensively. The way they were playing him, what they were doing and the counters that we had, we weren't getting it done.”

Barnes later explained exactly what he meant and chalked up Taylor's inability to execute to his limited experience at the college level.

“His biggest thing that he's still continuing to learn is how to play against adjustments,” Barnes said of Taylor, who also had five assists and two turnovers. “(He'd) give the ball up, they would deny him and he just stands. He's gotta learn to play without the ball. Actually, the last game, he did that a couple times. Why he didn't do it tonight, I can't tell you. But they did a good job with what they wanted to get done.”

Eliminating Taylor as a scoring threat was a major focus for the eighth-ranked Jayhawks (21-6 overall, 12-2 Big 12), who used multiple defenders on the slithery guard and saw their efforts pay off. Of course, given that Saturday's meeting was the 21st all-time between Barnes and KU coach Bill Self — Self now leads 13-8 — none of that surprised the 16-year UT head coach.

“They didn't really do anything different than we expected them to do,” said Barnes, whose team missed a golden opportunity to pull within a game of KU in the conference race and fell to 20-7 overall and 9-5 in Big 12 play. “We just lost confidence because of the way we were playing and it snow-balled.”

The early meltdown, which turned an 8-3 lead for No. 19 Texas lead into a 28-10 deficit in just over 10 minutes, rendered worthless the rest of Taylor's night and turned what began as a showdown between top two teams in the Big 12 standings into a highlight clinic for Kansas.

Because of that, along with a general lack of execution, 34 percent shooting, 11 missed free throws and an offensive output 23 points lower than average, Barnes left Lawrence compelled to borrow a line from Self.

“I think we should probably refund the fans,” Barnes began. “What was the team that Bill talked about? Topeka YMCA? They probably would've given 'em a little bit better game because we sure didn't give 'em a game.... They beat us and they beat us good.”

Was hoping to hear an "underrated" chant after hearing and agreeing with Barnes' comments after our loss in Austin!

One of the most enjoyable revenge games ever! Watching the guys on the bench so happy for each other was very, very special!! RCJH!!

And no, Rick, the fans don't need a refund. They got their money's worth. :)

I think we were sullen after the Austin defeat. Texas looked beat down and maybe we got in their heads a little with this win.

The OU game shapes up like a track meet. We both score in transition and the difference should be inside. Perry may have a nice scoring game.

Not sure what is really hampering Perry, but I finally noticed something different in his play. He is not jumping as high as he use too. Both this game and the last he barely managed to hop 4 to 5 inched off the floor when he shoots. Two weeks ago for his big game, he was getting a lot higher in his jumps and shooting over his defender.

That kid is great and will improve. I suspect the 6th man got to him some also...but our guys did a great job on him. I hope that version of the Jayhawks is the one we see every night in March!

I think Taylor will be a good guard for Texas, I also think the first time we played them we just stunk it up defensively and that is our biggest concern, if we start shooting cold in the tourney(which happens to just about every team at some point or another) we need to be able to match stops for stops. I think our scoring capability is off the charts, lots of people can put the ball in the basket, and depth-wise we're also secure. But we need to get that patented Bill Self slight sag off the ball, lockdown man defense, guards cannot just slice through the lane like they have been on a consistent basis. We can't rely on JoJo as a crutch to help us every time we break down and have him have to block 20 shots. tharpe,mason, selden, and wiggins need to lockdown on the perimeter and keep things tight. that all being said, we're on the verge of 10 straight! very proud of this team!