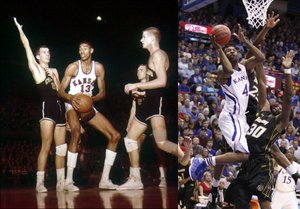 Kansas University senior basketball forward Justin Wesley will not be scouring any of the trade magazines for possible reviews of his portrayal of legend Wilt Chamberlain in the movie “Jayhawkers.”

“I did it for fun without any prior acting experience, no acting school or anything like that. Not too many people can go and do that,” said Wesley, who is looking forward to walking the red carpet before the film’s premiere at 7 p.m., a week from today at Lied Center.

“If I get negative reviews or whatever the case may be, hey, you show me you can do a better job,” Wesley added, smiling.

Wesley — “second lead” next to Kip Niven’s Phog Allen character — earned high marks from director Kevin Willmott in a film that depicts the “story of a group of unlikely allies who modernized college sports and changed a small Midwestern town, serving as a parallel to the Civil Rights movement that would transform the entire American society.”

“I don’t think there’s anyone in the country who would have been as good as Justin is in the film,” Willmott said in a story on the movie that will appear in Sunday’s Journal-World and ljworld.com.

Wesley, a 6-foot-9 forward from Fort Worth, Texas, was recommended for the part by KU coach Bill Self, who was asked by Willmott during the 2011-12 season if he knew of anybody who might be a slam-dunk hit as Chamberlain.

“When coach approached me, it was one of those things I didn’t really know what I was getting myself into. At the same time, I didn’t think I could say no,” Wesley said. “At that time, clearly I didn’t understand the magnitude of it or how big it was going to be. I’m glad about the decision I made.”

He didn’t read up much on Chamberlain for his scenes that were filmed in the summer and fall of 2012, merely watched a couple of Chamberlain’s interviews on youtube.com and closely followed the direction of Willmott.

“Only one day I had a really hard time memorizing the lines. I think I had 10 takes in a row,” Wesley said. “Other than that, it wasn’t too bad. I don’t want to toot my own horn or anything, (but) it didn’t take me many tries to get it right.”

Wesley sounds like a Hollywood actor on a late-night talk show when discussing his character, however.

“When Wilt came to KU, he was more than a player, he was more like a celebrity, like a movie star. You could compare him to that kind of figure at that time,” Wesley said. “People gravitated toward him. It was a big adjustment for him (after graduating high school in Philadelphia). He was seen as a celebrity but still had to abide by segregation rules.”

“I’m excited to see it,” Self said. “I’m excited to see Justin’s acting debut. I know he enjoyed it. He is a cool kid. He can go overseas and make some money (as pro player next year). He’s such a great athlete. He’s gotten better. He’s just caught in a numbers game (at his position at KU). He’ll be a success in whatever he chooses.”

Wesley, who has played sparingly this season, said he might go on to play pro ball. First up, however, will be his second movie role. Yes, he’s going to apply for his Screen Actors Guild card and act again.

“Kevin came to me about another film (that) he asked me to be leading role in after the season,” Wesley said, not revealing specifics. “I accepted that. I definitely was flattered when he asked me. I guess I did a good job in the first one. It is encouraging and makes me think maybe I can do this.”

For Wesley the actor ... it figures to be a long wait until next Friday.

“Anxious and nervous would be the right words,” he said. “I haven’t seen any of the movie yet, so I’m pretty excited.”

This, that: Former KU guard Ben McLemore of the Sacramento Kings will participate in the 2014 Sprite Slam Dunk contest, to be held Feb. 15 at the NBA All-Star Weekend in New Orleans, the NBA has announced. ... No. 8-ranked KU (17-5, 8-1) will meet unranked West Virginia (14-9, 6-4) at 3 p.m. Saturday in Allen. Saturday’s game will celebrate the 40th anniversary of KU’s 1974 Final Four team. Head coach Ted Owens and players will be on hand and recognized during the game.

Man, I wish I could be there. Sounds like it will be a very exciting event. I can't wait to see the film.

Thanks for a nice article, Gary. Any idea what the plan is as far as releasing the film to other places?

Gary, please let us know when this movie will be available for people outside the Lawrence area can purchase a copy and/or see it...

I am guessing the part regarding Wilt's 20,000 trysts was left on the cutting room floor. :)

All kidding aside, Wilt Chamberlain has to be considered one of the elite athletes of all time. [Muhammed Ali, Jim Thorpe, Gordie Howe, Pele, among a few others come to mind.]

Wilt proved his prowess in basketball and volleyball. Can you imagine what a tight end he would have made or pitching off the old high mounds!! Can you picture him in the ring if he had chosen boxing in lieu of bball?

I am so glad he came back to Kansas and was received with open arms and unconditional love by Jayhawk Nation and so sad he didn't live nearly long enouigh to enjoy it more.

I said this many times that if I was in a three on three tournament, I would pick Michael Jordan and Wilt Chamberlain as my teammates and confidently take on any other three basketball players who have ever lived, because no team of three could have stopped both of them!!

Wilt also proved his prowess in track and field, high jumping 6'9", throwing the shot 54 to 55' and running the 440 yard[not metric then] dash in 48 seconds. He is the most elite athlete of all time in my opinion.

Myself and a whole bunch of my Stephenson Hall buds were at that game in the Astrodome. Since it was a raised court, we had to stand on our folding chairs for almost three hours just to see the game.

The refs were atrocious, totally favoring UCLA.... like it was "pre-ordained" that "Saint John" would win another NC.

I was also there for that game and clearly recall the traveling called on Robisch that would have tied the game and killed our momentum. Kansas has recieved so many rotten game changing calls over the years in the NCAAs....it kills me.

Those days also recall the previous spring, 1970 when Abbie Hoffman spoke infront of AFH and two weeks later the Union was burned. Over the years I've done a ton of research into those days/events. How the work has changed to now see members of the SDS, Weathermen, Vietnam Vets Against the War and other communist inpired groups now controlling key elements of our upper education and politics.

Stick with basketball related comments Suzi. Your political opinions are of no interest to me or I would guess anyone else. Save your McCarthyism for another forum, please.

Those were heated days and KU basketball played a huge role uniting the school. That was the point of my comment.

Want to see it as I had a couple classes with Kip when we were both undergraduates, plus I knew Phog; he was, at one time, my doc.

I ran into Wesley in the Fall of 2012. Having met Chamberlain on a few occasions, I reminded Wesley Wilt was called "The Big Dipper." I suggested we call Wesley "The Little Dipper."

'74 Team: So sorry that Danny Knight will not be able to make it due to his passing several years ago. Danny was the only Kansas native on the team that played.

Ted used to love recruiting IL playes. The rest of the team was All Ilinoins....Tom Kivisto (Aurora, IL), Norm Cook (Normal, IL), Roger Monrningstar (Dundee, IL). Rick Suttle (East St. Louis, IL), Dale Greenlee (Rockford, IL), Tommie Smith (Kewanee, IL) and Dave Taynor (Bethalto, Illinois.). Norm's son Brian was a HS All-American who ended up go to IL to play for the then Head Coach...Bill Self!!!! I was in Chicago at the time and realllllllly PO'ed Brain passed on Kansas.

Tom Kivisto...praying you can get the SemGroup issues successfully resolved and get back on the tennis court. Jack Sharpe always lamented you went to basketball instead of tennis.

Sadly, Norm Cook lost a long-standing battle with personal demons and is resting in peace. I knew him through a friend. He was a sweet guy.

Was at the '74 regional in Tulsa over Spring Break. We just walked up and purchased tickets at face value. Still in my Top 5 road trips ever.

Norm had a tough lift. When he was a kid, his father was shot in the head right in front of him on the family front porch. JoJo White tried hard to take him under his wing and was behind the Celtics drafting him.

I'd like to see some of the money generated by the KU program to go toward outreach programs for players, especially those that played out their eligibility.

I hope it comes out on Netflix. I am sure it will be entertaining and hopefully be fairly accurate. For us younger generation it is hard to understand how great Wilt was and stories do not do him justice. I am sure Justin did a great job and don't forget Ray Allen played Jesus Shuttleworth in "He Got Game," so it doesn't always take a great actor to make a role great.

For anyone who wants to see how great of a player Wilt Chamberlain was take a look at this link. http://en.wikipedia.org/wiki/List_of_career_achievements_by_Wilt_Chamberlain