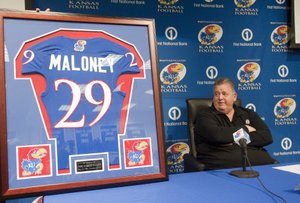 The piles of snow around Lawrence might have delayed Kansas University football coach Charlie Weis from discussing his latest recruiting class with the media, but they did nothing to cool off Weis’ excitement about the 25-member class that became official Wednesday, when the final 20 players in KU’s Class of 2014 faxed their letters to campus.

In bringing in a class that ranks between 47th and 55th nationally and features 15 high school athletes, eight junior-college transfers and two Division-I transfers, Weis on Thursday revealed a blueprint for building his program that is more traditional than what was seen during his first two classes at Kansas.

Last year, because the Jayhawks had so many “holes,” as Weis called them, the coaching staff attempted to fill the open spots with junior-college players ready to hit the field immediately. This year, the focus shifted from plugging holes to preparing for the future.

The KUsports.com crew's KU football signing day wrap-up, where we discuss the highlights, players that stood out, guys who might make a difference and the general direction of the program now that KU coach Charlie Weis' third class is complete.

“We have to set the program up for success,” Weis said. “And I think that’s what we did with this class. This class is the way we want to recruit: (Get) a handful of juco players that can play right away, bring in a bunch of high school kids, and whenever they are ready to play, play ’em.”

Weis did not divulge which players he thought had the most potential or the best chance to play immediately but hinted at answers to each and talked glowingly about the players he signed.

Weis said wide receiver and defensive line stood to get the biggest boosts from this class. Even though the two positions are distinctly different, the five wideouts and six defensive linemen who signed in this class have a few of the same strengths.

“I think size is important,” Weis said. “But speed and athleticism is more important, in this league especially. You can’t have enough athletic guys. Every coach in America is telling you how much they love their class, but we needed this class.”

Shawnee Mission West defensive back Andre Maloney, who died after collapsing on the field last October, had a presence at Weis’ signing-day news conference.

At the wake, Weis promised Maloney’s mother that he would introduce him and show his highlight film on signing day just like he did with all of the others. Sure enough, after going through all of the guys who signed Wednesday, Weis showed the film and turned his chair around to watch.

“Who knows what would’ve happened,” said Weis, who revealed a framed No. 29 jersey with Maloney’s name on it that would go to his family. “The sky would’ve been the limit for this kid. And I just want Andre’s family to know that everyone in the KU family has them and him in our thoughts and prayers.”

Athlete Corey Avery picked Kansas over Texas and Nebraska. Wide receiver Darious Crawley picked KU over Michigan State. And a half dozen others had similar schools sending them offers. But one player, Arizona Western defensive end Anthony Olobia, who ranked as the No. 2 juco D-end in the country, drew the biggest interest all the way down to the last minute.

“He had some big-time schools involved with him,” Weis said of the 6-foot-5, 241-pound pass rusher, “including one of the two teams in the national championship game that was still trying to get a piece of him even (Wednesday).”

Even with James Sims graduating, the Jayhawks still have quality depth in their backfield, with Brandon Bourbon, Taylor Cox, Darrian Miller and Tony Pierson returning for 2014.

Although it wasn’t necessarily the plan from the start, the position grew deeper with the recent recruiting class, as the Jayhawks added four-star Gardner-Edgerton running back Traevohn Wrench and No. 1-ranked juco back De’Andre Mann.

Weis said he believed Wrench had the potential to become a star. As for Mann, who was first discovered by quarterbacks coach Ron Powlus, Weis said he simply was too talented to pass up.

“I really didn’t intend to take a junior-college running back,” Weis said. “I kept on looking to shoot holes in (his film), and there weren’t any holes to shoot. ... He’s coming in here to try to beat everybody out, and that’s what I really liked about this kid.”

Quarterback T.J. Millweard, who transferred to KU from UCLA last summer and had to sit out the 2013 season, is a part of the 2014 recruiting class and will get a shot to prove he’s the right guy to lead the Kansas offense.

“He will be in the mix here in the spring,” Weis said of the 6-3, 210-pound sophomore who ranked as the 23rd-best pro-style QB in his high school class. “Throw him in the race.”