Texas forward Jonathan Holmes turns for a shot over Kansas guard Andrew White during the first half on Saturday, Feb. 1, 2014 at Erwin Center in Austin, Texas. 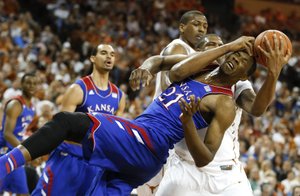 Austin, Texas — A young, hungry, cohesive Texas basketball team stormed out of the enormous Big 12 shadow cast by Kansas and there went the Longhorns’ anonymity.

By whipping the Jayhawks, 81-69, Saturday in the aging Erwin Center, the ’Horns tore the veil off of their secret: They’re a very good basketball team, a bona fide contender for the Big 12 title.

At least they were as the hunters. Now, with a victory over a ranked opponent for a fourth consecutive game, they’re one of the hunted.

Texas coach Rick Barnes, in the  aftermath of the wire-to-wire pummeling, already resumed working on his players’ heads.

“It is such a fine line between winning and losing that if you start drinking the poison and think that you are there, it all gets away,” Barnes said. “This is one game, and I want them to enjoy it because they should, but we have a long way to go.”

And they just added a backpack full of bricks known as expectations and mirrors that look better to their journey.

Kansas knows all about those.

KU’s young players — who play in front of a sellout crowd every night at home and many nights on the road in a program that stretches a red carpet reserved for the national media all the way to the tarmac of Kansas City International Airport and back — constantly are reminded by such circumstances of how special they are. That’s a lot of poison, but for the most part they have had the discipline to avoid it.

But it can’t be easy, which is why periodic reminders that diving all over the court for loose balls can mean more than special talent can refocus a team.

Texas did that for 40 minutes, Kansas for 20. Consider the Jayhawks reminded.

They don’t need a reminder that national rankings for high school players mean nothing. They aren’t the ones doing the ranking, just the ones ranked. But this certainly was a perfect game to demonstrate that.

Andrew Wiggins, No. 1-ranked recruit by Rivals, was handcuffed by Texas utility man Demarcus Holland. Texas freshman Isaiah Taylor, ranked the No. 302 recruit by another service, was, according to KU coach Bill Self and anyone else who had a good enough seat to watch the action, “by far the best player in the game.”

Taylor whipped around KU’s guards as if his first name were Tyshawn. He scored 23 points, made half his 14 field goals, 1 of 2 three-pointers and all eight free throws.

“I thought Texas was the hungrier team today,” Self said, expressing an indisputable opinion.

Pity poor Baylor, catching Kansas on Tuesday, when it is coming off a shellacking.

“That’s not being negative on our guys because when they come to our place, we better be the hungrier team,” Self said.

As is so often the case on the road, whether it be Kansas carrying suitcases or a Big 12 underdog visiting Allen Fieldhouse, it felt as if more whistles went the way of the home team. When that happens to young teams, it makes them more prepared for the next time it does.

Not that a disparity in energy, hunger and possibly even calls tells the whole story of the scoreboard. Texas is a team with parts that blend perfectly. They have two jets (Taylor and Javan Felix) putting pressure on defenses, a shot-blocker (Cameron Ridley) backed up by another one (Prince Ibeh) at center and a do-it-all forward (Jonathan Holmes, 22 points, four boards, three blocked shots), plus a defensive stopper (Holland) on the perimeter. They play so hard together, play so well. Can they resist the temptation to drink the poison?

And this is why the 'is the title race over' podcast was so silly.

After comparing remaining games for Kansas and Texas, I feel good about KU's chances to win the league again.

The title race is never over. Texas schedule has been mostly at home. They have to cine to Lawrence, Manhattan, Ames and Norman.They have a home conference loss. Lets not start counting KU out. Other than the bahamas KU has responded to losses well. Pretty difficult to go 18-0. Only one school has gone undefeated in Big 12 play and it ain't Texas. 22-8 record is pretty darn good

"Pity poor Baylor, catching Kansas on Tuesday, when it is coming off a shellacking."

We were also supposed to pity Texas Christian after getting owned at home by Oklahoma State last season, and we all know how that turned out.

Baylor has to on a confidence high after upsetting Oklahoma State, and they blew us out in last year's game in Waco. Why would they fear us? We have to bring our A game to the Ferrell Center, nothing less.

Agree - Baylor coming off of a big win in Swater. Tuesday will be a street fight. Our Jayhawks need to start the game hitting some outside shots (Wiggins / Tharpe / Ellis) - - confidence swells if that happens. Not flushing those buckets versus Lhorns gets the shoulders down and we just don't respond well to poor initial outside shooting.

The reason Baylor has had some big wins against KU in the recent past is because KU has played them the last game of the conference season and KU doesn't have anything left to play for. They've secured the conference and a high seed in the tournament, but Baylor has been a consistent bubble team that needs a big win just to make the tournament. Very different motivation for each team.

Win all games at home is the key. I think only KU and KSU are undefeated at home. Remember once March comes no one remembers a regular season game.

Texas has already lost at home to Oklahoma and on the road @Oklahoma State. I wouldn't be surprised if they lost @Iowa State as well. We just need to win this game @Baylor and, more importantly, get our effort level back to where it should be. I still think Kansas looks good to win the conference. They just cannot have games like that where they don't even show up to be competitive.

I had said before if we beat Texas last Saturday the race was over because we would have been 3 up on everyone and have beaten all the contenders once. Now, being only one game ahead of Texas the intensity for the conference championship has increased and that is okay by me. I don't want this to be a cake walk. I want us on our heels and feeling that every game is important so that we are playing with a sense of urgency.

Let's get better, learn, keep up the intensity because if this is a cake walk then we won't know how to turn it up a notch in March unlike Arizona who won their lousy conference the beginning of January. KSU, OU, UT, OSU, Baylor, ISU all have been ranked one time or another this season so we have the toughest conference this season. Buckle up your chin straps, put the women to bed, to win the title this year and complete the Decade of Dominance we better be ready to finish the job and fight, scratch, claw so that we keep winning.