Kansas guard Evan Manning looks to pass inside against Oregon State guard Challe Barton during the first half on Friday, Nov. 30, 2012 at the Sprint Center in Kansas City, Missouri. 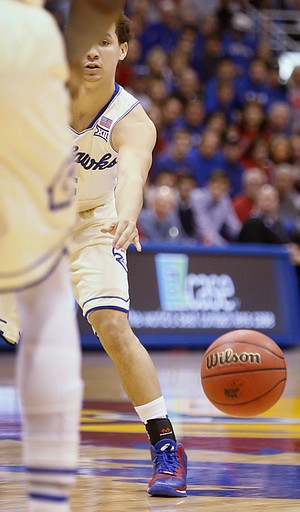 For the junior who spent his entire childhood in Lawrence — playing basketball at Southwest Middle School and Free State High before joining the Jayhawks — Manning’s front-row seat to the Kansas program allowed him to experience moments not every young baller gets the opportunity to enjoy.

Thus, Evan had great seats to most games and often traveled to the high-profile road games. He attended his share of KU practices and got to know some of the best players and biggest names to come through Allen Fieldhouse on a personal level.

But while Manning marveled at every shot made by Sherron Collins and rebound ripped down by Thomas Robinson, some of his closest connections were developed with players whose role he now occupies on the end of the Kansas bench.

The first such connection came when Manning was in second grade. Every time he walked into Allen Fieldhouse for a game or a practice, one player always made time for him, with a handshake, a high-five or simply a smile.

“I remember back when my dad wasn’t even coaching and I would come to the games,” Manning recalled. “Stephen Vinson was a guy who always would say ‘What’s up?’ to me. I’d walk by the bench, and he’d always give me a high-five, so he was my favorite player for the longest time.”

Back then, Manning did not spend too much time thinking about his own basketball future. He loved to play. He loved to soak up as much knowledge from his father as he could. And he loved the Jayhawks. But the idea that he one day would fill the same role that Vinson — a Lawrence High graduate — had was never in the picture.

Now that it has become his reality, Manning said he has to focused on keeping things simple.

“I go out there, and I know my job is get the ball moving from side to side and make sure we get a good shot every possession,” he said. “That’s just basketball. That’s my job. It was at Free State. It is here, so ...”

So, regardless of whether coach Bill Self calls on him to play more minutes while freshman Devonte’ Graham or sidelined or if he retains his role as a walk-on who only checks in late in the game, the 6-foot-3, 170-pound, junior guard vows to prepare for games as he always has.

“It would be more exciting,” Manning said of playing more. “But, at the same time, you gotta go at it with the same mind-set as always. You have to be ready to win every possession, and that’s what I’m gonna try to do if I do get more opportunities. Coach does a good job of giving us all confidence. It’s a simple game. Whenever you make the simple play, something good will happen. That’s the great thing about our offense: There are so many options. You hit the open guy, and then the next option will be open. It’s basically just playing basketball, having fun and competing with your teammates.”

As for whether he has found a way to fill the role that Vinson once did for him, Manning said he made it a priority to keep that part of the walk-on tradition going.

“Coach (Jerrance) Howard’s son, J.J., is one of my favorites,” Manning said with a grin. “He’s gonna be a stud.

“But there are a bunch of kids you see around here, who come to our camps and you always meet ’em at camps, and they go through the autograph line and say, ‘Hey, remember me?’ and you actually do remember. ‘Yeah, you’re the kid who was wearing the headband at camp,’ and stuff like that. It’s just a lot of fun.”

This is a move of necessity, obviously; but it wouldn't have happened were Kansas not desperate at the point guard position. Reality is that Evan at his position is not his father at his. Here's hoping that Manning can steal us some time until Graham returns without hurting us too much. Lace em up and get in the game Evan.

Yes, it could hurt. Manning isn't good enough to be logging meaningful minutes against Big 12 teams.

Evan is being given a chance to help his teammates, school and fans. Let's all give him that chance without question. Evan very well could win us a game down the road and amaze many of his doubtors. Go Gettem Evan. Merry Christmas to all.

I agree with you wholeheartedly. I remember a lot of the questioning comments when Ryan Robertson had to fill in for ten games when Jacque Vaughn was out for awhile. Everyone thought we were gonna slide down the ladder without Jacque. But, with Robertson, we went 10-0 if I recall. Evan may note be Devonte' but he's capable of filling in for some decent minutes.

Evan would not be in this position unless he can handle it. Neither his father or coach Self would make that kind of mistake. He probably won't see more than a few minutes on the court, maybe twice a game. He won't make spectacular plays, he won't make terrible plays. He will keep the ball moving on offense and be in position on defense. He will personify the "glue guy".

Those minutes will provide Frank the vital "sit down and get ready to go back in" time he (like everyone) needs to stay at the top of his game.

Awhile back Self commented we don't want to wear Frank out before the season is over. I suspect Manning will get more minutes than we think, except maybe in games where we're fighting a tough battle to win, just to keep Frank fresher down the road.

I also keep going back in my mind to a recent comment by HCBS that "We were actually better with Manning in there." I'm not saying he's better than Frank. That's definitely not the case. But we play decently when Evan is at the point.

There's been 2 games where Evan has run point with the regular rotation guys, late in the Kentucky game (KU was getting blown out) and late in the Lafayette game (KU was blowing Laf. out). The two things those situations had in common was there was no pressure on Manning. The results of the game were not in doubt and players usually play pretty relaxed when there's no pressure on them to perform. There's a reason why Selden has done the vast majority of the back up PG minutes since the Graham injury and it's because Self trusts Selden more than Manning in situations that can impact the outcome of games.

If Evan handles his business at the point this year, Self should consider giving him a scholarship next season.

I would just be happy if he made a basket.

No he shouldnt. Evan can afford to pay, and that scholarship can be used to bring in a big impact player.

You can tell when Evan is out there that he knows the system and is not a bit intimidated to be on the floor. He might not physically be as talented as others but mentally I can not help but believe he is at least their equal. I can see him providing valuable minutes of rest for Mason and perhaps be a good option against a pressing team when a third, level headed, ball handler is needed.

Guys, I'm sorry. But the Christmas spirit has made everyone delusional.

Evan Manning is an unranked, non-recruited player who was gifted a spot on the KU roster solely because his dad was a tremendous player here. That's reality. He wouldn't have sniffed D-1 but for the fact that his last name was Manning.

There is no deserves about it. The only reason why he is even being discussed is because of roster issues. As Self said, "emergency."

It's just comical how all of a sudden a decent high school player becomes "valuable", or considered for a "scholarship". We make unfounded declarations that he "won't make terrible plays" and that he's a "glue guy." And that he should be "given a chance without question."

Do you all really understand how silly all that sounds?

The only place Evan Manning should be playing point guard is at Washburn or Emporia St. If he's that good, why doesn't his dad have him over to Wake Forest to back up their point guard?

Thanks Jack, I was reading these comments thinking what in the world have they put in their egg nog? Some of these are down right hilarious.

I like Evan, nice kid and all. I think he can spell Frank a few minutes each half, he has to or we risk wearing Frank out and he is our best and some games only player. There should be no doubt however that this is like playing your third or fourth string quarterback in the NFL. Sure he can run the plays, but you really do not want him in there unless the game is basically over.

You nailed it pretty hard but that's reality. I couldn't agree more with you.

Let's hope Graham will be back in no time. Can't wait to see him back in action. We are about to watch a whole fresh KU team soon:

Thank you for saying it.

As far as a scholarship is concerned, they are very valuable. Evan doesn't need one, I think Danny can afford to pay for his school. I'm sure he will do a respectable job at point.

I am not sure of that. At all. If we need to get meaningful minutes from Manning then KU is in serious trouble. I respect all he does for this team but no.

Evan will only play third string. Mason will start and Selden is the primary backup since that is what he has to learn to do in order to play in the NBA. Evan gets the tweener minutes in the rotation. In the meantime I bet Self could kick himself for not having a little loyalty and announcing Frankamp as the season starter and it's his job initially to lose. CF would have stayed and we wouldn't be having this discussion.

CF couldnt unseat Mason, and Mason's 3pt% improvement must have been an eye-opener to CF. I agree CF would have played if he stayed, but he just didnt want to. He knows Self favors the attack-dog, physical type of PGs, and that is not, nor ever will be a description of Connor Frankamp. I wish him well at WichitaSt.

Does anyone remember "Danny and the Miracles"? One of the guards was on a football scholarship, and I think the only reason Coach Brown played another one of the guards was the guard had enough guts to throw the ball up for grabs in Danny's direction, and trust that Danny had enough desire and ability to go get the ball and make the play. Athletically, that year (1989), Duke and OU, as well as many other teams, could run circles around KU. But Danny and the Miracles had the attitude and confidence, as well as a brilliant coach, like we have now, necessary to deliver the results, giving us fans the ride of a lifetime.

Evan, as a former football manager for KU I have an idea of how much work and effort you put forth to be a part of the team. You're the best we have, and we're behind you. Remember to use your head as well as your body and you'll do just fine. We're proud of you and we support you. Thank you for your time and effort.