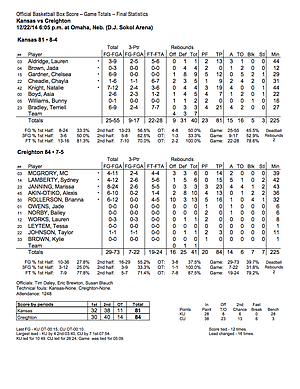 Omaha, Neb. — Creighton guard MC McGrory hit a tying three as time expired in regulation, and the Bluejays carried that momentum into overtime in an 84-81 women’s basketball victory over Kansas University on Monday at D.J. Sokol Arena.

KU (8-4) led, 68-67, with three seconds left in regulation, and freshman Lauren Aldridge hit two free throws to make it a three-point game, but Creighton (7-5) advanced the ball just past midcourt and called a timeout. McCrory caught the inbounds pass near the top of the key, took one dribble and let fly with a defender in her face.

“We can’t be so different on the road than we are at home,” KU coach Bonnie Henrickson said. “At some point we have to recognize and admit who we are and then play. Everyone can play. That’s the most disappointing thing. We didn’t have toughness and get them off the glass. We have to score on the offensive glass, and our seniors have to be great. We’re only going to go as far as they take us.”

She hit six of nine floor shots and two of four three-pointers. Senior guard Natalie Knight tied her season-high with 19 points, all in the second half or overtime, and Aldridge contributed 13 points.

Before the game, Kansas announced that sophomore guard Keyla Morgan had been medically disqualified and will no longer be able to compete for KU. She has an undisclosed medical condition.

Morgan had sat out the previous five games.

She averaged 18 minutes over six game with 4.2 points and 2.8 rebounds per game.

Kansas will play host to Samford at 7 p.m. on Dec. 29 at Allen Fieldhouse.