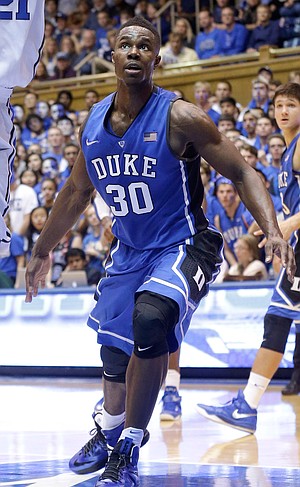 Kansas University on Monday was one of many schools to inquire about Duke forward Semi Ojeleye, who has decided to transfer. The 6-foot-7 Ojeleye, who averaged 3.0 points in six games for the Blue Devils, played in 17 games a year ago. Ojeleye, whose brother was a walk-on at Kansas State, chose Duke over KSU, Indiana, Oregon, Missouri, Stanford, UCLA and Wisconsin his senior year at Ottawa High.

He has said he wants to make some visits before picking his new school. KU has two scholarships to give in recruiting, more if players turn pro or transfer after the season.

Schools such as Missouri, Maryland, Indiana, Butler and Wisconsin have also inquired.