Forward Jada Brown dives to the ground with Amanda Lawson of Arkansas State to try and gain possession of a loose ball in the second half Sunday at Allen Fieldhouse. 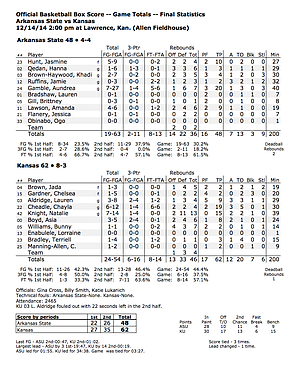 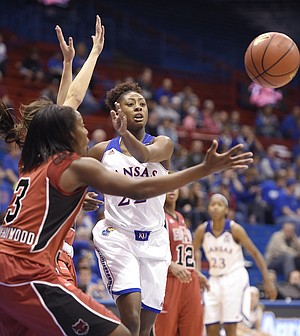 No one needed evidence of senior forward Chelsea Gardner’s worth to the Kansas University women’s basketball team, but her absence most of the second half Sunday against Arkansas State provided a reminder.

The Jayhawks had trouble putting away the Red Wolves at Allen Fieldhouse, with standout Gardner on the bench for 16 of the final 20 minutes. At least they proved there is enough talent in their backcourt to make things happen without their leader in a 62-48 victory.

Freshman guard Chayla Cheadle scored 16 of her career-high 19 points in the second half, senior guard Natalie Knight produced her first career double-double (15 points, 13 rebounds), and KU won what coach Bonnie Henrickson described as “an ugly one” by spreading the floor and running a different offense than they would have if Gardner had been on the floor.

ASU (4-4) cut the Kansas lead to two with 11:24 left on a three-point play by Aundrea Gamble (game-high 20 points). But KU’s next four baskets came on layups — two from Knight, one from freshman guard Terriell Bradley and another from senior Asia Boyd — and Henrickson said the Jayhawks (8-3) became comfortable by playing smart.

“We’re fortunate we’ve got four guards, and Asia and Chayla have some decent size. … But also, Jada (Brown, 6-foot sophomore forward) has become more confident and comfortable facing, playing at the three, and just trying to reverse the ball and get people threes.”

Boyd sunk two of her four from behind the arc, as did freshman point guard Lauren Aldridge (nine points, three assists). But Boyd (eight points, six rebounds) played the role of facilitator on KU’s biggest three-pointer of the game. She dribbled and kicked the ball to the right wing for Cheadle, who knocked it down and drew the foul on her way to a four-point play that pushed KU’s lead to 11 with 4:12 remaining.

“Chayla stepping up with that kind of contact and knocking that down is huge,” Henrickson said.

Added Cheadle: “I just shot it with confidence, and it went in, and I feel like that was a momentum play for our team to grow the lead.”

The next Kansas possession, Cheadle converted a long jumper from the opposite side of the floor. Later, she turned a spinning drive into a layup to put Kansas ahead by 10 with 1:02 left.

“If the ball comes to me, and I’m feeling it, I’ll take it,” Cheadle, a 6-foot freshman from Columbia, Missouri, said. “But I’m looking for my teammates if they’re open.”

Gardner committed three first-half fouls, and Henrickson elected to keep her on the bench to start the second half to avoid a fourth. In her absence down the stretch, senior Bunny Williams grabbed seven rebounds in 12 minutes. Gardner didn’t sub in until the 7:45 mark of the second half, and she only lasted 1:11 before picking up her fourth and going right back to the cushy courtside seats.

KU’s best player finished with an unfamiliar stat line: two points, 1-for-5 field goals, 20 minutes. It snapped her 27-game streak of double-digit scoring outputs. She hadn’t finished with two points since a loss to Duke in the Virgin Islands early in her junior season.

Still, Gardner reached a bit of a milestone — her three blocks gave her 150 in her career, moving her past Aishah Sutherland for second place in program history, and still far behind Lisa Tate’s 269 from 1991-94.

Knight, who outdid her previous rebounding best by five boards, said KU just had to adjust to life without Gardner for a while.

“I think really we just relied on our defense in the second half,” Knight said, “and being able to get up in them and turn them over and then get points in transition.”

Kansas will have eight days off before resuming its nonconference schedule Dec. 22 at Creighton.