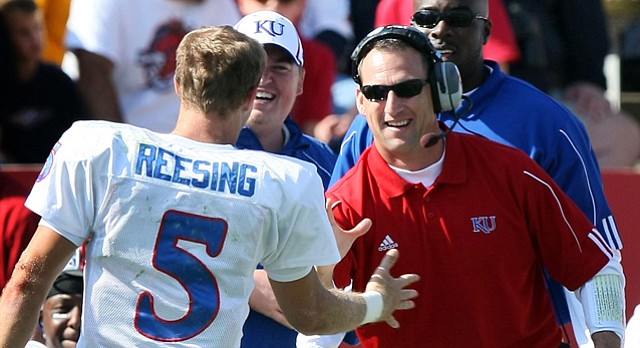 Kansas University receivers coach David Beaty, right, congratulates Todd Reesing on a play in this file photo from the 2008 season.

A little less than eight hours after the news first surfaced, Kansas University officials confirmed this evening, through a press release, that David Beaty had been hired as the school's 38th football coach.

“I am very excited to be back at Kansas,” Beaty said in the release. “I am especially excited that Clint Bowen has agreed to stay on as assistant head coach and defensive coordinator. Clint will be a huge part of our success going forward and I am fortunate to have him on my staff.”

Athletic director Sheahon Zenger and a search committee that included consultant Chuck Neinas identified Beaty as the replacement to former KU coach Charlie Weis largely because of his reputation as an up-and-comer in the profession.

“David Beaty is well-respected in the football community and brings to KU great vision, passion and energy,” Zenger said in the release. “He has a bright football mind and is known as one of the best recruiters in the nation.”

Beaty, 44, comes to KU on the heels of three years as the Texas A&M wide receivers coach and recruiting coordinator.

Under Beaty’s tutelage, the Texas A&M wide receivers have been a record-setting group. With first-team All-American Mike Evans leading the way in 2013, the Aggies set team records for receiving yards, receiving touchdowns and completion percentage. Evans set the A&M record with 1,394 receiving yards and matched the receiving touchdowns record with 12. He also shattered and re-broke the single-game receiving record with 279 yards vs. Alabama and 287 yards against Auburn. Evans went on to become the Aggies’ first wide receiver to be selected in the first round of the NFL Draft. Texas A&M was the only team in the nation with four 50-catch, 600- yard receivers in 2013.

During his first tour at KU, he helped receivers Kerry Meier and Dezmon Briscoe develop into NFL-caliber players. Meier, who was taken in the fifth round of the 2010 NFL Draft, received All-Big 12 accolades in 2008 and 2009, while Briscoe, a sixth-round selection in the 2010 NFL Draft, was an All-American and first team All-Big 12 pick in 2009. In 2008 five different KU players produced a total of 15 100-yard receiving games. Among the school records set by KU wide receivers in 2008 were season receptions, game receptions, season yards, game yards, and season touchdowns.

“I am pleased to welcome Coach Beaty back to the Jayhawk family,” KU Chancellor Bernadette Gray-Little said. “He is an outstanding fit for the University of Kansas and his work to build a competitive football program will advance our athletics department and the reputation of KU nationally.”

Beaty and his wife, Raynee, have two daughters, Averie (15) and Alexa (10). They are all in town and are expected to be at tonight's KU basketball game between the Jayhawks and Florida Gators at Allen Fieldhouse.