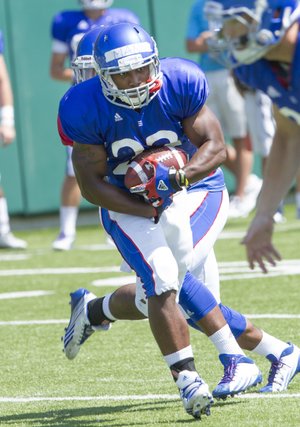 Sometimes athletes wear an assigned number. Others ask for a specific number because of what it means to them.

De’Andre Mann, either No. 1 or No. 2 on the depth chart at running back in the wake of injuries to seniors Brandon Bourbon and Taylor Cox, wears No. 23, and it has nothing to do with Michael Jordan.

It might not take Mann long to get to know all of us his teammates. He’s accustomed to big families.

Mann rejected offers from Georgia State and his hometown University of Miami (Florida) to come to Kansas after an amazing sophomore season at Hartnell College, where he rushed for 1,706 yards and 27 touchdowns. He also caught 27 passes for 331 yards and three touchdowns.

All highlight films look great — that’s why they’re called highlights — but his really is something else. He’ll face far tougher competition for KU, obviously, but he does have some serious make-the-tacklers-miss moves. At 5-foot-9, 195 pounds, he’s not the biggest on the field. Then again, neither were the Hall of Fame backs whose highlight tapes he knows by heart.

“Two favorite running backs … Walter Payton and Barry Sanders,” he said when asked to name his favorite. “I watch them every night before I go to sleep. I try to be a mixture of both. I try to do the Walter Payton high step, and when I break a guy down, I try to break him down like Barry. Walter didn’t break them down like Barry, but he had the high step to slow them down so he could make cutbacks when he needed to. Barry, he could just do everything, shake you out your shoes.”

Mann said he felt comfortable at Kansas right off the bat, in large part, he said, because two players took an immediate interest in helping him. Bourbon (knee) and Cox (Achilles) suffered season-ending injuries, but according to Mann, continue to offer the same help to him since the day he arrived.

The only thing I took away from this article is his dad has 22 kids. Am I the only one that thinks that is INSANE? I mean they could field an entire football team both sides!

Hopefully KU gives them all family tickets. That'll fill half the stadium.

My take from the article is this young man has maturity, and a believe in God taught by his Grandmother. He understands thru God ALL things are possible. His life perspective is more advanced than mine at his age. He's been given an opportunity, I pray he takes full advantage and has an "INSANE" rushing season setting up a prolific pro career. Keep dreaming young man, and God bless!

I hope he gets a quality education from the University of Kansas. This is something I hate is assuming that he can only make a good life playing football. I was kidding about the my take away and I think most people caught my sarcasm. Yes I hope our team does well but above all I hope these young men make our university proud on and most importantly off the football field.

When I think of Walter I don’t think about the high step or cutbacks. All I think of is him assaulting tacklers with raw power and drive. That man never ran out of bounds, and he made sure to lay the wood on somebody every single play. It’ll take more than watching videos to be like him. Start running those hills.

He has something to play for and seems very mature. With his experience in college, albeit junior college I presume he is the #1 back to start the season. Since none of our now top 3 backs is very big I can see a running game by committee.

All Mighty Sayers, oh Holy Riggins, please let this young man have a great season avoid injury and off the field trouble. Amen