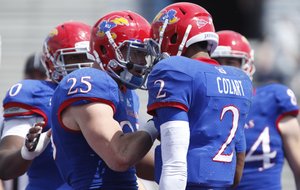 TALE OF THE TAIT

— What Montell Cozart as the starting QB means for Kansas football

Now the hope is that Cozart will be one of the best quarterbacks in the Big 12 this fall.

“After the completion of post spring ball evaluations and individual player meetings, I met with the offensive staff and we have decided to name Montell Cozart our starting quarterback,” Weis said in a press release.

Cozart showed flashes of talent as a true freshman in 2013, starting three games and appearing in four more, but he lacked consistency and entered spring practice as part of a wide-open QB competition. Last year’s starter, senior Jake Heaps, and UCLA transfer T.J. Millweard, a sophomore, were also in the mix.

Coaches said this spring that all of KU’s quarterbacks did a nice job picking up the new offense brought in by first-year offensive coordinator John Reagan, but Cozart’s growing maturity and consistency, along with his ability to make plays with his arm and legs seemed to be the difference.

In his debut season, Cozart ran for 214 yards and threw for 227 more by completing 23 of 63 passes, or 37 percent. Earlier this month, Weis noted that Cozart had completed 75 percent of his passes during spring practices. And Cozart’s mobility and ability to put pressure on defenses as a runner were a clear fit for KU’s new offense during last weekend’s spring game, where KU’s quarterbacks could be hit. Cozart had seven carries for 70 yards and two touchdowns in the scrimmage, and he completed a team-best six of 10 passes for 58 yards.

“Every day I just try to get better, just go out there and compete and gain more confidence,” Cozart said earlier this spring. “That’s what’s going to help me in the long run. One of our mottos is ‘Just get better each day.’ No matter how practice went, did you get better?”

Midway through the spring, Cozart got his chance to function as the Jayhawks’ unquestioned No. 1 quarterback. Coaches held out the more experienced Heaps out of significant portions of one practice to see how Cozart would respond.

Cozart made it clear that, mentally, he was ready for his second season.

“Yeah, I wish we were done with summer workouts and all that,” he said with a laugh. “I wish it was September and we were getting ready to play our first game. But it’s been a great process and I’ve definitely been able to learn and get better and I needed it.”

Why announce this now? Every week during the season we should say "we don't know who we are starting"... Why not leave defenses teams guessing so they can't gameplan around him?

There is a huge difference in the mindset of the QB going forward. Now he can visualize the offense on game day, without distracting himself by watching what Jake is doing.

I have a strong feeling that Terry was sarcastic with his comment. I too think that it is a great move, and will help us in the long run. I am not too sure how Heaps would react to it, but that was a gamble on his part when he came to KU.

Well, I think he has a legit question. Coaches do this quite a bit in college. Keeping defenses guessing is a good idea, if you have two qb’s that can hurt you equally, but in two different ways.

But I think Reagan sees we have one guy who is clearly better and he’s giving Cozart all the help he can, by announcing now and giving the young man more time to adjust to the role of leader.

So Terry, you are saying if we never openly say who the starting QB is all season then the opposing defenses will be confused? Maybe you should tyyyyyyyypppppeeee sloooowweer Terry. Or, our tricky covert operation of who the starting QB won't get figured out after the first game against a scrub team?

You know, the way we've been playing the past few years, other teams haven't had much trouble figuring out how to beat us, so I'm not sure how this changes that, unless the O-line is vastly improved over last year and our D is substantially better than what it's been.

This announcement only does good- for many reasons. The one thing that it doesn't do is inform anyone of anything. Everyone, including the opposition, already knew. The separation is very, very clear.

It does a ton of good. Keeping the defense guessing is just a fall back for “we don’t have a good QB.” If we had a solid offense with two effective QBs, one runner, one pocket, it might be different.

The pros of publicly handing him the reigns now, are giant boosts of maturity and confidence. The kid’s a true sophomore. The cons? Like Brett said, I don’t think the Big 12 has us circled on the schedule just yet. Maybe we worry about the opposing defenses' game plan after we start completing some passes.

Besides, it would be impossible to secretly make him the number one. He needs to get the number-one snaps and the number-one attention of his coaches. You think Matt wouldn’t sniff out a starter whether they announced it or not?

The Big 12 has us circled in crayon because we don't scare anyone. It won't matter if we keep it a secret or tell them Martha Stewart is our QB. After the first game everyone will know. We just need to figure out who all of our starters are, the guys who can contribute off the bench this year and get ready for the season ASAP.

Montell needs to gain some weight; he is going to take a beating in our league with his mobility.

I think this is another example of HCCW not being stubborn. Weis likes his prototype qbs. Cozart isn't really that but I really like his potential. His legs are special and he has potential with the arm. Fixing !mechanics and reps will go a long way with accuracy. We get to watch this kid for 3 more years!

I would believe that Reagan made the final call on who the QB is. Now he can focus on getting chemistry with the offense, especially once the line figures itself out, which hopefully is very soon. As long as Cozart stays composed, improves his accuracy and runs when needed. He needs to be a leader in all facets and I don't want us playing musical quarterbacks either. The more consistent we are in who is playing the better.

I imagine that so, which is encouraging because that means Weis is letting his OC be the OC.

Good move, KU's not good enough to scare anyone so keeping this decision a secret isn't a big deal. Cozart now has the public backing of the staff and full confidence that the job is his.

This football program is an absolute disaster. Zenger should have done himself...and...the rest of us a favor...by grabbing Mangino before Iowa State did. It's gonna be another long year boys.

David A. Smith 8 years ago

Nostalgia is not a strategy. We all remember the good ol' days. And, I wasn't aware Zenger had anything to discuss. We all have a right to how we feel, but you two have nothing sensible to say about the topic. And, if you want to do more than just feel bad, do something positive and stop putting things on this board that most definitely has an impact on recruiting!

Got no stomach for a rebuilding project? Now wouldnt Bill Self call y'all "soft"? Go watch some NFL, or something! Go on...git!

The realistic target for this season should be .500 ball, and fighting for bowl-eligibility. Weis dismissed 25+players when he arrived, as their academic/off-field/and football-related performances simply were not acceptable. If the WR "hands" issues are finally improved, think of how many more of last year's critical drives are kept alive?

Gotta be good to compete in the BigXII, and we have to show steady progress to get good.

Heaps has no elusiveness in the pocket. And he isnt going to change his m.o. as a classic pocket passer. Cozart is the right move. If Cozart goes down, but the WR's + Harwell can actually catch...then even Heaps as a backup will look a lot better than he did last year. Watch the O-line progress. Being the backup actually places less pressure on Jake Heaps. Also, imagine Heaps confidence level once his WRs (& Harwell) actually develop chemistry catching the ball?

As KU alumni, I'm not going anywhere for the next 50yrs...I'm in it for the long haul...I got nothing but time. But this year's expectation definitely is around .500 ball. We'll see...

You 2 have to be the same person under 2 different alias'. Doug, you say the same thing in every post; bring back Mangino. Please add some depth to these message boards instead of repeating the same BS that will never, ever, come to fruition.

BTW, Mangino got very lucky with Reesing; he had no idea the kid was going to be who he was which is what saved his job. Think about that.

And who thinks if 100 college players on the team know who the starter is that such information would be withheld from the opponents? Naivete!