Under the radar: Five Jayhawks who could surprise

By now, with the 2013 season opener a week away, those who follow Kansas University football surely have had their fill of the updates, predictions and predicaments facing the Jayhawks as they enter their second season under coach Charlie Weis.

From the importance of keeping junior quarterback Jake Heaps healthy to the changes the team has made on defense to try to keep up with the Big 12’s fast-break offenses, just about everything has been covered at least once between spring football, summer workouts and fall camp.

While many names such as James Sims, Tony Pierson, Jimmay Mundine and newcomers like Cassius Sendish and Marquel Combs have become popular with Kansas fans, here are a few Jayhawks flying under the radar who could play important roles before season’s end. 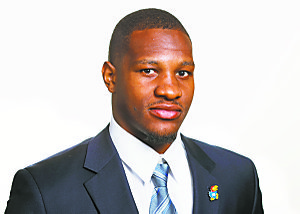 Senior Charles Brooks, No. 86 — Four tight ends were on the Jayhawks’ first fall camp depth chart at the beginning of August, and Brooks was not one of them. Three weeks later, after showing sure hands, running good routes and becoming more reliable, Brooks may have carved out a role for himself. 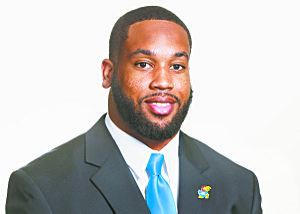 Senior Randall Dent, No. 64 — Newcomers Mike Smithburg and Ngalu Fusimalohi have been pencilled in as starting guards since the spring, but neither has played a down of Div. I football. Dent has. And when you consider he’s often mentioned as one of the strongest linemen on the roster, Dent’s combo of power and past playing time make him a luxury who could fill in at either spot if need be. 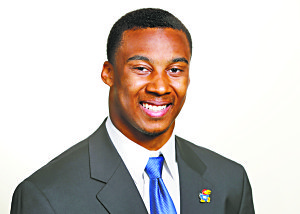 Sophomore Tre’ Parmalee, No. 11 — The wide receiver impressed coaches enough last season to earn snaps as a true freshman. Weis and company have upgraded the position this offseason, so Parmalee again will have to earn every route he runs. But regardless of what he does as a pass-catcher, don’t count him out as a potential player in the kick-return game. 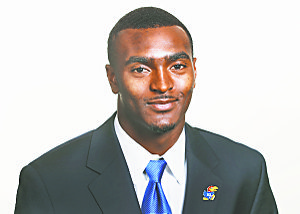 Junior JaCorey Shepherd, No. 24 — A lot has been written about Shepherd’s transition from wide receiver to cornerback, which came on the fly in 2012. The talented athlete with great speed and good feel had the benefit of an entire offseason to work on his new craft. He may not enter the season as a starter, but his natural ability combined with an ever-expanding understanding of how to play the position should make him an important piece of the KU secondary. 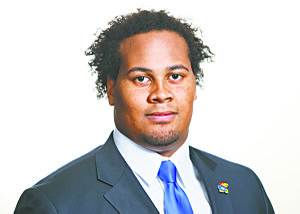 Senior Jordan Tavai, No. 9 — Despite not receiving much attention, the versatile defensive tackle was right there with veterans Keba Agostinho and Kevin Young in terms of having a fantastic August. With a year of experience working for him and a more fit frame allowing him to make more plays, Tavai could be a key part of the rotation on the D-line.

While we are looking at players below the radar, is there any news on Pearce Slater? It seems like he has dropped off the face of the earth or at least the LJW sports writers radar.

He's likely gone, and even if he does return, they probably would have to redshirt him this year. Maybe he is waiting until after the Labor Day holiday to return, but it's probably time to accept that isn't coming back this year. I'm okay with that. It's game week now. Time to turn the game faces on.

He's gone. He went back to his juco.

Jacorey Shepherd has the speed to make a difference in games. He has closing speed. If he has learned the position well enough, he could be an excellent cover man and get some INTs. If Kansas is able to play press coverage this year, Jacorey has a chance to land on an NFL roster this time next year.

I think Charles Brooks and Randall Dent will be reliable. The coaches obviously know better than I do, but I think Charles Brooks will be able to get open this year, and I think some other teams may not be able to cover us one on one and will have to try to zone us. Brooks is a guy that can find a weak spot and be a guy that may not have a big yards per catch, but get quite a few catches for between 5 to 7 yards and if we send 4 wide receivers out, he might be able to find a whole behind a linebacker and force the other team's defense to cover him which will take some pressure of the OL and give Pierson and Sims more opportunities to make plays. Dent, if he has matured, should be able to provide solid depth if not be the starter after a few games. He's the strongest guy on the team, and if he can pass protect and run block effectively on a consistent basis, he'll rise to the top of the depth chart. With that said, he will be a guy with at least a valuable role.

Parmalee will be able to spell Pierson, but more importantly it will be his ability on kick-off returns that we need and I think the other guy back deep will be Ford or maybe Cox. Parmalee isn't as fast as Pierson, but if he has good vision and patience to let the wall set up, he'll have be run down from behind often this year.

Tavai has a high ceiling. I think the depth on the defensive line will help them all as well as the depth at linebacker and the flexibility of a couple of our safeties.

I'm really excited for this first game. We'll know a lot more then.

ESPN3 will be streaming the game in areas where it isn't televised on the Jayhawk Network, but it's also on ESPN Gameplan. That might mean that the region might be just a little bit bigger but it will likely be for South Dakota and Kansas.

Also, if you go to Wiziwig.tv it may be streamed there online. You just have to get something to block the ads, and if you don't do that it's extremely annoying. You also need to beware of viruses. I used that this past weekend and was able to watch any NFL game I wanted on Thursday and some of the games that included our future opponents except for those that were nationally televised. I was also able to watch the Iowa State game. The only one I couldn't watch was OU.

If he shows up at OU next year, look for him on the bench or on the ground.

Good article. Despite my ongoing pessimism about this team and the possible number of wins versus losses, I do think there is much more quality depth than last year. It isn't the depth quality of the top tier Big 12 teams, or maybe any other team in our conference, but I think it is one of our biggest overall improvements. In football, this is huge because guys are going to get hurt and miss games, and it can either be managed or it can destroy a season. Come on Jayhawks, go out and get that first win!

I'm expecting good things from Tavai. With more talent around him, conditioning, and experience, he has a shot to be real productive.
I won't call him Boom or Bust, because he might be a year away, but I think Coleman at WR has a chance to be big-time. We have a lot of uniforms at WR, but we need some productivity.

Has everybody went to capitalone.com to vote for Big Jay in the mascot challenge

Sorry to disappoint you but I always vote for UNLV's stripper mascot.

Is it my imagination or has Parmalee put a bunch of weight (muscle) on? Holy cow. Only one full season and one off-season and he is already beefed up. Another encouraging sign.