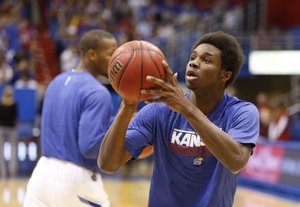 Kansas University junior point guard Naadir Tharpe will miss the season-opener on Nov. 8 against Louisiana Monroe after he illegally played in a summer-league game in Chicago, KU coach Bill Self announced after KU's 97-57 exhibition victory over Pitt State on Tuesday in Allen Fieldhouse.

“He played in it, (and) he wasn’t allowed to play in it, because it wasn’t from here and it wasn't from his own area,” Self said. "So he goes up there to hang out with 'Mari (Jamari Traylor, Chicagoan), and he plays in one summer-league game.

“So we self-reported that, because he didn’t get prior approval, which he would not have gotten because it wasn’t in his area. It’s a game for a game (penalty). Naadir can play in the next exhibition game, but he will not play in our first regular-season game.”

Self said backup point guard Frank Mason will play more in KU's next exhibition game on Nov. 5 against Fort Hays State. Mason also will start that game, Self said, to prepare for the opener.

Traylor also played in the Chicago summer league, but as Self stated, it’s allowable since he is from Chicago.

Red-shirt status: Self said it’s still possible he could red-shirt a freshman or two.

“We’ll make some decisions in the next week or so. Just because we make decisions doesn’t mean it’s the direction we’ll end up going,” he said.

He said frosh Conner Frankamp (zero points, two assists) was currently thinking too much, like all freshmen. He said Brannen Greene (10 points) needed to bend his knees more to “move quicker” but that he was definitely “talented.”

Weekend warrior: Andrew White III, who has been known to visit KU’s practice gym instead of heading out to the clubs on weekends, was rewarded for his work with 12 points and four boards in 15 minutes.

“I go in at 11 o’clock, midnight, it’s what I like to do, how I like to spend my weekends,” White said. “I’ve done it at a young age. I like being in the gym late. It’s not to get recognition or the word out I’m in the gym. I feel at night it’s a calm atmosphere for me to go in and work on things. I’ve become a big fan of late-night workous.”

TV time: Canadian TV network TSN will televise every KU game this regular season as folks up North keep track of the progress of Jayhawk freshman Andrew Wiggins. The majority of games will air live with some having same-day coverage on TSN platforms.

“There are many Canadian basketball fans who can’t wait to watch Andrew and follow the Jayhawks this season,” said KU coach Bill Self in a TV release. “When we have played in Canada in the preseason, a lot of KU fans have come to see us play. Now they can watch all our games on TSN, which will be great exposure for Kansas basketball.”

Early anthem: There was a mixup before the exhibition game in which the Star-Spangled Banner was played much earlier than normal, with the teams in the locker rooms instead of on the court.

By the way, I noticed Naadir changed his jersey number...? Was that out of deference to Wayne Selden, or did he want the #10 all along? And I thought Evan Manning wore #10?

Tharpe wore 10 in high school. He took 1 when Tyshawn had 10, had the opportunity to switch to 10 when Selden wanted to wear 1, so he took it.

...Now we have to wait to see how hard the NCAA comes down on us for this.

NCAA will probably give us the death penalty over this...

Andrew Wiggins, Joel Embiid, and Wayne Selden suspended for the season and we aren't allowed in the NCAA tourney for ten years making recruiting impossible and Self would leave for the NBA. And that's the best case scenario ...

I understand rules are rules and shouldnt be broken but someone please explain to me how Naa benefits from this ??? If anything he should be sat by Self for taking a chance of injury, but as usual Im sure the NCAA will hammer us for this idiotic rule...........

I read "KU's Tharpe banned for illegal summer game" on ESPN and my stomach literally dropped through the floor. I am glad it is only one game.

Typical ESPN though; story about UK's game was posted within minutes of it being over but no mention of ours until they can put that headline on it.

Funny. The same thing happened to me. I couldn't breathe for a second or two...

I wonder if there's a way to stream TSN coverage of KU games this season...:)

I hope that AWIII is also enjoying college life. The hard work is much appreciated, but you gotta make some time to cut loose a little bit.

I want to hear Oh Canada after the Star Spangled Banner, for Wiggins and the Canadian fans. Maybe that's why the anthem was played early, to give time for the next one.

But after "my home and native land" no one knew the rest of the song, so they just decided to go straight into I'm a Jayhawk

I'm just curious why Naadir is being forced to miss the opener. North Carolina player JP Tokoto is being punished for "unapproved participation in summer league games in Milwaukee" (per ESPN.com) and he will "miss the November 1 exhibition game against UNC Pembroke." Can anyone clear this up for me? UNC player gets to miss an exhibition game, KU player has to miss the season opener?

"Tokoto will be available to play in the season opener Nov. 8 against Oakland."

I can't believe he would Redshirt both Greene and Frankamp. My guess...due to Greene's length and ability contribute in other areas, Frankamp gets the Redshirt.

I believe there is YouTube video of Tharpe and Traylor in that summer league game. Tharpe evidently was the standout, as he hit 5 3s...