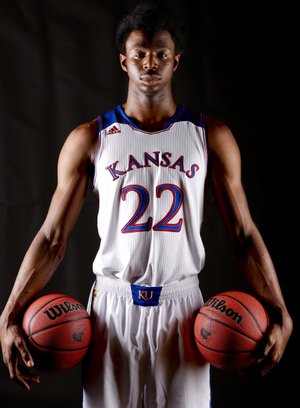 Andrew Wiggins, who arrived on Kansas University’s campus on June 15 for the start of his one-year college adventure, has picked up plenty of pointers from his new coaches and teammates.

Perhaps the only negative words uttered about Wiggins since he signed with KU on May 14: He has a tendency to take possessions off. The player who averaged 23.4 points and 11.2 rebounds per game his senior year at Huntington (W.Va.) Prep says that is the case no more.

“I think I play hard all the time now. There’s no upping my ability in how hard I play,” Wiggins said, asked if he thinks he’ll increase his intensity now that it’s time actually to compete against somebody besides his teammates.

Wiggins, who has played before the home fans at Bill Self’s summer basketball camp, Late Night in the Phog and in a recent open scrimmage, debuts with five other freshmen — Joel Embiid, Brannen Greene, Conner Frankamp, Frank Mason and Wayne Selden.

He said being part of such a large freshman group has been helpful.

“College basketball is way different from high school,” Wiggins said. “The physicality of it, the mental part. It’s all a different level. I think coach Self has prepared me to be who I am, the player I am on the court and off the court. It’s really a learning process for myself, for all of us.”

“He’s been running the floor excellent, has a great pull-up game,” noted sophomore Perry Ellis. “He’s been doing real well, getting better and better each practice. I look forward to seeing him (tonight). I remember I was pretty nervous my freshman year out there under the lights. I think they all (freshmen) are having fun. They’ve been working hard.”

Self conceded that this year’s exhibition games (KU also will play Fort Hays State on Nov. 5) might be more important than the past because of the presence of the six freshmen, plus senior newcomer Tarik Black. He said eight players have separated themselves: the probable starting lineup of Naadir Tharpe, Wiggins, Selden, Ellis and Black, plus Andrew White III, Jamari Traylor and Embiid.

“I want to see how guys react in different situations, and (Wayne) Selden and Joel and Tarik and obviously Andrew and Andrew White III and Jamari (Traylor), even Perry (Ellis) and Naadir (Tharpe), those guys need to get some ample minutes because they haven’t played that much,” Self said. “And if you do that, you’ve still got to get ... obviously Landen (Lucas) hasn’t played at all. That still leaves out Conner (Frankamp) and Brannen (Greene) that need to get minutes. It’s probably not going to be an everybody-is-going-to-play-17-minutes-type deal, but I’ll be excited to see how different guys react in different situations.”

It’s safe to say 16,300 fans will be most eager to see the much-hyped Wiggins, the No. 1 player in the recruiting class of 2013 who has already been on the cover of Sports Illustrated.

“I do think from this point forward, I don’t think he needs to do any more media. You guys will be upset with me. I don’t see why he needs to,” Self stated. “He can’t go anywhere without getting bombarded. It’s wearing him down. So I think that we should, from this point forward, remove as much of that as possible. If he plays well in a game, or when he plays well in a game, sure, he can do some postgame stuff, but I don’t understand why everybody wants to get a piece of him. We’ve already done that.

I either need to find out how to log on to justin,tv.. or the trick to log on to espn3 outside the coverage area

So I guess the only way we get to see the game in western Kansas is on ESPN3, witch we don't have with or internet provider.

Should be able to watch here

All this link did was give me a freaking virus when I downloaded the information. I think I would pass on this information.

I watch first row all the time... Just exit out of all ads

Does the pitt state/kansas game show up for tonight on it's "Basketball" tab? I do not see it anywhere posted?

I just hope we get to see most of the KU games.

Will the game be on Cox Cable tonight in Topeka? What will be the channel for most of the season in Topeka?

For anyone wondering about TV listings of the game in their area, www.kuathletics.com/tv is a helpful link.

What about online for those that live out of state.

ESPN3 doesn't service a lot of small markets in Kansas. Best bet is either justin.tv or frontrowsports. I was at least hoping jayhawk all access would show the game but it is radio only.

I can't believe that most of Kansas is not going to be able to watch the game tonight, this was a great idea, I guess if you don't live in Time Warner service area your out of luck. And we can't get espn3 out here either.

Tried to go to "www.kuathletics.com/tv" and it isn't available.

Football??? What Football ... It's Basketball time at Kansas .... Rock Chalk

Come on, man. Way to perpetuate that stereotype.

Hey look, one of the people Matt Tait was talking about yesterday.

I know it's crazy, and you may not have the ability to pull it off, but consider this for a moment....cheer for both KU football AND KU basketball. It is an option for people who actually support KU.

Wow!! Another one- year wonder! I wonder if anyone in the KU basketball program sees a trend here given the recent performance of the Jayhawks in the NCAA Tournament?? .

The good news is that once the basketball regular season games start, KU football will be going through another winnable stretch of games! Ending the football season on a high note will help bring football recruits to see our vaunted basketball team for official visits. November will be a good month.

I live in Kansas but not in a region where Time Warner services, nor does espn3. I can usually watch these games on Fox 14 out of Pittsburg but they are telling everyone TWC and Jayhawk TV blacked everyone out. So I guess it's trolling justin.tv and frontrowsports. frontrowsports isn't currently airing the game yet. Hoping to see how we figure out the lack of pg depth tonight. Also whether or not it would be best for Brannen Greene and or Frankamp to take a red shirt. I have a feeling both are going to have issues with latteral quickness especially with the rule changes. A lot of times you can make up for those things with what used to be a legal arm bar. That was a big reason AW3 never played significant minutes last year but you can tell by his twitter account this summer he worked hard to increase his latteral speed.

Joshua Some information to Consider. East coast Big guard play defense with length " Note Michael Jordon". Don't watch his feet watch his hands. AW3 lead KU in steals and scoring in Europe his freshman year, And plus I can always see room for improvement. You are right Left and Latteral quickness makes players Special. Good Luck to the guys tonight and stay Healthy.

Made me cautious, but I'll wait

To anoint this team.

I live in Wichita and have never had a problem watching the pre-season games. After reading these boards, I'm getting a little paranoid. Fellow Wichitans, is there any problems I should know about? I have COX

Cox made a deal with Time Warner to air KU games and other KU programing such as pre game and post game for Cox customers (I am in Wichita as well). The games are either shown on 2022 high def or 22 for analog or on 2122 for high def or 122 analog. These are the Kansas Now stations but when they telecast it will be through Time Warner. If you check your digital television guide on 2022, you will find the game listed at 7 this evening along with pre game and post game programing before and after. Hope this helps, RCJH!

do you know if espn3 will be blacked out for time warner customers,, if not, anyone want to share their log in info

I'm using HotShot VPN (4.95) a month on my Ipad, this will let me watch espn3 games on my ipad... sadly.. my daughter has a school program tonight!!! ggrrrrrr

I have Direct TV and decided to go w/ESPN Full Court, however it doesn't kick in until the 8th of Nov. Anyone know if the game this evening is on Direct?


Just passing along information from the shiver. Not sure if it works, but worth a shot.

thanks, I'll try it