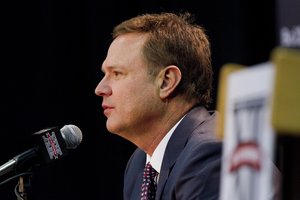 Kansas City, Mo. — The NCAA’s outlawing of handchecking and using one’s forearm to impede an offensive player are new points of emphasis designed to help increase scoring in men’s basketball this season.

Kansas University coach Bill Self acknowledges these changes in the game will likely have that effect, with quality of play a bit sporadic, at least early on in 2013-14, he said Tuesday at Big 12 Media Day in Sprint Center.

“But I think players will adjust, coaches will adjust,” Self continued, noting his players figure to drive the ball a lot this season. “I think over time it will be good. I’m a little concerned early on that, to get to where we need it, it’s going to be some pretty fragmented games.”

Other changes: A foul will be called when a defender places two hands on an opponent. Also, a defensive player cannot move into the path of an offensive player once he starts an upward movement on the block/charge issue.

“It’s really hard for the defense. In the last two weeks we’ve had to really think long and hard about how we’re going to play without fouling, because we’ve worked hard at trying to get fouled,” said Texas coach Rick Barnes. “Drive the ball, put pressure on the rim. It’s going to be really difficult to pick up a charge. So with the defense being there, I wish they’d put the rule in where you cannot go up and take it off the rim.”

Barnes believes scoring will go up.

Tyler hurt: KU walk-on Tyler Self is out three to four weeks with a torn ligament in the top of his foot, Bill Self said. Tyler, a sophomore guard, was injured in Saturday’s scrimmage.

More on OSU flap: Self recently told the Journal-World that Oklahoma State coach Travis Ford’s comment that Andrew Wiggins “is from what I understand, the best player to ever play,” was a “failed attempt to be humorous.”

OSU’s Marcus Smart said: “If he’s the best player, fine. I’m going to go out there. We’re gonna play. He’s got to put his shorts on like me and we’re going to take it one game at a time.”

Self on freshman center Joel Embiid: “I think Joel has a chance to be about as talented a big guy as I’ve ever had. He’s only been playing ball for two years. He’s just starting his third. He’s made a lot of progress in a short amount of time since he’s been with us. If he continues to improve at this rate, he could be a guy that could not only really impact our league, but impact the landscape nationally a little bit.

“He’s young and green and doesn’t really know what he’s doing, but there is obviously a skillset there that few seven-footers have,” Self added, noting when KU first started recruiting Embiid he was the “fourth best player on his AAU team.”

Jewelry: KU junior Naadir Tharpe wore his Big 12 title/NCAA tourney ring to Media Day. “I keep it in my room. When I first got it, I wore it two days. That’s about it. I wore it today, why not? A lot of people (say), ‘Let me see; let me see.’ I don’t mind showing it.”

Tidbits: KU coach Self said Andrew White III has impressed and might be the first guard off the bench. “He’s worked his butt off. He may be the hardest worker we have,” Self said. ... Self said Tharpe is the most improved player since the end of last season. “Perry (Ellis) is much improved also,” Self said ... Self said if a game was to be played right now between last year’s team and this year’s team, last year’s team would definitely win. “By the end of the year, I think this team has a chance to be really good,” he noted. ... Self said frosh Wayne Selden has been “one of our best players since Day One. Period.” He said he probably won’t be a backup point guard early in the season. “Could he do it in time? Absolutely,” Self said. ... KU’s coach said six to 10 NBA scouts have been at nearly every practice. ... Self said KU could play with four guards this year, but he’s more inclined to play his best players, and right now, the big men have been as consistent as anyone. It’s going to be hard to take more than two big men out at a time.

— Jesse Newell contributed to this report

Jesse, will Bill spend more time working on Free throws this year? Or make it more of a point of emphasis now that he anticipates more FT due to the rule change?

Not sure, though I'm sure he could be asked about it today. I would guess not too much more, as free throws have always been important (and also are something that can be improved by player outside of precious practice time).

What I wonder is if the new rule makes Kansas more vulnerable than other teams. Obviously with a crop of freshman who have never played the college game the learning curve is steep, especially defensively. The new rule regarding hand-checking only makes it tougher it seems, and may work against their natural tendencies. Of course a counter-argument can be made that it may in fact be easier for them, because players who played last year will have to retrain themselves, whereas freshman will learn the correct way right out of the gate. It will be interesting to see how that plays out, because Kansas will be playing some good offensive teams early in the season.

Mike, I think you hit the nail on the head. It may be important for Coach Self to extend from the 8 or so guys he plays to more like 10 because of the rule change. At least it's nice to know you have the bench to do it if you need to.

With the new block / charge rule, Mike Krzyewski and Duke are screwed. This has been 60% of their defense for the last 30 years!

Personally I see no way we are going to be able to play man to man defense against a team with quick guards. The way i see the new interpretation of the rule, It will be almost impossible to stop a quick guard from penetration the defense. Zone will be the order of the day to help keep players in the game.I have less problem with the charging rule but again I see zone defense as the necessary defense to keep players in the game. For at least half the season this is going to be HORRIBLE. With team shooting tons of free-throws the games are going to be horribly slow and boring. The NCAA in wanting more scoring has put in place a rule that initially will lead to a lot of 15 foot shots. Guards need to be able to guard. I don't think any of us like the slide under charge calls and this rule change should eliminate most of those. Conner could be the leading scorer in the league if many teams adapt to zone defense. As you can tell I don't like most of the changes because it will slow the games down just when we have a team to speed it up. But only time will tell but in my opinion the last thing basketball needs the ref's making more judgement decisions.

Jesse sometimes NFL teams bring in a ref. to call new rules in a practice so the players get a chance to see how it effects play. Does Bill Self ever do that, would he ever consider that?

They've had refs at the scrimmages. At the very few practices we've been allowed to attend I've seen Self correct players when they do any handchecking. I think Self is convinced there will be a ton of free throws in games this season. Good question above on working on free throws more. We can ask him about that, but my guess is not necessarily during practice but before and after practice, at those times.

I think this is a horrible rule. If you want to watch more scoring, watch the NBA. One of the biggest reasons I LOVE college ball is because there is defense. Not a bunch of people stepping back and letting you shot. What is it about a 90 point game that is so much better than an 80 point game? Would you rather see a guy walk up to the rim for a layup with no one willing to stop him or a guy on him stripping the ball into a fast break for an alley oop dunk? Rather see someone drive the lane for a jam or shot free throws? Whats next? No screens? No blocking? Let em' play!

Yesterday i think it was Curtis Shaw who said college basketball wants to show off the great athleticism and speed of these players. They feel the game was not invented to be as physical as it has become. I heard Shaw mention the rules of basketball more than once.

I actually have to agree with the statement from Gary above: "They feel the game was not invented to be as physical as it has become."

I think the last several years we have seen games devolve almost into slugfests. I think there will always be room for physicality in basketball, but I want to see the athletes play as opposed to having people get beat to a pulp when they try to drive the lane. Go to any gym and play a pick up game where people call their own fouls. If pick up games were played the way the NCAA has played the last few years, there would be fist fights left and right.

I do wonder if the answer is changing the rules like they have done this year or simply enforcing the rules the way they were always meant to be called. I don't know what has happened to Jaybate, but he always lamented Izzo and his smashball attitude. I hope these rule changes also help clean up some of too physical play we have seen from some teams. I think in the past many teams have simply taken the attitude that they are going to foul every time down the court knowing the officials will not call everything. But the simple fact is, if the officials did call everything, those teams would change their approach very quickly.

I know Self loves playing physical, but he also loves teaching "good" basketball. By that I mean quick passing, rotating the ball to the weak side, moving without the ball, etc.. Self also teaches great defense. Moving your feet, hedging, help defense, positioning, etc. Because of the attention Self pays to these things, I think KU will be fine this year. It may take some adjustment time, but I think this rule could help us in the long run.

Also, Curtis Shaw said he will be grading every official on his work in every Big 12 game. If he sees a ref is 17 of 20 correct calls and the three errors are generally on a block/charge or handchecking, he'll educate the ref on the rules regarding the plays he's erring on.