Kansas quarterback Montell Cozart takes a snap against Oklahoma during the second quarter on Saturday, Oct. 19, 2013 at Memorial Stadium. 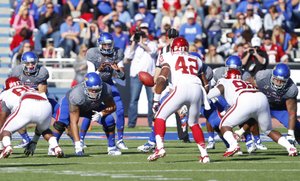 Kansas quarterback Montell Cozart takes a snap against Oklahoma during the second quarter on Saturday, Oct. 19, 2013 at Memorial Stadium.

It might have been a small sample size, but Kansas University football coach Charlie Weis saw enough from true freshman quarterback Montell Cozart during Saturday’s 34-19 home loss to Oklahoma to keep him in the mix the rest of the way.

“You can’t say, ‘Well, let’s go play him for nine snaps against Oklahoma,’ and then sit him,” Weis said Monday on the Big 12 coaches teleconference. “As we go forward, he’ll definitely be in our thoughts. You’ll definitely see him show up in the game (6 p.m. Saturday vs. Baylor).”

Cozart’s playing time last week came as no surprise. Leading up to the game, the 6-foot-2, 189-pound athlete, who last year at this time was calling plays and throwing passes for Bishop Miege High, appeared on the Jayhawks’ depth chart for the first time this season, and Weis said he would not have put him there if he were not a legitimate candidate to play.

Play he did, albeit in limited action. But even though the Jayhawks gained just eight yards and one first down during Cozart’s two drives at quarterback, Weis said the freshman’s time on the field could help him tremendously during the next six games.

“There were a couple of things he could have done a little differently,” Weis said. “But I think the best thing that happened was we got the butterflies out, and he’ll just keep on getting better and better from here.”

Cozart’s teammates, including starting quarterback Jake Heaps, said they were impressed by the young quarterback’s poise in the huddle and at the line of scrimmage.

“He’s a very young buck,” tight end Jimmay Mundine said. “But I think he handled it really well. He wasn’t stuttering or anything in the huddle, and he didn’t seem nervous.... It’s exciting to see him out there excited to play. He has a bright future, and we just gotta keep working.”

In some ways, Heaps’ opinion of Cozart might be what matters most here. And it’s obvious that instead of pouting about Weis and the coaching staff looking elsewhere for an offensive spark, Heaps is ready and willing to play the role of veteran mentor for the first-year Jayhawk.

“At the end of the day, I’m in it to win,” Heaps said. “Whatever we gotta do to win. I’m not too concerned about everything else. All I can concern myself with is what I can do to help my team win.”

Weis said he expected Heaps and Cozart to remain in KU’s offensive plans during the upcoming weeks and added he would continue to be up front with both of them about how they would be used from week to week. Typically, Weis meets with his quarterbacks to discuss the upcoming week’s game plan on Monday nights following his “Hawk Talk” radio show. From the sound of it, both Heaps and Cozart have been regular attendees of that meeting lately.

“We told them (last) Monday we were going to do this,” Weis said of playing Cozart against OU. “This wasn’t just something that materialized on game day. We will visit with those guys after we know what we’re doing (this week), and however it plays out, we’ll tell them exactly what the game plan is.”