KU coach Bill Self address participants in his Ladies Night Out event on Thursday, Oct. 17, 2013, at Allen Fieldhouse. 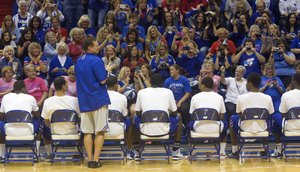 Naadir Tharpe considered it an honor to pose for pictures, sign autographs and demonstrate a few fundamental basketball skills to 450 Ladies Night Out attendees on Thursday night in Allen Fieldhouse.

“It’s really important to me,” Tharpe, Kansas University’s junior point guard from Worcester, Mass., said of the fundraiser for “Jayhawks for A Cure,” with all proceeds going to Lawrence Memorial Hospital and KU Cancer Center.

“My father (Ronald) passed away with lung cancer. Anytime I hear the word cancer, I know it’s a horrible thing. To give back and be able to help everyone, I think is important.”

Tharpe said the attendees at the fourth-annual event had “questions and pictures (on their mind) the whole time. The stuff you are watching now is fake,” he joked of a dribbling drill going on in the background.

“Half of them want to take pictures right now,” he added, laughing.

KU coach Bill Self and the players held a 15-minute question-and-answer session with the women before breaking into stations. Self had to smile at a question he has heard off-and-on, on his radio talk show during his 11-year stint at KU.

That is, “Will you press more this season?”

“This is such a great event. When you all leave, you will know more than your husbands,” he joked, leading into the answer. “We’ve never been a pressing team. We’re a pressure team. No matter what we do, we will not give up our core philosophy. (That is) I hate giving up easy baskets. When you press, you give up easy baskets. Once you get to the NCAA Tournament, teams have such good guards. You don’t really (fullcourt) press then. We’ll pressure more.”

Asked about KU’s string of nine straight Big 12 titles, Self said: “We want to win our league. Really, we do everything we can to try to hang another one of those,” he added of national title banners.

All 18 KU players and the entire coaching staff took part in Ladies Night Out.

“We have many breast cancer survivors here tonight. It (cancer) has touched everybody in some way, shape or form,” Self said. “It’s a great way for us to raise some funds and some awareness.”

Saturday’s scrimmage: Self said it might help his young team to play before a big crowd during Saturday’s open scrimmage (9:45 a.m. to 11 a.m.) in Allen Fieldhouse. Doors open at 9 a.m. Admission is free. About 800 high school and college basketball coaches will be on hand as part of Self’s weekend coaches clinic.

Asked if he wants 16,300 in the building, he said: “If we’re going to open the doors, we might as well fill it up. I hope there’s a great crowd here. I anticipate there will be. I don’t know if we’ll get it full. I anticipate us having a pretty good crowd.”

Noted Tharpe: “It’ll be exciting. I talked to a lot of people around campus. They weren’t able to come to Late Night and were real disappointed. Here’s a second chance. This is what Kansas does. Give people a second chance to come see us before things really get started.”

Okafor, Jones coming to town: Jahlil Okafor, the No. 1-ranked high school senior in the country, and No. 5 Tyus Jones are scheduled to arrive today for official campus visits.

Jones, 6-foot-1 from Apple Valley (Minn.) High, tells Jayhawkslant.com he “grew up a big Kansas fan. Kansas has always been a school that I liked, and Kansas has always been a school that I’ve cheered for, so I think that’s what sticks out to me. Watching the national championship game where Mario Chalmers hit the three to go into overtime, that’s another thing that sticks out to me.”

Jones also is considering Baylor, Duke and Minnesota. He has dropped Kentucky, which has received a commitment from point Tyler Ulis, who is ranked No. 33 in the U.S.

Kentucky is still on the list of Okafor, 6-10 from Chicago Whitney Young. Okafor also likes Duke, KU and Baylor.

Adidas talk questioned: Self on Thursday told FOX sports radio’s Mike North and Bill Reiter that he had a hard time believing a Bleacher Report item that freshman Andrew Wiggins would receive an adidas sneaker endorsement deal ranging from $140 – $180 million over 10 years after his one-and-done season at KU.

“I don’t really know if you should believe everything you hear. I’ve never heard of a situation like what was reported the other day,” Self told the radio hosts. “I’m not saying it’s not accurate, but chances of it being accurate are very slim.”

Turns out Self knows what he’s talking about. The website Sole Collector on Thursday said that “offer” is a hoax.

“There is a fraudulent letter that claims to be from our company offering Mr. Wiggins a contract. Any reasonable review of the letter would determine its lack of credibility,” an adidas spokesperson told Sole Collector as reported in a story by Sole Collector and collegebasketballtalk.nbcsports.com. ”Beyond this, we do not comment on rumors or speculation about potential partnerships.”

Sole Collector’s Nick DePaula speculates Wiggins might expect more like a $6- to 8-million deal over seven years upon leaving KU.

For the Sole Collector story on the hoax, go to http://bit.ly/18pRIGC

I hereby call on everyone to BOYCOTT this site. Let us stop posting here on all articles. The Bleacher Report has a post reply that is not linked with FB. I intend on frequenting that blog more often. Who is with me?
I realize this will take time to organize, it wont happen overnight like the stupidly rediculous FB linkup, but this absolutely should happen.

EVERRYONE GO TO ROCKCHALKBLOG.COM ITS JUST LIKE THIS EXCEPT NOT LINKED TO FACEBOOK, ITS NOT POPULAR BUT IT REALLY NICE!

Well, I set up a bball forum if anyone who couldn't set up an account via facebook needs a place to chat. It's here: www.kubuckets.com. There's not much to it yet, but its warm and its dry, and it should make it through the winter.

I am often on basketballforum.com the past 11 years

Should be okay now, I had to fix something in configurations earlier.. Let me know if you still have problems. Feel free to email me or msg me here, those would be the quickest ways!

Well I've found my way back to the site. Quite a deal. I'd never done facebook and didn't read the requirements of a real name, and tried to use Hem Jayhawk .. much like Ralster tried to do yesterday. Then got locked up, and a very nice lady named Alma at the LJW helped me get unlocked.

What was interesting was that I was posting for a few days under Hem Jayhawk, but never got a reply or response .. it only showed up to me. I looked on my wife's computer. My posts weren't there, but were there on my computer. Interesting.

The truth is in the middle on this one. Kusports.com is enacting a bunch of changes that aren't popular. The surveys before articles, the required connection to facebook, removal of fan blogs, etc. For all its miscues, however, it remains the best site for news and comment on Jayhawk sports. It is by far the most interactive in terms of authors being responsive to their readers. News is in-depth and timely, and their live-coverage of events can not be found anywhere else. Ive been on this site for a number of years, and the biggest regret I have--much more than these recent changes--is the retirement/exit of Bill Mayer. That may be neither here nor there for most of you, but it's interesting that he too dealt with an onslaught of mutinous fans, despite the fact that he provided a longitudinal perspective that gave beautiful context to the history and tradition of KU, but which is no more. Oldgray if you're out there, I hope you don't mind my sharing a snippet of an email you sent me shortly after the national championship game in '08:

"I want you to know I appreciate the support you have expressed for my work over a period of time and your observations and commitment to the KU scene are right up my alley.

You make an old man feel good and you're a pleasant contrast to some...As Phog Allen said, if the carrier stops to kick at every barking dog he never gets the paper delivered.

I love KU, and can't help but love the site here. All things considered, it's enriched the fanhood of most every visitor.

In all actuality, other than the superb statistical analysis from Jesse, and Nick's outstanding photographs, this kusports.com page is actually worthless when it comes to bringing insightful news stories and periodicals. Oftentimes, the stories here follow up on a deeply invested poster/board rat comment from the prior days threads. You see it all of the time; a poster brings a link, then LJW has a story.

The diatribes, dialogues, summaries, prognostications and game reviews by the board rats and posters are often far superior to the actual columnists' piece. I'm not being hateful, I'm just giving honest feedback. Being journalists, you should expect this.

This was a place I could come to entertain myself, learn about basketball, and grow in my Jayhawk fandom, and sometimes, take a valuable piece of information and apply it to my daily life. Thanks to Oakville, Jaybate, HEM, Ralster, Dynomite, Slayr, Konkey, Tx10, among many many others whose names escape me at this moment. What you have brought to this board. Most of us know that the hundreds of comment and "site link hits" are attributed to you guys, and not the authors of the articles and less than stellar headlines.

And another one bites the dust. Ron, I absolutely could not agree with you. KU fans conversed in an absolutely indepth fashion on here sometimes and it was extremely intertaining and special. I miss those days already. Now everyone is gone. Even if it changed back I doubt anyone would come back. I will now barely ever come to this site like a lot of people, considering now I can just read these stories in the paper. I'm out as well.

This is actually my first time posting on here. There is nothing I love more than to sit down with a cup of coffee in the morning to read the posts/comments from all the Jayhawk faithful out there. Damn shame the LJW made us lose the likes of Jaybate, HEM and Dragonslayr….I know the Facebook thing sucks but we need to find a way to get these guys back. If you guys are out there we miss the insight.