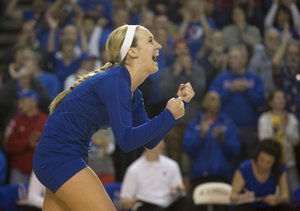 Caroline Jarmoc needed an extra piece of equipment to go with her knee pads on Saturday in Horejsi Center.

She had a handkerchief at her disposal during Kansas University’s emotional 3-0 Senior Day rout of Texas Tech. The volleyball match was contested before a crowd of 1,300 that included a batch of relatives and friends of the Jayhawks’ seven-woman senior class.

“I’ve got something in both my eyes,” fifth-year senior Jarmoc said with a smile before meeting the media after the final home matches for Jarmoc, Catherine Carmichael, Erin McNorton, Jaime Mathieu, Brianne Riley and twins Amy and Kara Wehrs.

Those were tears in the eyes of All-America middle blocker Jarmoc, whose dad, Jacek, and mom, Zofia, made the trip from Calgary, Alberta, to attend the match, which included pregame introduction of players and their parents and postmatch speeches of the seniors.

“It’s my dad’s first time in Lawrence in five years. He finally got to see my apartment and all the facilities and everything about Lawrence I love so much,” Jarmoc said.

KU officials provided the ultimate honor for Jarmoc and her parents. A Canadian flag was hung in Horejsi, and the Canadian national anthem played before “The Star-Spangled Banner” preceding the first serve.

“It was awesome to hear. I’m far away from home. It was really nice that they showed their appreciation for me and were showing respect for my country, which was really awesome to see,” Jarmoc said.

Regarding the anthem ... she recalled first putting the idea in KU coach Ray Bechard’s head.

“I was sassing them (coaches). When the Italian team came in, they put up the Italian flag, and I was, ‘What is this?’” Jarmoc said with a smile. “Everybody was pointing it out to me today. It was really awesome.”

She had seven kills, giving her 1,275, which ranks fifth on KU’s all-time list. Her two blocks upped her KU career-record total to 540, tops in school history.

“We’ve become a great class. We are super close,” Jarmoc said of the seven-woman group that has emerged the past two seasons, rolling to a 48-13 record.

“We’re kind of the class that helped turn this program around. It’s definitely emotional and very sentimental.”

“It shocked everyone. It was me at the beginning,” Dallas native McNorton said, when asked which player was most emotional. “At the end, I think ‘Bri’ (Riley) and Jarmoc got that award for sure.”

“It was interesting a freshman would step up and take some big swings on Senior Day. I’m so proud of all seven of those kids, all they’ve done for this program,” Bechard said after his team improved to 22-6 overall and 12-3 in the Big 12. Tech fell to 9-22, 2-13.

“We just talked in the locker room about how it’s been a very successful ride. How can we make it significant? How can we get better next week, hopefully with the postseason and hopefully take it a little bit farther than we’ve ever gone before?”

Next, KU will meet Denver in a special Thanksgiving-week match at 6:30 p.m. Tuesday in KU’s Allen Fieldhouse. Admission is free. KU is hoping to host a match or two in the fieldhouse for the second straight postseason.

Congratulations to you all for for all such a marvelous season ~ coaches and players. And especially for the Seniors ~ through your dedication and effort, which has resulted in such success these past two seasons, you have established a legacy for The University of Kansas Women's Volleyball program ~ and legacies carry an ongoing impact. Caroline ~ I am so pleased that your parents were able to share this special day with you ~ the Canadian National Anthem and flag was a wonderful addition. And, 'Bri' and Caroline ~ I also could use that "special piece of equipment" myself.