It’s made inquiring minds wonder about the 6-foot-8 freshman’s motivation for sitting in the barber chair prior to such a big game.

“Maybe all of the above,” KU coach Bill Self joked Wednesday on his Hawk Talk radio show when asked if Wiggins shed his hair because (A) it was such a big game, (B) the coach suggested it or (C) Wiggins’ mom suggested it.

“He looks good,” Self added of Wiggins, who erupted for 22 points including four big ones down the stretch of KU’s 94-83 victory over the Blue Devils at the United Center in Chicago.

“I think it’s fine either way. He’s always thought he looks like he is really, really young with his hair cut. With his hair, he thought he looked at least six, eight months older. So that’s the reason he wanted to grow his hair out, because it makes him look older.”

“I (initially) told him I think he should keep his hair, with the thinking he’ll never do what the coach wants him to do, so he’d want to cut it,” Self stated. “Maybe I shouldn’t have told him that, because he said, ‘OK, coach, if you think I need to keep it.’

Self said when Wiggins arrived for a team meal with short hair ... “I’m serious. I didn’t recognize him at all. I said, ‘Who is that? That’s a good-looking kid.’

‘“That’s Andrew,’” Self was told. “Since he played pretty well, especially down the stretch, I think he’s probably OK with it.”

Wiggins hit a step-back jumper that stretched KU’s lead to 85-81 with 1:30 left in the thriller vs. Duke. After a Perry Ellis steal and pitch ahead, Wiggins downed a dunk 14 seconds later to make it 87-81.

“That right there kind of showed a lot of what Andrew is made of,” Self said. “The shot he made was a hard shot, but it is his shot. Perry made the play definitely. Andrew had a great finish and Jabari (Parker) had his fifth foul.

“The thing I like the most,” Self went on, “is the excitement level of our kids after he (Wiggins) made the play (dunk). Those kids had fun last night. Sometimes when you are young and don’t really know anything, you put yourself in a situation you act cool or act like the stage isn’t too big. The kids did that a little bit, but when the game was on the line, there were some happy kids out there playing. It was fun to watch. I love to see them play with more of their personality each and every game as opposed to being this stoic-type figure. I thought it was good they showed that.”

Late to bed, early to rise: KU’s players didn’t get to sleep until between 5 and 5:30 a.m., Wednesday. The return charter flight from Chicago was airborne two hours after scheduled departure time.

“There was some kind of communication error between our bus and TSA (Transportation Security Administration) officials and so we got to the airport (from United Center) and one of the buses had to return to the arena,” said KU associate AD Jim Marchiony. “Everybody had to get re-screened. I don’t know all the details. We had gotten screened at the arena before we got on the bus. It’s why we had to go back. The TSA official was at the arena. We got re-screened and the TSA official went back with us to the airport. We got on the bus and took off a little before 3.”

“Everything is good. It was a short night as everybody on our trip found out how important TSA is at the airport,” Self said of the travel delays on Hawk Talk.

They came mainly to see freshmen.

Kentucky freshman Julius Randle had 27 points off 9-of-14 shooting (9 of 15 free throws) with 13 rebounds and eight turnovers in UK’s loss.

“I talked to several NBA guys today,” Self said Wednesday. “I didn’t see much of the first game. The second game was a great game. I didn’t think it was the most artistic. They (NBA scouts) were raving of the quality of the players and the games this early in the season. It made me feel pretty good, because I know our guys stuck it out and performed pretty well. We haven’t been performing consistently great at all. We did get excited to play. It will be a teaching moment to know if we are geeked up and energized what this team can potentially do if everybody is on the same page. It was a great starting point.”

KU will next meet Iona at 7 p.m., Tuesday, in Allen Fieldhouse.

I say we christen Andrew as 'Gins. That's Wiggins without the Wig!

I say we call him Ender, as in Andrew 'Ender' Wiggin. Because this kid is a stone cold killer and knows how to end games.

That is possibly the worst nickname ever.

I know you didnt come up with, as I have seen it many other places.

But c'mon. Be a little more creative please.

The name Ender Wiggins comes from the movie Enders game, the main character in the movie is named Ender Wiggins. Ender Wiggins was a weak scrawny white kid, hardly a name I would want Wiggy to have. Even if that movie was better, I don’t think it would be a good nickname.

Thanks for the info.

It still is a horrid nickname to give to someone.

You're mostly right. But Ender's name in the book/movie actually was Andrew Wiggin, and he was known as Ender.

The nickname Ender was symbolic because the child/military recruit was believed to be prodigy who would end a war with an alien race. He frequently was picked on because other recruits were envious of the special treatment he was given due to his prodigy status. When picked on he would fight back with lethal force because the first battle is self defense, but the ultimate goal is to scare others away from picking fights with him ever again, or to prevent future attacks.

Like Ender Wiggin, Andrew Wiggins is a prodigy and we all believe that he can take us to a national championship and land us future top ranked recruits. I think that Ender is a sweet nickname for the fictional character in the book. I'll try not to spoil the movie for anyone, but although there does seem to be reason to call Wiggins 'Ender' (some more obvious than others), I doubt that he would prefer that nickname and after the stage is set in the comparisons of Andrew and Ender, then the stories diverge. Let's let Andrew's nickname develop on it's own.

If they don't screw up and make you have to do it all over again...

I cannot wait to play Bruce "Cry Baby" Weber. It should be a real laugher.

Not as bad of a laffer as playing Northern Colo. in your home opener, and losing...!

I was hoping that Wiggins was going to grow his hair to look like Don King.

I can't believe that we are talking about a haircut.

But I think he looks better with it cut. However, I find it hard to believe that we couldn't find a better picture of him from Tuesday night than the one below the headline on this page...

After watching Kansas' "Big Men" shread Duke Tuesday night on National TV...I am baffled that big men aren't lining up at the door to play for Bill Self and Kansas.

Anybody remember Tarc? I never put much stock into recruiting anymore until the kids actually commit and say it themselves (Unless you are Terrence Jones of course), but I will say that it would be disappointing if KU missed out on Okafor, Alexander, and Turner. That would not make sense to me. Jones is Jones and one hell of a PG, but I'll be honest...I'm content with Tharpe and Mason.

Don't worry about looking too young Andrew. Sometimes it's not the haircut that belies age, it's the lifestyle. 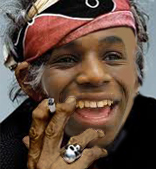 See Keith Richards for how to look older . . .

I miss Jaybate. And Jesse.