Coach K: It’s not about freshmen 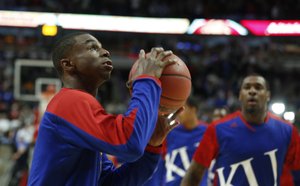 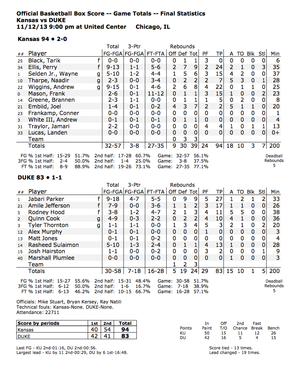 Chicago — Jabari Parker scored 27 points and grabbed nine rebounds for Duke in 33 minutes. On the opposite side, Andrew Wiggins went for 22 points and eight boards for Kansas University in 25 minutes.

Without a doubt, Dick Vitale’s diaper dandies had exceptional performances with ESPN’s Hall of Fame announcer in the house. Those performances were secondary in the big picture, according to Blue Devil coach Mike Krzyzewski.

“This wasn’t about those two kids. It was about Duke against Kansas,” Krzyzewski said after the Jayhawks’ 94-83 victory at the United Center in coach K’s hometown. “A lot of kids played well tonight.”

Of the 6-8 Chicago Simeon High graduate Parker, Krzyzewski said: “Two games in, he’s been sensational. Jabari did a great job. I like my guys. They are playing their butts off. We’re not going to make any trades.”

Notes: Former Duke players Carlos Boozer and Grant Hill attended as did former KU player Kirk Hinrich. ... KU is now 3-7 all-time against Duke. Self is 1-1 as KU coach versus the Devils.

KU and Duke should play every year. I guess if the Champions Classic continues they will play every three years, but I would like for us to have an annual intersectional rivalry with another elite program. UNC is out. UK plays UNC every year. Duke would be perfect.

Like the idea of playing another blue blood every year.

Agree...Carolina doesn't get the priveledge of playing us.

Dukes been good since Coach K. UCLA would be the better 4th.

Better in what way? Since Wooden/Gilbert, UCLA has been at par with Jayhawks only about 1/3 of the time. Before K, Duke was at least relevant. The best four conferences are represented in the Champions' Classic.

I love KU and hate Dook... But unfortunately Gary its the other way around.. KU is 3-7 vs Dook

If you added 2 more teams to the Classic, it would make the event unwieldly for television. Already saw how long things went yesterday for both games. It's great to be a part of it. UNC, OSU, and other teams will have their marquis matchups and tourneys as well; I would venture a few of those elites would play in teh preseason NIT whereas we might not so long as we're participating in the CC.

Judging by the amount of minutes played Parker scored .82 points a minute and Wiggins scored .89, nearly a point a minute. If he would have played 33 minutes and continued at the same rate he would have scored 29 points. It's not just about the total amount of points you score but how effective you are with the time you play. Great game Hawks! Now let's build on that win and prepare for the rest of our difficult schedule.

Great point, John...I noticed that Wiggins made-buckets/attempts was MORE efficient than Parker slightly. Which is just a statistical point...I personally also thought Jabari Parker was incredible...and truly could be the 'next' Lebron, since at age 18/19 he is 6'8 and 235lbs; surely by age 22 he could gain the 15lbs to be 250+ like LBJ...