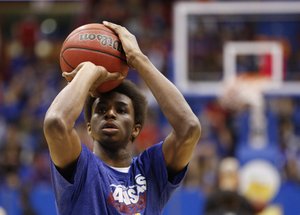 Nice classy comments by FHSU coach and players...they came to play, and played well...I hope they have a good season and win their league. In the meantime, Self is busy grilling frosh buns right about now regarding defensive intensity, and the consistency thereof.

Nice, classy game played by the preseason MIAA favorites. These could be two of the teams still playing in late March (in different venues).

I still have Harold Randall's 1938 letter sweater with the gold K on the chest. He was a co-captain of the last undefeated FHSTC football team the year they beat the Big6 champions (from Manhattan) in a 3-0 game on brand new Lewis Field, ankle deep in the muddy sod he and Rudy Skuball had laid that summer (and again the next).

History and tradition exist wherever you look deep enough to find them.

I couldnt figure out if we werent playing well or Fort Hays was playing really good. I dont know if I should be mad we let them put up 75 or be happy for them This team is stressing me out and the new foul rule is killing me.