Back when Elvis Presley released “Heartbreak Hotel,” Monte Johnson was in the same class as Wilt Chamberlain. The same Kansas University freshman class, that is, not the same class as a basketball player. Twenty-nine years after that, Johnson was KU’s athletic director when Danny Manning decided to come to Kansas to play basketball and earn a degree. Twenty-nine years after that, Johnson reacted Tuesday the same way most Lawrence residents did at the news that the nation’s best high school basketball player will have ‘KANSAS’ spread across his chest throughout next winter. He broke out into a huge smile that stayed with him all day.

Sure, Rivals had Josh Selby ranked No. 1 a few years ago, but Selby just happened to be the last No. 1 in a year there wasn’t a clear-cut top recruit. There were nearly as many No. 1-ranked prospects as there were recruiting services. This is different. The moment Wiggins reclassified from a Class of 2014 recruit to 2013 he shot to the top of a very talented class. He’s been called the best high school recruit since, take your pick: Kevin Durant, Greg Oden, LeBron James.

Wilt, Danny and Wiggins can’t be compared as basketball players because of their different styles and positions and because nobody can be compared to Wilt. But Johnson did point to traits shared by Chamberlain and Manning and to early signs that Wiggins might have them as well: class and humility.

Wiggins didn’t invite ESPN in for a news conference choreographed by the network, replete with baseball caps from all four schools facing the TV cameras. Great sign.

“It tells me a lot about him,” Johnson said. “He wasn’t doing it for the glory or for the attention the way most of them do it.”

Instead, he let a reporter who had covered him in high school break the news via Twitter.

“That’s very telling about what type of person he is,” Johnson said.

Throughout his recruitment, Wiggins appeared to think all the speculation about his college choice, all the importance placed on it, did not make sense. He seems to get that just because he happens to be really good at something that generates huge audiences on TV and in person doesn’t make him more important than heads of state.

Manning’s the same way and, according to Johnson, so was Wilt, who to that point was the most talented basketball player ever. (A compelling argument still could be made that nobody has knocked the Babe Ruth of basketball off that perch.) 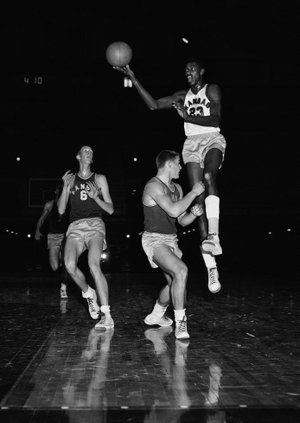 In this file photo from Dec. 5, 1955, Kansas University freshman Wilt Chamberlain (23) scores a goal during a freshman intrasquad game. At left is freshman Monte Johnson (6).

“We all heard talk about this 7-footer from Philadelphia, but we had no way of seeing him play,” Johnson said. “It’s not like you could watch highlight clips then. It wasn’t until I saw him our first freshman practice that I was able to appreciate and understand what they were talking about.”

All these years later, Johnson still sounded in awe of what he saw that first practice.

“I was thinking, ‘Where in the hell did this guy get these skills? He could jump out of the gym, run like a deer,” Johnson said. “He did things I had never seen before, did them with unbelievable grace, unbelievable coordination. I thought, ‘Boy, am I lucky to get on the same team with him.’”

You make your own breaks in life. Johnson made his first big one by scoring 27 points for Wyandotte High in a home game against Shawnee Mission North. A relative of Phog Allen’s happened to be in the stands. He let the coach know what he saw and KU assistant coach Dick Harp contacted him to arrange a home visit.

“That was a little uncomfortable for me,” Johnson said. “We were so poor I thought they maybe they were coming to the house to figure out how to buy us some food.”

Johnson hired Larry Brown, who in turn hired Ed Manning as an assistant, and Danny and the Miracles delivered a national title to Kansas in 1988.

Now Johnson will enjoy KU’s third great recruit along with 16,299 from a seat alongside his wife, Kay, at center-court, halfway up, backs on their chairs. A gift from the school for his service as athletic director? Not quite. It doesn’t work that way. He made some nice investments in businesses that deal in that bubblin’ crude that comes up through the ground, oil, that is, black gold, Kansas tea.