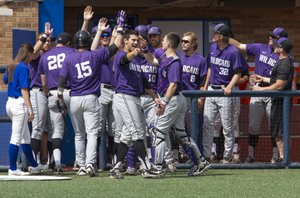 unless we advance to the finals of the Big 12 tourney, or actually qualify for the NCAAs....this weekend qualifies to get the coach fired. you can't beat your bitter in state rival one game at home? when was the last time KSU swept us in Lawrence? i don't remember it happening anytime recently....i'm surprised the LJW didn't report that.

We have not beat K-State in baseball at home since 2009. The schedule back then was a 3 game series, 2 at home and 1 away and the home team for the series got both home games. K-State swept us at home in 2011 also. But there it is, the last victory against K-State at Hoglund Ballpark was in the 2009 season.

We win the series from all 4 Texas schools in the Big 12, yet get swept by KSU and WVU. What looked like a promising season has now morphed into the same old same old. Price's tenure has been disappointing to say the least. Our offense has to be the worst in the league.

totally agree. KSU has made three straight NCAAs....(this year will be #4) and we can't crack it once?

there are no more excuses....it's probably time for a change. KSU hired a a highly successful Div II coach to head their program...there has to be a similar guy out there for us....either DII or a middle tier DI program. We have to get coaches committed to excellence for the University of Kansas.. ...period. :)

If KSU wins the Big 12 Championship, and they probably will, they will have won three conference championships this year (football, basketball and baseball). I wonder when the last time a team accomplished that?

It was disappointing, but the team took a big step forward. The KSU fans will be trolling quite heavily if the end up winning.

This is how you defeat it, "Try going to a Bowl and winning it, going to the Final Four, and the College World Series in the same academic year". Kansas has done it.

HAHAHA! "this is how you defeat it". Try winning a game. It's 2013, stop living in the past. ku is losing whatever clout it thought it had. Maybe you guys will win a football game this year....maybe....

Lack of a division title in football that year always waters that down.

What frosts my cheeks is the silence about the solid, scrapy play of these kids on this post when they where winning series. Yet, get swept by the conference leaders and suddenly it's the coach?

Impressive, but not as impressive as a national title. Still the only team in the conference without an NT in any sport. MEOW.

KU is really only good in one sport, men's basketball. K-State will be conference champs in football, basketball and baseball. The billboards on I70 will be going up soon.

Maybe baseball will be the sport where you actually win a post season game. MEOW.

Maybe this is the year ku will win a conference football game....maybe

Maybe this is the year you finally finish that degree in animal husbandry. Then you can get a real job and stop trolling.