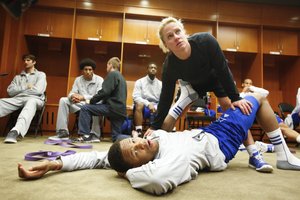 Coach Roy got his 700 jersey, I wonder what KU's got for coach Self. Hope it's something different & cooler. Early congrats to coach Self!

Much has been and will be made of two tradition-rich programs meeting today, but a program's reputation is earned the hard way: one game at a time. It sounds like the players are aware of what's at stake and the appropriate mindset with which to approach the game. The Roy Williams vs. Kansas hype and the 300-game milestone are complete non-issues. The fact is, it really doesn't matter who we play in terms of focus. Kansas needs to key in on certain objectives: control the boards, play perimeter defense, set good screens, pound the ball to the post where we have the advantage, and reduce turnovers. Oh yeah, and Ben McLemore needs to get much more involved.

I love Roy Williams, but not today. He is just another coach of a different team that Kansas needs to chop the head off of. It's not personal, it's just business.

Rock Chalk and let's get this done.

Bulletin board material: Wichita State, a #9 seed, defeated a #1. Carolina is an 8 seed...

Bulletin board material for who??

Bulletin board material is when the other team talks trash. I don't think KU cares what WSU did.

Bulletin board material is anything pregame that motivates a team to play their best. This includes, but is not limited to, trash-talking by the other team.

IMHO Carolina is seeded a bit low this time. They are better than an average 8 seed. Alternately, Gonzaga wasn't ready for the Shockers and we will be ready for UNC. Kansas represent!

Carolina starts five McD's AA's and is an 8 seed in an off year. Wow.

A players meeting? Those always work.

Good to have a meeting.......But hope they are not too worried about Friday's game. They won.....that's all that matters.....and they need to focus on that.

Still beating that same drum huh? The "we won so who cares" beat?

Apparently some of us fans weren't the only ones who thought their performance on Friday was bothersome. That they have cause for concern that despite winning that poor performance could snowball into another, just like it did during their conference season funk.

So you have Self saying in the post-game that he wasn't pleased, players only meetings...but what do they know? I'm sure it was all according to plan.

So, sitting around for 36 hours or more while every other team in the tournament played didn't weigh heavily on the team. Anticipation only lasts so long, and I'm betting it ran out about the time the guys entered the locker room.

Limit the stupid turnovers and we win and go deep in the tourney.

We also have to make some shots..

Score more points than our opponent we will win every game.

I think the possibility of being the first 1 to lose to a 16 was looming over them Friday night. They'll be more lose and I look forward to them returning to form today and continuing.

Playing UNC will be playing to win not playing to lose like they did vs WKU. Completely different ball game.

Johnson says " be aggressive and have fun" . That is true, but let us not forget to concentrate and take care of that ball. Stupid turnovers are just that, stupid. And they don't go away by laughing them off. Take care of the ball like your life depended on it. I would like to see Johnson get a little pissed off when he turns the ball over and get pissed of at himself. I know you need to play loose, that does not mean playing carelessly.

They certainly needed to have a team meeting. Watching all the games and seeing the players leave it all out there is the message here. Battle, like Marquette and Butler. Play to win like FGCU. Handle the pressure like Michigan. These Jayhawks have lessons to learn before it's too late.

About time to cheer on Iowa State. Go 'Clones!

“Be aggressive, have fun, not be uptight,” Johnson said.“Getting off to a good start. That starts in the morning when we wake up, having fun. You’ve just got to relax. It can be tough if you make it tough. Last night we made it tough.” Elijah is a good talker, he needs to walk the walk and MAN UP or SHUT UP!!! 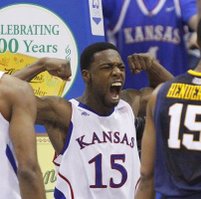