Visinia took an unofficial visit to KU on Wednesday and committed at the end of his trip, according to Rivals.com.

"It was love at first sight," Visinia told JayhawkSlant.com's Jon Kirby. "I loved being around the coaching staff and I knew Kansas was the right place for me and I committed."

Though Visinia had received interest from other schools, KU was the first to offer him a scholarship. The senior-to-be, who is currently unranked by Rivals, is KU's sixth commitment for the class of 2014.

Jeeeeezus! That kid's a hoss. He's gonna have to drop some of that weight though...

Not ranked by rivals? Ain't nobody got time for that!

He still has his senior season to play. And I think I trust Coach Weis's opinion on recruiting a little more than Rivals -- or yours, for that matter (no offense).

Lots of players still getting ranked. Dineen went from NR a couple weeks ago to 77. The most elite are done, but plenty of quality players still NR (~Maloney). Size and speed can't be taught.

If you're not from Texas, Rivals is not interested.

I know someone familiar with him, whose opinion I respect when it comes to evaluating talent, and he thinks the kid has NFL potential. Apparently he's very coachable. He just needs someone to push him in the weight room. Apparently he's pretty mobile for his size.

Keep in mind he comes from a school that doesn't do a very good job of promoting their atheletes with the media, the school that produced Alec Burks (who local D1 coaches were not even aware of) and the school that has maybe the most underrated point guard prospect in the country, Tyrone Taylor, who has offers from virtually every mid major power program in the country (in other words, the schools that are good at identifying talent the big boys and rating services have missed.)

Try this on for size. 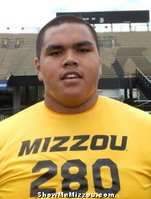 Son, grab a red shirt and get to work!

Coach Weis is really following his stated strategy of trying hard to get the players close in. Wouldn't be a bit surprised to see this guy as a two year starter after time in the weight and training program at KU.

Where linemen are concerned wouldn't be a bit surprised to learn that that our former pro-center coach has a lot of input into their evaluation.

This kid definitely falls under the category of "full growd".

ESPN has him at 6-3, 396. Guessing that Rivals is updated, and shows movement in the right direction.

If he doesn't even merit a star, why would we be excited?

And who are the other schools interested? UMKC? Wichita State? Southwest Eastern North Missouri College? University of Phoenix Online?

He's a 2-star recruit on Rivals. I've seen plenty of 3-star players that aren't ranked. It's also early in the recruiting process, so there's time for him to move up.

Iowa, Missouri and Nebraska were the other schools listed as being "on his radar."

I think in the headline you meant to use the world "verbally"...

At the risk of incurring the scorn of English majors, I'll throw out my opinion on this burning issue. Although current convention is to use "verbal" in this situation, I believe there is nothing wrong with using "oral", and it may be a slightly more proper word to use in describing this type of agreement. "Verbal" applies to things that are put into words, whether written or spoken, while "Oral" applies only to spoken words.

Rivals has him as a 2 star. Other teams listed were Iowa, Nebraska and Don't-MissU.

Journalism style books insist on "oral" so - although you apparently havent noticed this before - you have not ever seen "verbal" in the LJW in this context.

Missouri trolls on the KC Star are down playing this kid as being worthless and that he was only recruited by KU and Missouri St. MU , Iowa, Neb & KST was interested in this kid also. Great recruit for KU. This kid will be considered by the end of this year as high as a 4 star. Welcome to Kansas Apa.