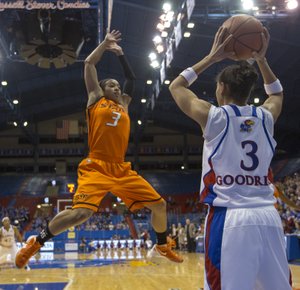 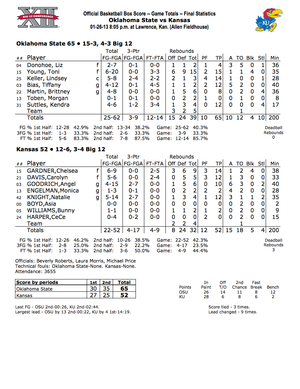 The nice thing about veteran teams at any level of basketball is that they exhibit sound fundamentals, except when they don’t, that is.

Kansas University’s women start three seniors who are members of the 1,000-point career scoring club and two sophomores who started three NCAA Tournament games a year ago. Mix in a home-court advantage, and what do you get?

Well, for starters, 18 turnovers by Kansas and in the second half 13 offensive rebounds for Oklahoma State, which muscled its way to a 65-52 victory that sent a crowd of 3,655 fans in Allen Fieldhouse home with heads hanging low.

“No excuse for 18 turnovers against a 2-3 zone,” Kansas coach Bonnie Henrickson said. “Just no excuse for that.”

Seven of the eight players who appeared for Kansas had multiple turnovers.

It worked. The Cowgirls (15-3 overall, 4-3 in the Big 12) had three more offensive rebounds in the second half than Kansas (12-6, 3-4) had defensive boards, a disparity that should never take place if the team playing defense is bringing enough passion.

“I think we were slacking on the boards on defense, and we didn’t box out like we should,” said sophomore Chelsea Gardner, who led Kansas with 14 points, nine rebounds and four blocked shots.

Senior center Carolyn Davis chipped in with 12 points and five rebounds and took just six shots from the field and had three turnovers.

On the perimeter, senior point guard Angel Goodrich, hounded tightly by Cowgirls point guard Tiffany Bias, made just four of 15 shots, but did defend Bias (4-for-12) well and totaled 10 points, six rebounds, six assists and two steals on a night she had three turnovers.

During a Kansas second-half drought that lasted 5:55, the visitors pushed their lead from two points to nine, and KU never drew closer than seven for the rest of the night. Some in the crowd, no doubt, wondered during that dry spell if things might have been different had Keena Mays not left at the end of the first semester last season. Mays transferred to SMU and became eligible at the start of the spring semester. She is averaging 21.2 points and making 46 percent of her three-point shots.

Last March, even without the injured Davis and without Mays’ explosive scoring, the Jayhawks brought national attention to the program with a spirited, Goodrich-driven run to the Sweet 16 of the NCAA Tournament. That was just 10 months ago, but Saturday night it seemed like longer ago than that.

“No excuse for 18 turnovers against a 2-3 zone,” Kansas coach Bonnie Henrickson said. “Just no excuse for that.” I can think of ONE good one and it rhythms with "roaching"

Would that be Coaching? lol First mistake was in bringing back a coach that never made and impact in your first 7 or so years at KU.

My, My, My !!! Why the mention of Keena Mays now? When KU was winning, no mention of her and what she could have brough to the team. The truth of the matter is that no matter if Keena had stayed, her game would not have blossemed to the level that it has at SMU. At SMU, I am sure she is able to play without looking over her shoulders play after play. Keena should have been in the starting rotation long before Natalie and Monica. Had she stayed at KU, it would not have made a difference in the outcome of games because HCBH would have played her sparingly for the sake of trying to make Natalie into a star, when she clearly cannot carry a team. HCBH would not have let her and Angel share the spotlight either, just as it is hard for her to allow Chelsea over Carolyn. KU teams under HCBH have not been successful (except for the Sweet Sixteen Run) because she is not willing to make any changes, whether halftime or the start of the game. Monica and Natalie IMO need to be sat down and a few changes need to be made. Give Asia Boyd a chance and also allow CeCe to do what she is capable of doing(What we all saw in the Baylor game). It seems as though she is the strongest guard to be able to penetrate in the lane. There was no penetration whatsoever last night during the OK State game. It is not like KU has never seen a 2-3 Zone before. Looks as if Angel is getting frustrated, as she should be. The guards that are consistently on her left and right (Monica and Natalie) are just not what we need. Yes Natalie scored X amount of points in this game, but what has she done the past few games? HCBH has given her and Monica chance after chance and if this continues, we will surely not need a viewing party to see our name on the selection board for March Madness, we should just prepare for our acceptance into the WNIT. I am so frustrated watching this kind of play, especially with other guards just sitting there rotting on the bench. KU fails to get transition buckets, which they used to do so often. Guess being a hometown girl helps, as there is no way Natalie deserves 30+ minutes a game, her or Monica. Not turning the ball over is attritutable to her just passing the ball to Angel and putting Angel in crunches. Think about that, and try to figure out why Mays left and what a season with her could have been. Looking back on things, that is probably the same type of games I had to watch when Danielle and Sade were here and no one else was allowed to play their game. It takes 5 on the court to pull a game off, and it always seems that this coach only wants 2 or so to playmake and that has and is killing the team and its momentum moving forward. Frustrating, just Frustrating!!!! Anyway, glad to see that Keena is doing so well, as I make a point to keep up with her and the other ladies that departed the program. Don't be suprised if Donielle Breaux makes a signature statement when we play TCU.

Diara Moore is not slouching in the SEC either, averaging nearly 13 points per game.

This is the usual Bonnie Ball. Play well prior to Big 12 then bomb out. Nothing has changed and apparently Zenger is satisfied with mediocrity.

Look at who torched the women Jayhawks. A girl from Andover, Kansas and a girl from Maize, Kansas. KU does not recruit Kansas. I can't think of the last impact player that she got from the state. They go to K-State if they stay in the state.

I believe KU try to recruit from Kansas. The athletes are just smart enough to choose a better program then what is offered at KU. They know the history of WBB since HCBH been there first hand. What Natalie as done in the past two years KU was probably her best option.

Articles about Natalie have stated that she always wanted to go to kansas; it was a family tradition and she is a fantastic player. Look at DeShawn Harden ; she committed to Kansas, then went to OU, and now she is playing for Johnson County. So its not just athletes leaving KU.

Too bad for the ladies and the fans, as they/we deserve so much more.

mom_of_three, it is obvious that you do not know much about bball. lol Natalie MAYBE good but fantastic NOT! Let me give you some names of FANTASTIC players: Dawn Staley, Diana Taurasi, Sheryl Swoopes, Candice Parker etc...they made a difference in the game. Those are FANTASTIC players.

I agree with you Athletes leave programs all over the Country every year. MAJORITY leave (at the end of season) because they are not getting any playing time and they realize "if I want to play, I better find another program." Do your research how many athletes that ARE PLAYING leave a program in the MIDDLE of the season? Something is WRONG with that picture. The athletes at KU are realizing that their talents are not being used correctly by HCBH and they are leaving ASAP now. Two from last year, one from this year.

mom_of_three stick to your expertise taking care of your three. lol

Same old same old. No NCAA tournament, no more Bonnie. See if Lew can find her another job. Thanks for everything Lew.

One more year on her contract Zenger will not renew and we will move one. Won't cost a buyout!

They gave away free tickets and could only get 3700 people in the stands??? WOW!!

I wonder if the Ladyhawkes are unfairly compared to the men's program and suffer by comparision. OSU is 15-3, not exactly a creampuff of an opponent,

It does feel like the girls and guys are in a turnover race...in a bad way!!