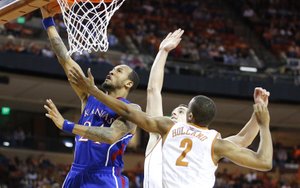 Images from Saturday's game against Texas in Austin.

Austin, Texas — If Texas sophomore Sheldon McClellan is watching instead of playing when his team is trying to protect a late lead again, he need not wonder why.

McClellan’s words in the wake of the Longhorn’s latest fall-from-ahead loss, 64-59 Saturday to Kansas in the Erwin Center, caught the attention of his coach and not in a good way.

Texas already had lost 10-point leads in the final four minutes against UCLA and West Virginia and led by as many as 11 points Saturday against Kansas.

Basketball coaches across America preach “next play” to athletes, stressing that what’s in the past is in the past. But bad history, even if it’s not from the same game, can have a way of creeping into a player’s psyche.

“It definitely crosses our minds, us being there before, just like the last couple of games we’ve been having the lead and losing the lead,” McClellan said.

The team’s leading scorer emerged from coach Rick Barnes’ doghouse to score 18 points against Kansas after playing just one minute in a 20-point loss to Iowa State.

Once McClellan’s confession on his late-game thoughts reached the ears of Barnes through a reporter, the coach didn’t sound very happy.

“That’s mental toughness and that’s exactly what we’re talking about,” Barnes said. “If that’s what’s on your mind — and I’m glad you said that — then you shouldn’t be on the floor because there are other guys that I don’t think are thinking that. If that really enters your mind, I mean, that’s winning time. You can’t have guys thinking that, so I’m glad you told me that because if that’s what he’s thinking, he can’t be out there.”

Neither Barnes nor Kansas coach Bill Self questioned UT’s Julien Lewis for firing up a potential game-tying three-point shot with 13 seconds remaining.

“That situation, down three, he got a good look at it,” Barnes said. “He’s made that shot a lot.”