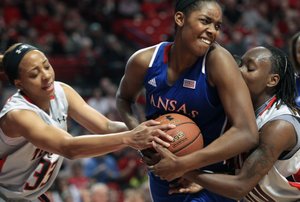 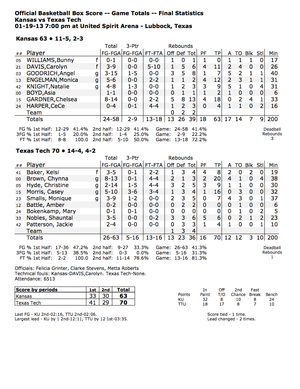 Sophomore forward Chelsea Gardner led the Jayhawks (11-5 overall, 2-3 Big 12) with 18 points and 13 rebounds off the bench. Kansas fell behind, 9-2, in the first three minutes and trailed 41-33 at the half before mounting a second-half comeback. Gardner filled in for senior Carolyn Davis (11 points, six rebounds), who played just eight minutes in the first half after picking up two personal fouls and a technical with 11:57 remaining.

Senior guard Angel Goodrich was scoreless at intermission but combined with Gardner to score 11 of KU’s next 15 points to give the Jayhawks their only lead of the game, 48-47, with 12:11 remaining. The Red Raiders (14-4, 4-2) responded with a run of their own as Chynna Brown (game-high 20 points) put Texas Tech ahead for good.

The Jayhawks pulled within 65-63 on a Davis free throw with 1:20 to play, but Kansas wouldn’t score again. Texas Tech sealed the victory with five free throws in the final minute.

Goodrich finished with seven points on 3-of-15 shooting, eight rebounds and five assists. Monica Engelman added 12 points and Natalie Knight had nine for the Jayhawks, who return home to host Texas at 7 p.m. Wednesday.

Bad bad loss Jayhawks. Lose a few more gimmes and your chances of making the women's NCAA tourney will be gone. We need to get this thing turned around quick! Still have faith. Rock Chalk!

Looks like Bonnie Ball is back, pad the record in non-conference and not have the team prepared to handle the rigors of playing in one of the two best conferences in WCBB. If they rnd up missing the tournament this year, Bonnie needs to be gone and a coach wgo schedules tougher teams and doesn't tease us every tear with inflated records needs to be brought in.

Same old same old. One NCAA tournament appearance in 8 or 9 years. We are 2 and 3 in the conference with the best collection of talent HCBH acknowledges she has ever had. Davis looks immobile and unmotivated. Gardner and Harper should see more minutes. Obviously there is some disharmony on the team. Jackson quits and the players' body language shows their indifference at times. No tournament no more HCBH. Her tenure has, to state the obvious, been most disappointing. Highest conference finish is 6th I believe. How long to we continue to reward inadequacy?

Another terrible loss. Can someone tell me why we are always trailing in the first 5-6 minutes of the game and cannot seem to claw our way back into contention? My opinion: Because the right kids are not on the floor. ME is scared to play(have been for quite sometime), NK is running around in circles with the ball afraid to make mistakes since everyone is painting this picture perfect game, BW should definitely not be starting(if she can't get rebounds then she should not be in the game). Nothing personal against any of them, but if this team is to be successful some shakeups in the lineup has to be made. AG, CG, and CH are the only ones that see consistent minutes that seem to have mental and physical toughness throughout the game. CG should DEFINITELY NOT be coming off the bench IMO. AB should be put into a situation to see what she can bring to the court, think she has that same mental and physical toughness. Also don't understand with the shortage of players, why are the other two not seeing the court (LC and MH) How can they get experiene if they are not put into situations? Makes me really wonder like many others why TJ really quit in the middle of the season. This team is talented and can play with the best of them, but won't until some changes are made. Most coaches make changes or adjustments when things are going bad and shake up lineups, etc. Have not yet seen that in this coach (Same starting lineup first and second half, no matter what the situation or how bad we are getting our tails kicked). Not sure what it is going to take for her and her staff to realize something is just not right. I think getting to the WNIT will be their best bet this season if things don't start to look up from here. Hope to see better play in the coming weeks!!!!!!!!!!!!!

Why does this team always start out looking so good and then flop? I know TTU has a rich tradition of women's BB and that Baylor is impossible to beat right now, but the KU ladies don't look too good at the moment either.

KU Transfer Keena Mays doing her thing again. Had she stayed at KU, we could have really had a special year, but then again she probably would not have been allowed to do what she is doing at SMU...That is playing like she is capable of and not being held back!

IRVING, Texas (SMU) - Junior transfer Keena Mays was named Conference USA Player of the Week for the second time this season after averaging 17.5 points to lead the first-place Mustangs to a pair of conference wins and the first 4-0 start to the conference season since the 1999-2000 season, conference officials announced Monday.

Mays scored 25 points, making a career-high six 3-pointers, in SMU's 73-51 win against Rice on Sunday, her sixth game with at least 20 points in nine games played this season. She also had 10 points in a road win at Southern Miss, giving SMU five players with at least 10 points in the same game since Nov. 27, 2010. The Arlington, Texas native had 11 assists, passing out seven at Southern Miss which is the third most in a C-USA game this season. She also recorded five steals and three rebounds in the two games.