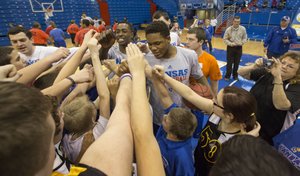 Bill Self asked about 100 Special Olympians from the Sunflower State to do a favor for his Kansas University basketball team on Sunday in Allen Fieldhouse.

“We need to have a good time because we had a bad time yesterday afternoon,” Self, KU’s 10th-year coach, said before introducing his players to the Olympians at the start of the 29th-annual Wilt Chamberlain Clinic.

“We need you guys to cheer us up. Could you do that for us?” Self asked, to a rousing round of applause from the campers.

The Jayhawks, who were coming off of Saturday’s 85-80 home loss to Oklahoma State, did indeed have their spirits boosted by players on teams from Kansas City, Junction City, Lawrence, Salina, Shawnee, Topeka and Wichita.

“It’s good to get out of the bedroom,” said KU senior center Jeff Withey, who might have been tempted to sleep all day and mope a bit the day after KU had its 33-game homecourt win streak snapped. “This is a great event. Everyone looks forward to this event. Every year it’s a lot of fun. Everybody is giving you a hug or a high-five. It’s definitely good to give back. It makes you really grateful for everything. It’s fun to be part of the Special Olympics community and just to be around the Olympians and show them we care about them just like they care about us.”

Asked before the clinic if the Jayhawk players were brooding about the loss, he said: “A little bit. At the same time, we know it’s behind us. We can’t do anything about it now. It happened yesterday. We have to move forward and learn from it. You have to try to spin it into a positive and work hard.”

All of KU’s players and coaches took part in the clinic, which included two hours of work on basketball skills and scrimmages. There also was an autograph and picture-taking session.

“It’s a great day to have this, particularly this year because we are coming off a loss,” Self said. “If I’m not mistaken, it’s happened a couple other times where we’re coming off a loss. On Sunday, we can kind of re-prioritize and do something that’s cool, neat, feel good about ourselves and help some others out. I think we get as much out of it as the Special Olympians do.

“It’s always nice to be able to look at people and realize there is totally unconditional love and feelings. You feel that with the Olympians. A lot of these Olympians and families have been dealt a different hand than what we’ve been dealt. It’s great to see love, attention and support, and I know our guys really enjoy the day.”

“I’m so excited, and I really love it,” Henderson said of the event which she has attended twice.

“I’m a big fan of KU and these players are amazing,” Nichols said. “My favorite player is Ben McLemore. He makes threes like no other.”

Upon further review: After looking at tape of KU’s final possession, Self still believes point guard Elijah Johnson should have hoisted a three-pointer with about five seconds left and KU down three points. Instead, he had the ball stolen by Marcus Smart, who pitched ahead to Phil Forte.

“He had a shot,” Self said. “They called timeout (after two Forte free throws), so I thought they’d foul, and they didn’t foul.

“We were going to run a little pitchback play, and they guarded Ben (McLemore), face-guarded him in the corner, so that wasn’t going to be open. Elijah had a chance to get him (defender Smart) on his heels and didn’t. He crossed over in front of him, which wasn’t a good play.

“In those situations, when you are down eight with less than a minute left, everything has to go perfect, especially when Oklahoma State makes its free throws. They made their free throws down the stretch. We had to play perfect. We actually did a pretty good job with the exception of not getting a look at the last (play). Even if we got a look, it wouldn’t have been a high-percentage (shot). It probably would have been a 20 to 30 percent shot. We’ve had some guys make some big shots when the game is on the line.”

A home loss stings, not the end of the world, nothing ever has been.

If the players learned the lesson of delivering a few more punches after leading by 14, this could be the last loss for the season.

This kind of interaction settles you all the way to your soul. Nice job guys.

No, but I wouldn't doubt it. They definitely use tracking cookies for the ads.

Hopefully these athletes remind the team that basketball is a fun game to play. It's not a job...yet! Play loose. Have fun. Bring home another Big XII!

Also, you play the game to have opportunities like this! It really is a charmed life being a Jayhawk.

It still hurts Monday morning. I guess it is supposed to. I wish we were playing Mizzou on Wednesday.

Helping others less fortunate than you is good all time, any time, every time!!

Due to the blacked-out Yes Network in St.Louis, couldn't watch it or record it and being at a charity function, couldn't follow it online. Guess I picked a good game to go "dark territory" on.

Very well stated AtlJaybird!!! Sunday was a great way to end the weekend!!! Now guys, count your blessings, get set for the rest of the season and let's show who we really are--The Kansas Jayhawks!!!!

EJ's slump ends Wednesday. Step up Elijah, we need you!

The look on the Olympian's faces > as well as the players , says it all. This event is a great example > and hopefully, an inspiration to each of us, to find the time and opportunities, to give back and provide something of ourselves to another person > be it one individual, or a group of persons.

There are plenty of opportunities right in your own "back yard" > and you have more to offer than even you realize. Just in reading this article, Saturday is but a distant memory for me > and can't wait 'til Wednesday.

Thank you, KU staff, coaches and players for giving these young people a day they will never forget > nor will I. ROCK CHALK, JAWHAWKS

Teaching all those kids the fundamentals will be a great way for the players to remember them. Just Have Fun Jayhawks!

I'm thinking of taking a sign to the game Wed. night against TCU for ESPN's sake which reads:

There is only ONE Rock Chalk Chant. Get it right!"

For some reason, they edited my comment. It was supposed to read "Hey ESPN: UK does NOT equal KU!"

LOL! Roger that :) Look for me on TV. I'll be the one with the KU t-shirt and TCU baseball cap.