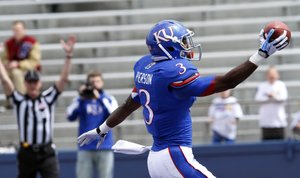 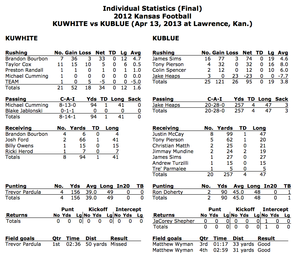 If anybody needed to have a big game in front of a crowd Saturday at the Kansas University football team’s spring intrasquad scrimmage, it was Justin McCay, who will be both a fourth-year rookie and a junior in the fall. He had it all right and it just made him hungrier to do it in a real game, something he hasn’t experienced since he was a big-time recruit catching passes for Bishop Miege in 2009.

McCay plays the wide receiver position the way a bruising power forward plays basketball. He doesn’t throw blocks. He slams them. When he goes up to catch a pass in a crowd he’s the one who comes down with it because he has bullied his way into position and he has terrific hands.

McCay put his soft hands and mean hands all over the Blue team’s 34-7 victory against the White team Saturday in sunny Memorial Stadium. He caught eight passes for 99 yards and a touchdown and had a better day blocking than catching. Three plays stood out: Reacting to Jake Heaps’ spot-on 47-yard pass, McCay jumped to catch the football with his left hand. McCay also went up for five-yard touchdown pass from Heaps on a fade to the corner of the end zone. The loudest of McCay’s many punishing blocks left senior cornerback Deron Dangerfield on the ground for an extended period of time.

McCay needed a day like the one he had because he has spent the past three autumns watching others catch passes. In 2010, he red-shirted at Oklahoma. In 2011, he made blink-and-you-missed-it appearances in three games. He transferred to Kansas hoping to be granted immediate eligibility as a personal hardship case, but his appeal to the NCAA was denied. Understandably, in the weeks after hearing the bad news, he had difficulty playing with passion a spring ago. Throughout this spring, most notably Saturday, he showed why Oklahoma wanted him in the first place, even though he’s not as fast as most receivers the Sooners recruit.

“It humbles you,” McCay said of his long wait. “It makes you more hungry when you get on the field.”

Playing on the winning side “feels good, really good,” McCay said, “but I want to do it against real opponents,” not teammates. “I have a chip on my shoulder. I’ve been sitting out for a while, so everything’s personal on the field.”

He boils football down to its essence and brings that attitude onto the field: “Be more physical than the other guy,” he said.

Kansas coach Charlie Weis said of McCay, “He’s as physical as I’ve seen at the receiver position blocking and he enjoys it. Most receivers don’t enjoy doing it. They do it because they’re asked to, not because they want to. He actually enjoys the physicality. He’s not one of those guys who considers it a burden when you’re asking him to block.”

McCay said he tries to be “a well-rounded receiver, make the plays that come my way and being a receiver includes blocking. It’s just being unselfish. You want them to block for you when you have the ball, so why not do it for them?”

During a passing-challenged 1-11 season last fall, Weis from time to time mentioned that Heaps and McCay were lighting it up on the scout team, which the coach refers to as the “show team.” Perhaps he did so because thinking about the state of the passing game then was just too painful. Heaps and McCay did more than prepare the defense for the next game. They bonded.

The 47-yard completion on the left sideline provided a good example.

“Justin doesn’t run a 4.3, so you have to put the ball in a position where he can make the play,” Weis said. “Obviously, one of the things we didn’t have last year, never saw a guy make an adjustment on a deep ball. He goes up and plucks it. I call it pluck-ability. Seriously, that’s what Justin has. He has pluck-ability. Instead of being a 6-2, 6-3 guy who plays 5-11 guy, when he goes up after the ball he’s got a chance.”

And McCay has a chance to make a name for himself as a college football player come fall. Finally.

McCay reminds me of Anquan Boldin with his pluck-ability and strength. Huge upgrade at a position of need.

I hope Deron Dangerfield gets more involved this season, mostly because he has the best football name ever.

Without a doubt this ku team is more physical and talented. They looked well conditioned and much more fundamentally sound, particularly on offense. Much more than I expected in April. That's for sure. I'm feeling confident we are a 3-9 team.

Your statement above is depressing.

Lol. It was rather depressing at the end. o_O

Ok, I understand the pessimism but really 3-9? Honestly I can see this team going 4-0 going to Dallas to take on TCU. I think the mixture of some really good runs (sims, cox, TP and bourbon) with some big time playmakers in the passing game (Not counting new faces but Mundine, TP and McCay plus Turzelli, Ford etc) again I can't say win 4 or 12 but I think saying this team is good they should win 3 is sad. I for one set my heights every year (again I'm disappointed more often than not) with a Conference Title for all KU teams. So take my optimism for what it's worth .... FANDOM but I'm excited.

I hope I hear "Heaps to McCay" a lot this season. I thought Josh Ford showed some "pluck-ability" as well.

I've always thought that heaps-mccay on the show squad together would hopefully build chemistry. Again, I hope they can do this during game day as well. If they do, we will be that much better. All good teams have had that one good receiver that the qb can rely on. I hope this is the case.

We will need more than Heaps to McCay to compete in the Big 12. The Blue squad was vertically challenged. I know that everyone was following the script but we will need to stretch the field by week 2....or face another long season. We have to double our points production just to crack the top 7! The only way to do that is the long ball.

Our receivers couldn't get open last year. I hope that this year will be different.

Josh Ford looked pretty good too, those are two big physical receivers on the roster.

Who is Deron Dangerfield? Never heard of him before today.

I think the year of seasoning really helped Ford. In addtion to the year in the weight room.

Looking forward to seeing an 8-4 season.

Don't look now but the defense got torched as much yesterday as they did last year. You have to keep the other team's offense on the sideline. Offense wins games, defense wins championships.

Well, one side had to win. Right?

Weis said the game plan was to eliminate Martin as a factor in the pass rush, because he would be too disruptive. That, and we still have multiple JuCo guys coming in this summer that could earn immediate PT. I think it's a little early to write off the D based off a single glorified scrimmage -- and if you're the glass-half-full type (which you may not be), it was tough to not be encouraged by Jake Heaps zinging the ball around the field.

To be fair, it was basically the second team defense that got torched by the first team offense.