During a recent meeting with the media, Kansas University football coach Charlie Weis said flying to the football had been an emphasis for the KU defense so far this spring. 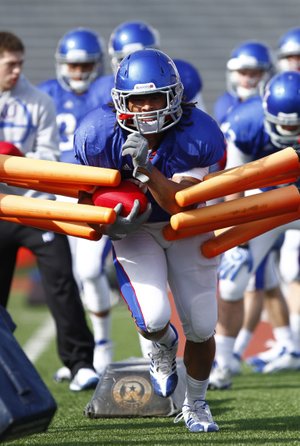 The idea of sending 11 blue helmets to the ball on every play has been so important that the coaches have begun charting what they refer to as “loafs” for the defensive players who don’t do it.

Although the wind hit Memorial Stadium with an unusual April chill on Tuesday, the defense seemed to have gotten the message, as players routinely sprinted to ball-carriers during defensive and special-teams drills.

A few positive plays in one practice certainly does not mean the defense has the concept licked. But Weis’ explanation of what a loaf is and what happens when one is recorded sends a stronger message.

“(A loaf) is when a defensive lineman thinks he is out of a play and thinks he will save his energy because someone else will finish the play,” Weis began. “That is one of the things that we have to get much better at, as a defense, to get all 11 guys running to the ball on every single play. When I first got into college football back in the mid 1980s, I went to the University of South Carolina. They had an undersized defense called the Fire Ant Defense because they swarmed the ball on every single play. I think, defensively, if all 11 guys swarm the football, you always have a chance of being very successful.”

Asked if the coaching staff kept track of loafs, Weis answered with a nod and a smile.

“Not only do we chart the loafs, but to end every practice, they do up-downs for every loaf,” he said. “If the team has 22 loafs over the course of a practice, they circle up and do 22 up-downs as a team to end the practice. We make them do it when they are really tired, and we call out the name of each player that loafed, so every player is accountable for the effort they give in each and every practice. It definitely stresses the point we are trying to make.”

Sophomore cornerback Tyree Williams sat out of Tuesday’s practice with his lower left leg wrapped. No players or coaches spoke with the media after Tuesday’s practice, but Williams, a 6-foot, 185-pound defensive back from Stafford, Texas, showed up near the end of drills and was on crutches.

There has been no word from KU officials about the type or severity of Williams’ injury. Williams was listed as a second-string cornerback on KU’s pre-spring depth chart, battling with junior Nas Moore for the right to back up newcomer Cassius Sendish.

Freshman running back Colin Spencer, who graduated high school early and reported to KU in time for spring drills, consistently has shown the one trait that makes him a threat to earn playing time during his first season in Lawrence — his speed.

That was again on display Tuesday, as Spencer flashed his wheels in both running and receiving drills. Asked recently how the 5-10, 180-pound back from Dallas had adjusted to college football, Weis painted a picture of steady improvement.

“It was interesting because, at the beginning, he was like a chicken with his head cut off,” Weis said. “But I think the game has started to slow down for him. His whole game is his quickness and his strength. The kid has less than two percent body fat. When you have to think, then you don’t play as quick. As he has become more comfortable, you begin to see him playing more comfortable. In August, he will be totally different than if he were just showing up in August. That is a big advantage for him. He is getting all of the original kinks worked out early, so, by the time training camp rolls around, he will hopefully put himself in a position to compete right away.”

Now, now. That's just the kind of talk that got Mangino fired. Remember, this is Lawrence.

There is nothing in here that even remotely resembles what MM pulled. This is discipline vs abuse, and it is sad that some still don't get it.

Is Spencer our next Tony P? Obviously, he didn't get nearly the same HS hype, but ... Really excited to see what CW can do with Tony this year.

That's because Spencer was recruited as a defensive back.

Coach Weis needs to make Pierson our "Percy Harvin" on the field. The Jayhawks can obviously live without the off-field antics of Harvin...haha, but with Pierson's agility and speed, he'd be dangerous in the slot, on the end, or in the back field. Super versatile, just like Harvin.

Hey Charlie, Gort would like to see the crimson stripe put back on our helmuts, think about it.

I think we should go with the Jayhawk on the helmet. But not the current Jayhawk, the 1941 angry Jayhawk

Every player went to the ball. Our defense flat shut down Sproles and frustrated the hell out of OU's offense that year, they scored something like 16 or 17 points on KU's defense. They also shut down Nebraska in 2005, 121 total yards for the game, 3 first downs, a linebacker picked off a screen pass and returned it for a TD, Kansas won 41-16. Kansas beat Kansas State the year before. If we had that defense in 2007, Kansas would have been national champions.

No loafing around? Some one say that to the fat bastard coach. I bet there isn't a loaf he's not around.

This sounds like a really good way to have the ball get behind you and give up big plays.

It sounds if the team is on the right track to get going... It's good to have articles on here to keep the fans updated on whats going on and who/whom is still on their way to the KU campus. Damn, it would B nice to have a good/great season next FALL, all this practice and weights are going to pay off for the HAWKS!!! It would B nice to SEE winning football at KANSAS once again... GO HAWKS!!!