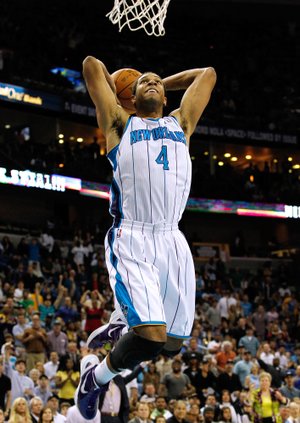 New Orleans Hornets guard Xavier Henry — who had been working out in the Big Easy after undergoing arthroscopic knee surgery on July 27 — hopped in his car and headed north last Monday, just a few hours ahead of Hurricane Isaac.

“I was down there with some of my teammates getting ready for the season early because we’re so young,” said Henry, a 21-year-old, third-year pro out of Kansas University.

“We’re trying to get acclimated with each other. They told us Hurricane Isaac was coming and didn’t know how bad it would be, so they let us evacuate. I went home (to Oklahoma City) and got some treatment then came here,” Henry added before the KU-South Dakota State football game Saturday outside Memorial Stadium.

Henry played at KU as a freshman in 2009-10 before entering the NBA Draft, where he was selected 12th overall by Memphis. He spent the weekend in his former college town, headed back to OKC on Sunday and was to drive back to rain-soaked New Orleans sometime this week.

“It’s great to be out here because the atmosphere at Kansas is something I’ve never been around ever in my life. It was the best time I’ve ever had in my life,” Henry said of his year as a Jayhawk, in which he averaged 13.4 points and 4.4 rebounds per game.

The sweet-shooting lefty, who helped KU to a 33-3 record, has battled a series of injuries his first two years in the pros.

“Injuries happen to everybody. It’s how you deal with them,” said Henry, who played in just 38 games for the Grizzlies his rookie season. Memphis cut ties with the 6-foot-6, 220-pounder, trading him to New Orleans last January for a future second-round pick.

“I learned by being mature, by having to grow up, that the only way I can get past it (injury) is playing through it and doing the best I can. I’ve done my part getting the surgery I needed. I just need to rehabilitate to the best of my ability and go out there and have fun,” added Henry, who averaged 5.3 points off 39.5 percent shooting while logging 16.9 minutes a game in 45 games for the Hornets a year ago.

He upped his scoring average to 12.2 ppg in Las Vegas summer league action in July.

“We (he and the Hornets) hope so,” Henry said, asked if this would be his breakout season. “I’m going to come in and bring energy, scoring, defense. I play an all-around game. That’s what they’ve been looking for me to do. With my knee healthy now, hopefully I can play this whole season healthy and have a great season,” added Henry, who has one year left on his contract with an option for the following season.

Henry on Saturday provided an update on his brother, former KU guard C.J. Henry, who transferred to Southern Nazarene University in Oklahoma City after also playing one season at KU.

“He’s getting back into baseball again. He’s having fun with that, working out a lot back home (OKC),” Xavier said of C.J., a former first-round draft pick of the New York Yankees. “He’s waiting for this offseason to get back in (and sign with an MLB team). He’s doing his best right now to get in baseball shape, get everything in focus. I don’t know how much hard work it takes for baseball, but he’s definitely putting it in.”

“I’d be a senior this year. Me, Elijah and T-Rob (Thomas Robinson, Sacramento Kings) came in together,” said Henry, who enjoyed visiting with former teammates Elijah Johnson and Travis Releford on Saturday at a basketball team autograph signing session for fans on KU’s football practice field. “It’s nice to come back. Everybody still enjoys me and appreciates what I’ve done, and I appreciate everything they’ve done for me as well. I love this place.”

He also is fond of New Orleans and is relieved Hurricane Isaac did not devastate the city.

“In New Orleans, I was hearing the power got cut, but the floods weren’t bad,” Henry said. “Near the border line, I heard the water was over rooftops with broken levees and stuff. It wasn’t bad in New Orleans, but I feel really bad for those affected.”