Kansas University junior Caroline Jarmoc had a career game for the second day in a row, and the Jayhawks completed a sweep of the Kansas Invitational with a four-set victory over Arkansas State, Saturday at Horejsi Center. 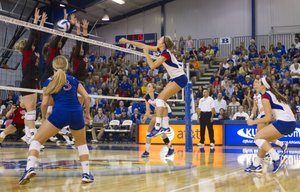 “Offensively, people had a hard time answering her,” KU coach Ray Bechard said. “She continues to pick it up on defense and was changing the game with her block. She also created opportunities for us with her serve. She gave a well-rounded effort this weekend.”

McClinton, a sophomore, had 11 kills Saturday against the Red Wolves, while McNorton, a junior, had 136 assists in the three-game tournament.