Kansas receiver Christian Matthews (12) gets a block from lineman Tanner Hawkinson (72) as he hurdles into the endzone against Texas during the second quarter on Saturday, Oct. 27, 2012 at Memorial Stadium. 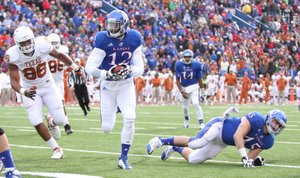 The name of the formation was not divulged, with quarterback Michael Cummings even going as far as to call it "a secret," but a new-look offensive wrinkle for the Kansas University football team proved successful for the Jayhawks during Saturday's 21-17 loss to Texas.

The formation, which multiple players said was known simply as "No. 12 at running back," featured Cummings, flanked by wide receiver Christian Matthews and fullback Nick Sizemore, taking the snap from center while standing a few steps in front of speed back Tony Pierson.

The first time the Jayhawks ran it Saturday, Matthews kept the ball and raced in for a 15-yard touchdown. One series later, Matthews delivered an option-style pitch at the last second to Pierson, who picked up three yards and a first down. Pierson scored on the next play.

"We put that specific play in this past week," Cummings said. "But the formation and the personnel has been in all year."

Matthews, who has been used just about everywhere except for his original position of quarterback during his KU career, said he liked the package because it gave KU so many different ways to pick up yardage.

"I've never really played running back here before," Matthews said. "I'm just glad (KU coach Charlie Weis) has the confidence to put me in and handle things like that. I could care less how many yards I get or how many touchdowns I gain. We just want to win a game."

Making just the second start of his career, Cummings ran the KU offense well, delivered a couple of timely throws and, generally, looked comfortable as the Jayhawks' leader.

"He was never really flustered," said Weis of his QB who finished the day 3-of-9 passing for 39 yards. "I felt the same thing last week against Oklahoma. I'm sure there's going to be things on the tape that we say, 'Well, why did you do this?' Or, 'Why did you do that?' But at the end of the day, I think the kid wasn't flustered. At this point right now in the growing process, composure is a very key ingredient."

The ever-humble Cummings said he did not sense much difference between his first start and his second start — only that the team played better as a whole Saturday. To him, though, that meant very little.

"We come out as competitors to win," Cummings said. "And we didn't win, so we came up short today."

KU's defense was forced to play part of the fourth quarter without two starters. Defensive end Toben Opurum and linebacker Jake Love both were injured in different places on the same play during UT's game-tying drive early in the fourth quarter. Opurum returned to action a little later, but Love did not play during the rest of the game. Weis had no further update on either injury following the loss.

"Toben was back in there because he was politicking me," Weis said. "I said, 'We'll use you on third and long.' Other than that, I wasn't going to let him go. He was working (defensive line coach) Buddy (Wyatt) really hard. Then he looked at me. I said, 'Third and long.' He was moving around OK. We'll just have to wait and see. Bumps and bruises, usually by (Sunday), are either way better or way worse. Whatever they are right now, they don't stay the same."

Big 12 commissioner Bob Bowlsby was in attendance at Memorial Stadium on Saturday, one of three venues the commissioner said he hoped to get to during his wild day.

The trip was scheduled to begin Lawrence, move to Manhattan for Kansas State's 2:30 p.m. kickoff against Texas Tech, then end in Norman, Okla., where the eighth-ranked Sooners played host to No. 5 Notre Dame. However, flight plans that would have made the last leg possible fell through.

The Jayhawks lost Saturday's opening coin toss for the second week in a row after winning it during each of the five previous weeks. Texas elected to defer its choice to the second half, and KU chose to receive the opening kickoff. ... Senior left tackle Tanner Hawkinson added to his school record of consecutive starts. Saturday's game was Hawkinson's 44th straight start. He broke former linebacker Nick Reid's record of 42 in a row last week at Oklahoma. ... Red-shirt freshman offensive lineman Damon Martin made the first start of his career at left guard. ... Senior defensive end Josh Williams served as the team's fourth captain after being voted by KU's coaches as the top special teams performer against Oklahoma. ... Temperature at kickoff was 41 degrees under partly cloudy skies with winds of 4 mph out of the northeast.

So disappointed, but encouraged.

Agree. Disappointed with a loss, but at the end of the game, I felt some pride in the team -- they did not quit, we have discovered a consistent quarterback, and are athletes are every bit comparable to the Texas 5 star athletes. I see improvement, very few penalties -- I feel confident that Wise is going to turn this around. I see an orange bowl in 2 years.

I'm very encouraged. This new formation is evidence of great coaching. Our Time Will Come.

Going from getting out gained by 543 yards last year to nearly winning this year is a great sign of how much this team has improved and how big of an upgrade we got in the coaching department. Special teams was a lot better. Cummings didn't turn it over. Now it's time to see this team be competitive for 4 quarters on the road against a good offense.

Seeing Cummings game manage from the QB position makes me wonder how much better we would have been early in the season if CW hadn't had so much confidence in Dayne. There were other games where we were churning up the ground, but CW put the game in Dayne's hand/arm and the whole thing unraveled.

That being said, still wondering about Sims getting less than 40 yds in the 2nd half. Are we lacking the depth or the conditioning or something else?

I don't think it had anything to do with depth or conditioning. Texas was keying on the run. We were completely 1 dimensional and Texas knew we were just going to keep running the ball. A few pass plays, especially in the 4th on 1st down might have loosened up the Texas D to allow the running game to continue to pound.

Re: passing once in a while on "running" downs.....I couldn't have said it better myself. Running was/is our strength, but you CAN'T be one dimensional like that. I don't care if you throw an incompletion, you have to make UT believe you can and will throw.

I honestly think that TO and JL going out on that same play and last defensive stand all but cost us the game. They were key to our defense all day, and to lose both of them on the same play proved to be devastating in my eyes. The defense was excellent all day, the best i think any of us have seen all year, but losing two starters was too much for them to handle and the lack of depth showed up. Still, like others, i'm very encouraged to see the improvemetn on D, when our special teams comes around, maybe this year maybe next year, i feel that we'll have a well rounded team that will compete for wins week in and week out and will win games like this weekends. rock chalk.

I was totally bummed by the loss yesterday but also very, very proud of the way the team played all day. It has been years since we have seen defensive play from KU like we saw yesterday. A goal line stand? Against UT? Freaking awesome! We almost pulled it off a second time at the end of the game but it just wasn't to be.

We may be 1-7, but I still look forward to each Saturday with anticipation and a belief that we can win the game. I don't see a game remaining this year that I won't have that feeling.

Finally, I wanted to commend the fans that actually were at the game. You can't blame them for the stands not being full. After the game, we stood with the students and sang the alma mater with the team. When the team was coming over to the stands the fans were giving them a well deserved ovation. Yesterday maybe wasn't the biggest crowd, but it was definitely one of the most passionate and appreciative crowds we have had in years.

Really?! Look at the Photo at the top of this article -- you can clearly see rows (and rows) of 'empty' seats where the Student Section is 'supposed' to be . . . as an Alum back for the game I was embarrassed by the lack of turn-out and, other than a few spirited 'ROCK CHALK! . . . JAYHAWK! cheers after our scores, there was just very little life/energy exhibited by the crowd. Unfortunately, everyone seems to be sitting back and waiting for 'something good to happen' whereas other fan bases come together to WILL their team's to do so (ever been to a game in Athens, GA, College Station, TX, Happy Valley, PA or Lincoln, NE?). I'm not hatin' -- just being 'real' . . . disappointed. Not with the team, but with the fans as I LOVED seeing how excited/passionate our players were on Saturday -- many (like Toben) who are from Texas and would have loved nothing more than to beat the school they may have looked up to, but were not recruited by. I feel like WE let them down...

What picture are you lookin' at??? Except for a small section in the upper left, the stadium seems to be full, and a lot of them are wearing blue too! I am not seeing a whole lot of orange there! I can't comment to what the fans did or did not do because I wasn't there, but for a team that has only won one game so far, I think the attendance is pretty good. I feel better about the future of this program than the Chiefs! Two programs with one win going in very different directions!

During the game, there was clearly a lot of empty seats. It was Homecoming for cryin' out loud. No excuses. If the students want respect in football, THEY HAVE TO FILL THE STADIUM.

So the teams for comparison you picked are Georgia, Texas A&M, Penn State and Nebraska? Yeah, that's a fair comparison.

Still, I'm glad you made it back for the game.

Patience. When we win they will come.