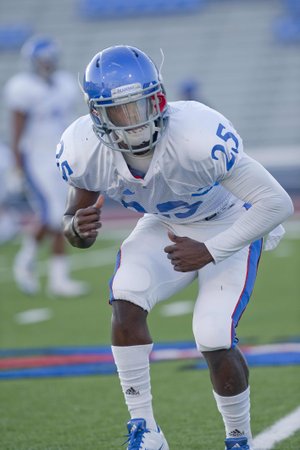 Through the first seven games of Kansas University’s football season, one of JaCorey Shepherd’s biggest plays was one he didn’t make.

With the Jayhawks trailing 10th-ranked Oklahoma 3-0 in the first quarter of last week’s loss, Shepherd found himself matched up one-on-one with OU standout receiver Kenny Stills. As Stills ran a deep route to the end zone, Shepherd lost contact briefly but then closed the gap and wound up running step-for-step with Stills as the ball hung in the air and eventually landed in Stills’ hands for the first of seven OU touchdowns.

“It actually went down my hand and into his arm,” Shepherd said. “If I would’ve played the ball more … I feel like I played the man too much. Right after the play, though, that was the thing, I wasn’t down on myself, I was like, ‘Man, I was right there, stride for stride.’”

Shepherd was not the only one impressed by his coverage on one of the Big 12’s best receivers. KU coach Charlie Weis, defensive coordinator Dave Campo and safeties coach Clint Bowen all said Shepherd showed both his raw ability and his inexperience on that play. The latter is something they can work on. The former is something they’re glad to have.

“He has the ability where I think we could eventually see him being pretty solid,” Weis said of the sophomore cornerback. “Just the fact that he was right there with a 44-yard throw that was right on the money, it’s good he was there. Now you gotta finish it off.”

In the offseason, the 5-foot-11, 185-pound wideout from Mesquite, Texas, dropped far enough down the depth chart that Weis and Campo decided to try him out on defense, where the Jayhawks lacked speed and depth. At first, Shepherd was unsure about the idea. But the way Weis presented it to him and, more importantly, the chance to play, changed his mind, and KU’s latest offense-to-defense experiment was under way.

Early in the season, Shepherd’s progress showed up mostly in practice, and the coaches seemed hesitant to put him on the field because no one knew if his raw talent would translate to Saturdays.

“He’s like a starter,” Weis said. “He’s basically playing the third corner, so when we go nickel, he’s a starter right now. When he goes in there, (junior Tyler) Patmon’s been moving inside, and (Shepherd’s) out there.”

Shepherd has received all kinds of advice from all kinds of places during his whirlwind two-month transition from the guy catching the passes to the guy breaking them up. His father impressed upon him the importance of having a short-term memory, and his teammates in the secondary, the guys he used to talk trash with, have helped him adjust.

But it turns out one of Shepherd’s best tools in this transformation was his past. The years he spent honing his skills as a wide receiver have helped tremendously in his attempt to play defensive back.

“At receiver, I always watched a lot of film on other DBs,” Shepherd said. “I was always taught the best way to beat a DB was to watch and learn what they do. Now it’s the same thing but different. I’m actually playing DB.”

There are times when all of that knowledge can cause problems, most often when Shepherd’s mind and what he sees pre-snap tempt him to believe the opposing receiver is going to run this route or that one.

“When I played receiver, I was taught to run each route at least two or three different ways,” Shepherd said. “So it helps me, but I try not to be too aggressive or guess too often.”

Shepherd’s natural athleticism has led to early success, and he has improved his technique every step of the way. He just recently got comfortable “opening up and running” and said he now has a better grasp of when it’s time to get out of his backpedal.

So well that Shepherd said he actually could see himself sticking with defense for the rest of his career.

“In the beginning, I was like, ‘Man, if they give me an opportunity to go back, I’m going,’” Shepherd recalled. “But as I went on, coaches were telling me, ‘You could be real good.’ I was hearing them, but as the weeks went on, I started agreeing (with) them. I see I’ve got the potential. I’m not trying to be selfish. If they need me to play here, I’m gonna play here. I’m starting to let that receiver slowly go away.”

I've always liked this kid. From the moment he stepped on campus both he and his family have been nothing but respectful towards the University of Kansas. Actually, I remember an article last year where his father was praising coach Gill's honesty. He was saying that everything that went on from the moment his son stepped on campus was exactly what coach Gill said it would be. To be quite honest, I thought with remarks like that he would be one of the first players to transfer, mainly because it seemed he was truly committed to Gill.

I like his attitude towards his new position, and I also think he's going to make a great DB. He may not be Aquib Talib caliber, but he will surely make an impact in his remaining 2 1/2 seasons. Keep up the good work JaCorey, and as always, Rock Chalk.

Rockchalk, I appreciate your positive reference to Turner Gill. In spite of his dismal record and coaching shortcomings, Gill did some good things while at KU. First, he conducted himself and his program with utmost integrity, and second, he brought in some good kids and talented players (JaCorey is a great example). Personally, I'm a big fan of Coach Weis and now recognize the wisdom of replacing Gill, but I will always appreciate the kind of quality human being Turner Gill was (and is).

Yes sir! It's just unfortunate that he isn't as good of coach as he was a player.

I am glad he is relishing this new opportunity at DB, but as a fan this frustrates the hell outa me... Shepherd averaged 17 yds per catch and had the most receiving TD's on the team last year, which some people would define that as a "big play threat" or at least the biggest threat we have... Its the same story with Christian Matthews... he is the best athlete on our football team behind only maybe pierson... he was a great receiver for us last year and he was always on the field, whether it was at receiver or running the wildcat... I understand our quarterback's aren't the greatest (understatement) but why take these talents off the field... these were 2 of the brightest spots on our team last yr.... ROCK CHALK

Different strokes for different folks I guess. The only thing that I could think of is that Weis' offense is much more complex than what most of us realize. For instance, we've all been wanting Josh Ford to get some reps @ wideout, and until now -- becuase he's learning more of the offense -- he hasn't gotten that chance.

Then, when Campo come's in, he see's a wideout without a lot of experience (perfect for molding another position), and a great deal of speed and thinks to himself, "I bet I could get him to be a lockdown defender." It's easy to say he's averaged nearly 17 yds per catch and that Weis should have kept him on offense, but honestly do you think he would have made a bigger impact at wideout or where he is now? Considering our QB woes so far this season, I would go with the latter. When I say the play live last week and saw #25 with Shepherd on his back not even a half step away from arguably the fastest wideout in the Big 12, I knew that the coaches made the right decision.

Please be patient, kufan10, and watch a see what unfolds in the next few seasons. My gut says you'll be happy you did.