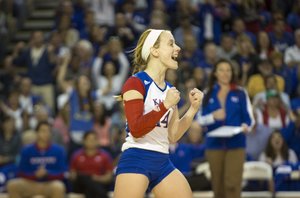 If Kansas University’s volleyball team felt as if it gave away Wednesday’s first set against archrival and 14th-ranked Kansas State, the Jayhawks sure made up for it in the next three.

After responding to the disappointment of letting two set points escape them in the opener, the 21st-ranked Jayhawks dominated Set 2, ground out Set 3 and closed out a convincing victory against the Wildcats, 26-28, 25-15, 28-26 and 25-20, at Horejsi Center.

“The way we lost the first set could’ve created a really down mood,” KU coach Ray Bechard said. “But for us to come right back and really get after ’em in the second set, I think, was critical.”

Critical was a good word to describe the play of junior middle blocker Caroline Jarmoc, who recorded her first double-double of the season (11 kills and 12 blocks) and once again joined the 200-kill, 100-block club. Jarmoc has now achieved the feat that only five other Jayhawks have in three straight seasons. No one ever has done it four years in a row.

She credited the excitement in the gym and the intensity of the rivalry for her big night.

“Once you get in it, you get in it,” said Jarmoc, a native Canadian who admitted she knew nothing about the Sunflower Showdown when she first got to town. “I just wanted to crush them tonight.”

Sophomores Sara McClinton (19 kills in 33 tries) and Chelsea Albers (7 kills in 13 tries) helped pace KU’s offense, four different Jayhawks finished with three or more blocks, and, as a team, the Jayhawks (18-3, 6-1) dominated at the net, finishing with 18 blocks to K-State’s five and a .271 attack percentage.

“We are a very physical team,” Albers said. “We’re gonna block balls and touch balls that a lot of other people would just give up on.”

Never was that more evident than in crunch time Wednesday. The Jayhawks were at their best during the waning moments of the final three sets. Senior Tayler Tolefree ended a tight third set with a huge stuff block, and Catherine Carmichael came up with a huge rejection in the fourth set to give KU breathing room at 21-19. From there, McClinton took over, recording kills on three of KU’s final four points to close out the match.

“I was like, ‘I want the ball,’” the 6-foot-2 outside hitter from Omaha, Neb., said. “I know my teammates need for me to have that mentality.”

After KU let a 15-10, fourth-set lead slip to one at 17-16, Bechard called timeout to calm his players down and emphasize the importance of finishing.

“In a fifth set, many times the volleyball gods can take over with a bounce here or a call there,” Bechard said. “Even though we’ve had some success with ’em, we prefer not to (go five) if we can get it over in four.”

Although Wednesday’s victory merely went down as the latest bright moment in a season full of highlights, Bechard talked in detail after the match about all that it represented.

“We talked about it a little bit,” Bechard said. “There’s this ranking, there’s RPI (KU entered the night 13th, while K-State was ninth), there’s all this stuff, and the girls just looked back at us and said, ‘That’s what we feel like we should be doing.’ I think they get a sense that they believe and now we’ve beaten some good teams.”

He continued: “I think (tonight was) a big match because they’re a really good team. In the standings it just gives you one more win, but, from a different perspective, regionally, I think it means a little bit more.”

Good! Tired of seeing KSU kick our butts in everything except men's BB. Zenger is getting things done here, looks like.

It's about creating an environment that brings in the best coaches and players that lead to winning unlike the former AD who was all about creating money at the cost of winning.

Zenger didn't have anything to do with the success of the volleyball team other than maybe giving them some pep speeches. This season is the result of a team that's played together for a few seasons now that has learned how to win after having losing a lot of close matches over the past two years.

Zenger didn't hire this coach, nor did he recruit any of the players. I love Zenger, but he had nothing to do with this.

Maybe Zenger lit a fire under Ray's butt and let him know that winning matters.

Yep! Thank you for making my point.

Zenger has has made it clear to all departments and all coaches that he expects them to win and anything less is unacceptable. He's already dumped a couple coaches who weren't getting that job done. It's not unrealistic to assume that Bechard's program was getting a hard look considering Bechard's history of under-achieving, fading once the conference season begins, going meekly in the 5th set, etc.

Great job girls! Keep it up and you'll have a great seed for the NCAA Tournament!

Great seeing a pack crowd tonight cheering on the Jayhawks. I was at the game and KU really looked like the more dominant team overall. The girls have really made huge improvements from last year to now. HUGE win for KU. Always nice beating ksu too. Rock Chalk!!

(!?!?!?.....is designation in chess...it implies a very sharp edge.....very committed.....like when Cortez scuttled his ships, when he was concerned about the commitment of his soldiers, .... like when HCCW had the football team sing the alma mater with fans after the football game, like the final bet .....ALL IN FOR KUVB )

This is really good work ladies. I'm proud of you. I appreciate the hard work you're putting in.

A great win tonight ladies,keep up the great work on the court.

Bechard has the talent and he's getting the job done! This is fun!

Another one bites the dust !

Fantastic win, but I am wondering how the libero did!

Nice. Great to see this season shaping up to be what we all that our women's program could and should be. Congratulations to the coach and the players.

riverdrifter, again shows he is not with it, as his comments are totally stupid.

What part of his comments do you take issue with? I think he was pretty much correct in his remarks.

"wildjayhawk" takes issue with it because he's a KSU troll in disguise.

Gotcha, thanks for the heads-up, bad_dog.

This is very cool.

Very awesome to see the hardwork and effort these girls have put in over the past couple of seasons pay off big time this year. What happened to the KSuck trolls from the football game that were talking crap about this match, come back so we can laugh at you. Here kitty kitty kitty!

very fun to see.....we've raised our level of competing this year...and it's paying off. we're so much better defensively....we dominated the lady kitties with blocks at the net, and it was the difference in the match.

congrats to Coach Ray, his staff and the players....just keep 'er goin.

Most dope. It is genuinely hard to beat the intensity, anxiety, and excitement of a good volleyball game. I'll take a close men's bball game as number 1 but volleyball is CLOSE behind. Just ask Withey. Wish I could have been there. Keep it up!!