A whopping nine Kansas University basketball newcomers will be playing before a crowd in Allen Fieldhouse for the first time tonight. 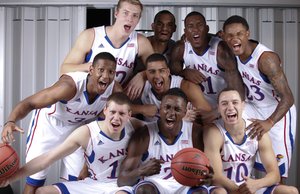 It’s a party of nine that impressed 10th-year KU coach Bill Self on his team’s summertime tour of Switzerland and France.

“We’ve got a good group of freshmen ... you’ve got to throw Ben (McLemore) and Jamari (Traylor) in there, too,” Self said of red-shirts ineligible to participate in Late Night a year ago. “It is a young group, but I think a pretty talented group. I think it can go down three or four years from now as one of our better recruiting classes. But it still remains to be seen how soon they’ll be able to deliver. I’m hopeful soon because we are going to need them to play,” Self added.

McLemore and Traylor were ranked Nos. 17 and 141 in the Class of 2011, while Manning and Self are the unrated, non-scholarship walk-ons joining the program.

“Bill Self has put together a solid five-man class with the five-star, four-time state champion and player of the year Ellis leading the charge,” Rivals.com wrote in announcing its final team rankings last April.

“White, a four-star wing, is an excellent shooter while Adams is a physical, slashing, four-star combo guard. A pair of physical big men, Peters and Lucas, round out the (10th rated) class,” Rivals.com assessed.

Here’s a quick look at the Jayhawk newcomers. ...

“Perry has been highly-touted, but a pleasant surprise. He can score. This is what this team needs,” Self said.

“Yes, Andrew can shoot. We need that losing Conner (Teahan),” Self said. “Andrew is going to be a good player He’s still figuring things out. He is a tall guard ... 6-6 guys who can shoot it ... they are fun to have.”

“I think Rio has a lot of talent. He just has to figure it out,” Self said of the state of Washington’s AP Player of the Year. “He’s a really good athlete. I think he’ll give us an element of toughness, too. He’s capable of being an elite guard.”

“He’s a legit 6-9, 240-pound high school senior that can really shoot the basketball,” Self said. “He’s big and rugged. We can play him to where he’s big enough to defend the five (post) or skilled enough to play in at the four (power forward).”

“I think there’s nine of us, a ton of freshmen,” he said. “We are extremely underrated first of all, actually very underrated. I think we’re going to surprise a lot of people.”

“Landen has been a pleasant surprise,” Self said. “He can shoot it. He can pass it. He understands the game like the big guys we’ve had here in the past, such as Sasha (Kaun) and Darnell (Jackson) that really have a great feel on how to play.”

Of college ball, Lucas said: “The biggest adjustment will be the size difference. Everyone is big. Everyone is quick. You can usually find a weakness in a big in high school. Everyone is talented around here. Getting adjusted to the tempo ... that’ll eventually come with just playing. It’ll take a little time, but I’ll get it.”

Ben McLemore, 6-5, 185, St. Louis: McLemore had to sit out last season after being deemed a partial qualifier by the NCAA.

McLemore said he loves the incoming recruiting class. “I think the freshmen are great. All are great athletes, great players they will fit in and play a big role for us,” McLemore said. “Coming in as freshmen, they show a lot of skill work. They’re coming in strong and really wanting to get out there and play.”

Jamari Traylor, 6-8, 215, Chicago: Traylor is a bruising power forward, who is known as a great rebounder. He also was ineligible a year ago.

“Jamari’s raw, raw, raw, but he’s like a shorter version of Thomas (Robinson) when he got here,” Self said. “He’s maybe more explosive than Thomas. He doesn’t have the physical strength Thomas has, but he is a warrior.”

Evan Manning, 6-3, 170, Lawrence; Tyler Self, 6-2, 165, Lawrence: Manning, a Free State High graduate who went to New Hampton Prep last year, is son of former KU great Danny Manning, who happens to be leading scorer and rebounder in school history. Self, another Firebird, is son of KU coach Bill Self.

“Evan has played well. Knowing the kid ever since we moved back here (10 years ago) ... he and Tyler have been buddies. They’re great kids. Tyler ... I’m biased. I think it’ll be so much fun being able to hang out with my son on a daily basis. Those two are nothing but positive. Niko, another coach’s son is also in the program,” he added of junior Niko Roberts, son of KU assistant Norm Roberts. “If anything, if we were able to take an IQ basketball test compared to others out there, hopefully those three would fare very well.”

" I think he'll be the best defender we've ever had ".

Yeah, my jaw kind of dropped when I read that. It's pretty rare that Self will go out on a limb and say things like that about someone who hasn't played a single game in the fieldhouse yet.

Traylor has grown a KU inch to 6-8. Self really likes Traylor, but the code word is raw. Traylor is clearly being groomed as the designated enforcer, but Self is using raw as an excuse for playing him behind Ellis. Ellis has to play to get some scoring in the paint. Traylor can't be totally raw, because: a) Self considered starting him last season; and b) he has worked as a red shirt against TRob for half a season. Best guess: Self is sand bagging early season opponents on Traylor's role. Traylor and Wesley get to committee the designated forearm smasher role pioneered by TRob his sophomore season.

If Withey has not added at least two, go-to offensive moves this team is in trouble. I didn't see him regularly finish around the rim at all last year. If he can utilize a few post moves and get the D to double down, he has a nice touch pass that he will be able to get to Perry for easy buckets.

And vice versa, if Perry can score well down low, as I understand he can, hopefully he is able to pass out of a double team effectively. TRob struggled with that for a while last year, but I have a feeling Perry has nice touch on shots and passes.

EJ is going to get his trifectas back above 40% this year.

But EJ is also the only one I have confidence in to successfully get the low post passes in without turnovers.

Trav or AW3 are going to also need to shoot near 40% from trey to give Perry and Jeff some space.

Trav is a good teammate, but I hope he can become consistently aggressive this year because we have not seen that in the past.

I don't expect much out of Naadir, and Anrio could take his minutes.

My guess is that Peters is done for the year, but that could end up being a blessing for team chemistry/reps/development for other core players.

Curiously awaiting proof that Self has found better defenders than BRush and Chalmers were.

This is going to be fun team come March. I think BMac is going to be a heck of a player. Self has been very complimentary of him, which is unusual. RCJH!

Should I post something or just wait for TexasHawk44's counterstrike?????

I think you need a 4th line in this picture kD. Looking at the heels of the players, particularly Ellis and McLemore and they're standing at least 2-3 inches behind Wesley and Garrett making them look several inches shorter. Also look how far forward Tharpe is standing on the left end, I'm guessing he's getting a couple of inches from that.

It looks like Wesley is on his tip-toes. Funny thinking kids do that in college. I thought it was just in Jr. High and High School.

The really scarey thing here is that the tallest player is only about a half inch tall on my screen. Is this really the KU team, or is it a photo of the Whoville State University team. I'm not sure we can be competitive with a team this size. :-)

Seriously, beyond just Tharpe, I would also add that there could be some distortion stemming from the right end of the line seeming to be closer to the camera than the left end of the line.

Nevertheless, I believe you have here this season's equivalent of the Zapruder film.

Hence, my big question is: was there a second, or a third cameraman in the Field House, as you took this photo? Was it a photographic conspiracy, or a lone photographer? As we look at this picture, we see the line skewed forward and to the left, back and to the right.

Was this an executive action?

Man, we've been reading about Mclemore and Traylor for so long it seems like they should be described as returning veterans instead of incoming players. Looking forward to watching this group develop into new Jayhawk legends.

It would seem that we:

We lament the recruiting misses. Yet, if I'm a wannabe OAD, and I look at the list of freshmen and the two redshirts, maybe I'm a bit concerned with the PT required to fulfill my fantasy. That is a great crowd when you step back and look at the whole picture. I think we need Zack Peters this year to bang and get some hard fouls. Jeff is no banger and never will be. I haven't seen Ellis, but he sounds finesse like. Traylor is a project but may get to go in and bang, and protect Jeff. Self likes to have enforcers, although he never uses the term. For us KU basketball freaks, this team and what Self does with them will give us blog fodder out of our minds. If you listen to him carefully, I think he is really excited. The guy loves to coach and he loves to show off what he can do to take a season to build a team. Assuming everyone stays at least through next year, add the next class, find a big, and solve the point, we could be on the verge of something scary in two years.

P. S. Everyone forgets about Kevin Young. Good luck stealing time keeping him off of the court.

Agree about fodder material. Though that's true every year, isn't it? Anyway, I agree and while I hope your questions are solved internally, a couple knockout recruits would be nice.

And yes, Kevin Young does not look like he should be doing near the things he does. Plays like his hair is on fire.