Kansas University junior runner Natalie Becker made her season debut for the KU women’s cross country team and broke away from the pack for first place at the Haskell Invitational on Saturday at Haskell Indian Nations University. 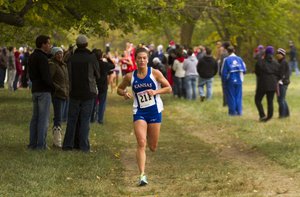 Kansas fourth-year junior Natalie Becker gets some separation as she competes in the Haskell Invitational Saturday, Oct. 6, 2012, at HINU.

Becker, who sat out the Jayhawks’ other meets due to an injury, finished the 5K in 18:25. Three other Jayhawks — Kelli McKenna (ninth, 19:19), Kennedy Schneider (10th, 19:28) and Jasmine Edwards (19th, 19:57) — also competed as individuals. Haskell’s Talisa Budder earned the top time for the host squad in 18:40 for fourth place. The HINU women finished fifth in the team standings.

The KU men’s and women’s teams will travel to the Wisconsin adidas Invitational on Friday in Madison, Wis.

From the enlarged picture, it looks like she ran/won in training flats. The Haskell Invite isn't exactly an elite meet, but it is still very encouraging to come back fom the injury and win in flats. Will the performance get her onto the traveling squad for Wiscy?