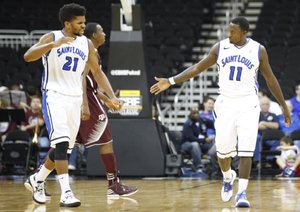 Saint Louis players Dwayne Evans, left, and Mike McCall Jr. slap hands during a run by the Billikens in the second half of the CBE Classic, Monday, Nov. 19, 2012, at the Sprint Center in Kansas City, Mo.

Kansas City, Mo. — Bill Self had hoped to visit with, and maybe even coach against, popular Saint Louis University mentor Rick Majerus during this week’s CBE Hall of Fame Classic in Sprint Center.

“He’s been really good to me,” Self said of Majerus, whose serious health problems resulted in Friday’s announcement that the 64-year-old legend will not return to coach Billiken basketball, where he compiled a 95-69 record in five seasons, including last year’s run to the NCAA Tournament Sweet 16.

“I think everybody in coaching is concerned about his well-being,” Self added.

According to the St. Louis Post-Dispatch, Majerus missed six games at SLU over his five-year tenure — once because of food poisoning; once when he took the wrong combination of medicine, was feeling dizzy and was taken to the hospital for evaluation; three times because of a leg infection; and another when his girlfriend was in an automobile accident.

Prior to coming to SLU, Majerus had seven heart bypasses. He had a stint put in two summers ago.

“Coach Majerus is not only a colleague, but a dear friend, so this is a difficult time,” Crews said when it was announced Majerus would miss the season. “We are fortunate to have a group of outstanding young men. This past year, they have been a delight to work with, and our staff is excited to serve them. Hopefully, our fans will rally behind this team.”

The Billikens have started the season without standout guard Kwamain Mitchell, who had foot surgery in mid October. Also, Cory Remekun, a 6-8 senior, missed the first two games because of injury. He returned to start and score 12 points off 5-of-6 shooting versus A&M.

Blue Ribbon Yearbook predicted the Billikens, who had just 12 turnovers versus A&M to the Aggies’ 19, would vie for the Atlantic-10 title and could claim a top-five seed in the NCAAs. Saint Louis was picked second in the A-10 behind Temple in the preseason coaches poll.

He didn't have a stint put in, he had a stent put in. Spell check and autocorrect are evil.

Hey awesome job dude! Way to edit! You proud of yourself or what?

Hey, lighten up. He did it in a lighthearted way. Your reply, on the other hand...

"For Rick Majerus: a King Among Coaches, Not an Emperor of Ice Cream"

Majerus got it. He is/was the real deal. One of the great coaches of his generation cut short by too much DQ, and too many cheese burgers.

If Rick's plight isn't enough to make persons turn on junk food the way they finally turned on cancer sticks, I don't know what could do it.

There needs to be a Rick Majerus Foundation to fight eating disorders related to the sweet tooth and fast food.

Society and the game cannot afford to lose another great coach to this problem so young. This is not an obit to Rick. I hope he can find a way to fight through this and live long and resume being a talking head. This is an obit for Rick the Coach. Rick the guy the game needed. Rick the guy that found a way to keep the game pure. Not nice. Not soft. Not easy. But pure.

Maj was a vital link in an important coaching legacy.

The other strain of McGuire Ball got hybridized by Dean Smith and Larry Brown.

But don't kid yourselves. When LB came to Lawrence, he was bringing in his genes and his game as much Frank McGuire, as Dean's hybrid variety.

You can take the kid out of New Yawk, but you can't take the New Yawk outta da kid.

KU has been touched deeply by New Yawk City ball, by McGuire ball. It lost an NC to UNC in '57 to it.

It got reborn with a serious infusion of it when LB came.

It got a very weak drip of it throughout the Roy Ball years.

And when this young, impressionable Okie schooled in Okie Ball by a father, then by Paul Hansen, and then by Iba himself, for brief moments, this young thick browed, broad shouldered, bum kneed 2 guard got a look at the inside of McGuire Ball via LB, it changed the Okie Baller forever.

Oddly enough, out in Lawrence, Kansas on the Kaw, Bill Self is the reigning master and caretaker now of these two traditions: Okie Ball and McGuire Ball.

But there is no mistaking who is the purest shaman of them all regarding McGuire Ball. None at all.

Not even LB himself is as pure as Rick "the human ice cream cone" Majerus.

The lineage is direct.

Frank to Al to Hank to Rick.

Talk to Rick Majerus, the human dairy king from Sheboygan Falls, Wisconsin, Mr. Cheese Head with a round ball, and you get pure, uncut, New Yawk City ball pumped through the unlike, sadly clogged, veins of one of the great, great coaches of our time.

You will never be forgotten among those that know the game, and from where it sprang.

Naismith founded a game and the seeds of it blew far and wide across America. The seeds blew into proper New England towns, and into prairie towns, and into tough dirty cities, and into share croppers shanties, and out on farms and into little company towns at the feet of the Big Rock Candy Mountains and into the little desert pueblos, and into fishing villages of the Pacific Coast, and all down the jazz and blues towns of the Big Easy and the Big Muddy and up the Ohio Valley. The seeds blew all over this continent. They blew up into Canada. They blew down into Tobacco Road and into the ship building towns and fishing villages all along the Atlantic and gulf coasts. The seeds blew every where. And the game grew up wild and fresh and beautiful no matter how hard the scrabble was, and no matter how brutal the factories were, and no matter how mean the streets were, and how segregated the country was. The seeds spread and they grew.

And one of the most important seeds of all blew into the boroughs of New Yawk. And it produced a kind of ball that has endured to this day.

And Rick Majerus shephereded it as wisely and as honorably and as skillfully as any one could have shepherded the game that that seed produced.

That he did it mostly in mayonaisse places doesn't lessen the purity of the game he coached.

That Utah team of his had to have made Frank and Al tip the Bushmills and crack wise about their fat kid from Sheboygan that got it better than most of the city kids.

Don't give up the fight, Big Rick, until you know its right.

But when you know, rest assured, that those who knew and loved the game recognized you for the special coach that you were and remain.