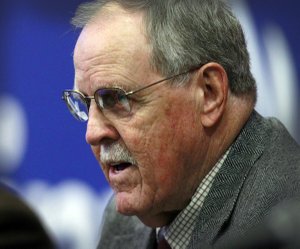 Why so long? Clyde is the only collegian to win the scoring title and lead his team to the NCAA championship.

Lovellette was inducted in 2006 in the founding class. Every year they honor a few HOFers with a more formal induction.

I believe the collegiate HOF has only been in existence for maybe 5 years or so. They're adding the "no brainers" fairly quickly. I believe Clyde has been in the Naismith HOF for quite awhile though.

" I don’t believe one man can win any ballgames. They can have a big impact, but the other four men that are with him, that’s where you develop team play, camaraderie and the real togetherness to win a ballgame.” --Clyde Lovellette, at induction to National Collegiate Basketball Hall of Fame

This is yet another example of the kind of quote that needs to be displayed in bronze placards on the walls of Allen Field House, in the entrance, on the walls downstairs, on the walls upstairs, everywhere, so that children see them for the first time, and so that parents remember them again and again. These truths spoken by great coaches and players need to be heeded by all those that come in the Phog, especially the future generations of KU students, KU fans, and Kansans. These quotes form one of the most potentially edifying aspects of the KU Basketball Legacy.

Video sheds a little light on how Mr. Lovellette was recruited to KU:

I am so grateful to you for posting this link. Thank you.

the very end, with the parade, and Lovellette almost getting choked up was priceless!!! All the love and craziness was very alive even in the early fifties.

Always glad to provide the assist. I always appreciate your posts, although I don't get to lurk here as much as I would like.

Guess the reply button did not work...