With no help from its shooting, KU grinds out 74-55 victory over Southeast Missouri 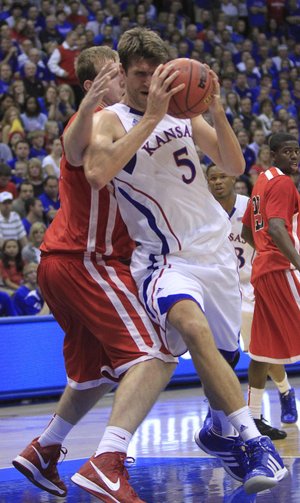 “We shot the heck out of it today in shooting practice, which was probably the kiss of death,” KU coach Bill Self said.

His Jayhawks, who couldn’t miss at shootaround Friday afternoon, made just two of 21 three-point tries in a workmanlike — some might say ugly — 74-55 regular-season opening victory over the Redhawks on Friday night.

“I think it’s also good you learn how to play when you don’t make shots. We’re becoming an expert on that the last couple games,” Self added.

The Jayhawks, who had 24 turnovers and hit 43.5 percent of their shots in a similarly unsightly 62-50 exhibition win over Washburn on Monday, suffered just 13 turnovers against SEMO.

Yet KU hit just 38.7 percent from the field — 9.5 percent from three. It tied for the sixth worst three-point shooting performance in school history, the lowest percentage since a 2-for-21 against VCU in the Elite Eight on March 27, 2011.

Naadir Tharpe (10 points, 28 minutes with Elijah Johnson in foul trouble) hit a three on KU’s third attempt of the night. The Jayhawks then bricked 17 straight threes before Andrew White III made one with just 16 seconds remaining.

“Miserable shooting and obviously the offense gets stagnant when that happens,” Self said. “When we started missing shots, it looked like we got real slow. We don’t put enough pressure on the defense by driving it, but it was 10 times better tonight than the other night. Our looks were good. You want Ben (McLemore, nine points, 0-3 from three, 12 boards) shooting shots. You want Naadir and Elijah (four points, 0-4 from three) jumping up and shooting shots. Travis (Releford, nine points, 3-11 shooting) is having a hard time finding the basket now. We know he can make a shot.

“You look a lot better ... even if you shoot it miserably and go 6-for-21 (from three), the game is a little bit different,” Self went on. “It wasn’t awful offensively. It was not good. Defensively I thought we were pretty good (holding SEMO to 29-percent shooting). We just missed shots.”

Self offered another stat of interest ... “Perry (Ellis, 15 points, eight boards in debut) made a 12-footer and no other person made anything other than a layup.”

Self’s frustrations at KU’s offensive performance were visible for all to see after McLemore missed a three with KU up, 36-22, with 16:30 remaining. Self slammed the advertising board next to the bench with an open hand, knocking a panel light out temporarily.

“If we can win and not make any shots, that’s a good sign obviously,” senior center Jeff Withey said after scoring 17 points with 12 rebounds and five blocks. “That’s not going to happen very often. It’s one of those nights for the guards. We’ll get in the gym and shoot and get ready for the game Tuesday (vs. Michigan State, 6 p.m., in Atlanta). It’s not going to happen too often we go 2-20,” Withey added.

Self said the Jayhawks will be facing a stern test Tuesday against 0-1 MSU, which lost to UConn, 66-62, on Friday.

“I don’t know Tom (Izzo, MSU coach) that well but they may practice in football pads and helmets tomorrow. Our guys want to practice with pillows,” Self cracked. “It may be a different mind-set. It’s going to be eye-opening experience. We may have to have a guy get punched in the mouth to really understand. They are going to hit us first if we’re not ready. We might as well get our guard up and get ready to go. It should make both teams better.”