A day after winning their home opener and two days after handing Smith the 200th victory of her career, the Jayhawks dropped the finale, 3-1, on Sunday at Arrocha Ballpark.

“It was big for us,” Smith said. “Obviously, it’s good to take three from a team, but you want two to win the series. The third game was a tough game, but I feel good about how we competed.” 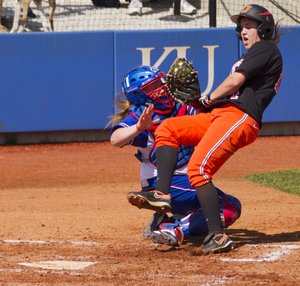 Though the conference season barely has begun, Smith looked at the three-game set with OSU (16-12 overall, 1-2 Big 12) as a watershed weekend.

After Kansas (22-6, 2-4) cruised through the nonconference season with a 20-2 record and a school-best 20-game winning streak, the Jayhawks ran into a buzzsaw last weekend in Columbia, Mo. Missouri swept the Jayhawks by a combined 24-0, including two games shortened by the mercy rule.

A series loss to OSU, Smith knew, could have been crippling to a team that struggled to win just two Big 12 games all of last season — and none at the friendly confines of Arrocha.

Just two series into this year’s league slate, the Jayhawks already are better off than last year.

“This weekend was very important,” Smith said. “In the Big 12, every team is ranked or receiving votes or was in the College World Series last year, so every team is good. We came into this weekend wanting to get a win. Getting two is huge.”

OSU, for the record, met the third of Smith’s criteria for a Big 12 team. The Cowgirls were one of four Big 12 teams in last year’s CWS.

And KU had a chance Sunday to sweep. The Jayhawks outhit OSU 8-7 but stranded nine runners.

Throw out Okie State’s two-run fourth — made possible by a tricky-but-catchable fly ball that instead dropped when the pursuing outfielders collided, resulting in two on and one out rather than one on and two down — and the teams were even-up.

“I don’t think (the loss) takes anything away from the weekend,” said KU first baseman Marissa Ingle, who had two of KU’s eight hits. “Coach always says, ‘Don’t give anything away. Make them earn it.’ We didn’t do that today. … But (the series win) was huge. Taking two of three is fantastic. We’ll take it. It was a lot of fun.”

Alicia Pille (10-4) took the loss. Making her second start and third appearance of the series, Pille allowed all three runs — though only one was earned — off five hits over four innings. Morgan Druhan threw zeros over three two-hit innings.

OSU took a 1-0 lead in the first, but KU responded when Liz Kocon drove in Ashley Newman with the tying score.

Newman collected her second hit of the game in the third, chasing OSU starter Simone Freeman. Kansas eventually loaded the bases, but reliever Kat Espinosa (9-5) worked out of the jam.

“We were getting runners on,” Smith said. “We just weren’t executing at the right times. I was happy with our ability to get people on, but we needed to come through in clutch situations, and we weren’t able to do that today.”

KU will travel for a doubleheader Tuesday at Missouri State, then travel this weekend to a three-game set at Oklahoma.