Kansas guard Tyshawn Taylor goes wild after a three by teammate Elijah Johnson, left, put the Jayhawks up by one for their first lead of the game against Purdue during the second half on Sunday, March 18, 2012 at CenturyLink Center in Omaha. 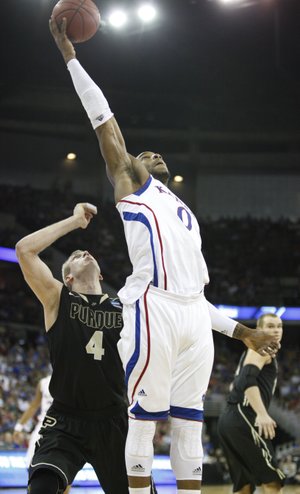 Kansas coach Bill Self talks to reporters following the Jayhawks' 63-60 victory over Purdue on March 18, 2012.

Teammate Elijah Johnson thrust his hands high in the air, celebrating with fans who were dancing in the aisles of CenturyLink Center after the final horn sounded in KU’s 63-60 NCAA Midwest Regional victory over Purdue on Sunday.

Two of the game’s biggest heroes then embraced before finally heading to the locker room following quick TV and radio interviews, their season still alive with a Sweet 16 date with North Carolina State on tap at 9:17 p.m. Friday in St Louis.

“We kept grinding and grinding and never gave up,” Taylor said. “You’ve got to trust your teammates. I trusted Elijah to knock that shot down, and he trusted me to go get that lob. That’s what we did. The trust we have in each other is the reason we won the game.”

“Money,” Johnson said, asked what he thought when he let the shot go. “I had a smirk on my face because I knew it was going down.”

Johnson lofted a lob to Taylor, who dunked at :59.9 to slice the gap to one.

“I was throwing that lob whether I threw it off the backboard or not,” Johnson said. “That’s our game.”

“We’ve got that play so many times, me throwing it to him, him throwing it to me. He trusts me, and I went and got it for him,” the 6-foot-3 skywalking Taylor said.

Still down one, KU benefited from the Taylor-Johnson combo once again. Taylor knocked the ball from senior guard Lewis Jackson with 27 seconds to play. Johnson secured the steal and raced in for a layup at :23 to give KU a 61-60 lead.

“It’s not the biggest layup of my life,” Johnson said with a smile, “but it’s one of them.”

Still, Purdue had a chance to win. Hummel, who was guarded by Thomas Robinson, hoisted a three with about eight seconds left, with Robinson rebounding and passing to Taylor, who instead of trying to run the clock out dunked at :03 to give KU the 63-60 lead.

Up three, KU sweated out one final possession. Ryne Smith missed a three that banked off the backboard — but did hit the rim — at the buzzer, assuring KU’s victory.

“It was pure joy,” KU junior Robinson said after the shot missed and KU won. “I felt pride — pride in my teammates, pride in the fans who were here, the coaches, everybody.”

“It was awesome. We get to live another day,” noted center Jeff Withey, who scored just four points with two rebounds while playing only 15 minutes because of match-up problems against a Purdue team that hit eight of 18 threes, seven of 10 the first half.

KU coach Bill Self used a triangle-and-two defense with smaller players Johnson and Conner Teahan doing the chasing on Hummel and either D.J. Byrd or Smith the second half.

“We were all speechless. To come back and win like that and make plays at the end takes so much toughness,” Withey added. “We played defense the last 10 minutes. That’s why we won the game.”

“How we won this game is who we are: getting stops and making plays,” Self said.

He said the game reminded him of KU’s overtime victory over Missouri in which KU battled back from a 19-point deficit. The players, too, noticed the similarities.

“My message to the team at halftime was, ‘We’ve been here before. Don’t get discouraged,’” Taylor said. “Just keep playing. It’s a long game, a game of runs. Coach always says that.”

Hummel brought back bad memories of former Purdue great Glenn Robinson in the 1994 NCAA Tournament (he had 44 in a victory over KU) by scoring 22 in the first half and lifting Purdue to a 36-30 lead at the break.

Hummel hit seven of eight shots before intermission. He knocked down five threes in six tries. He also made three of five free throws and had six rebounds in 18 minutes.

Robinson had just three points off 1-of-5 shooting with eight boards in 17 first-half minutes. Withey, who had some problems defensively early, did not score with no rebounds in nine minutes. Taylor had just four points off 1-for-5 shooting in 16 minutes.

KU had just four assists against four turnovers in the entire half.

Seven players scored for KU in the first half, with Travis Releford leading the way with eight points. Purdue hit seven of 10 threes in the half to KU’s four of 16.