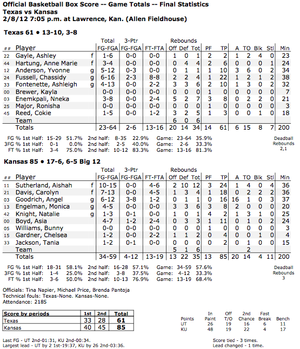 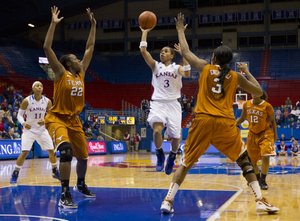 Much like the first time these two met back in January, Kansas University’s women’s basketball team built a second-half lead of 20-plus points against Texas on Wednesday night. This time, there was no UT comeback.

Instead, the Jayhawks slammed their foot on the gas pedal and pulled away from the Longhorns for a 85-61 victory at Allen Fieldhouse. The victory snapped a three-game losing streak and pushed KU to 17-6 overall and 6-5 in Big 12 Conference play.

“We got off to a great start,” KU coach Bonnie Henrickson said. “And we fought and competed and battled. And, boy, in this league, you need that every night.”

There were a bunch of reasons for Wednesday’s blowout and plenty of highlights from the victory. Junior point guard Angel Goodrich finished with an Allen Fieldhouse-record 16 assists and added 16 points and just one turnover. Junior forward Carolyn Davis added 18 points on 7-of-13 shooting.

Both paled to the strong showing of senior forward Aishah Sutherland and the crucial minutes turned in by freshman Asia Boyd.

Sutherland, who finished with game-highs of 24 points and 12 rebounds, scored 10 of KU’s first 18 points. She nearly matched that output during a second-half stretch in which she scored eight of 14 for the Jayhawks and helped KU push its lead to as many as 26 points (79-53).

“I just came in thinking, ‘Attack them,’” Sutherland said. “And that’s what I did. I saw open opportunities and took them.”

Added Henrickson: “It’s never been a talent issue with Aishah but a consistency thing. She was really, really good tonight, and I wouldn’t have predicted that because I thought she was a little flat in warm-ups.”

The way Sutherland described it, flat equaled dialed in.

“I wasn’t as hyper as I usually am before games, jumping around, dancing and stuff,” Sutherland said. “So she probably thought I was a little flat, but I was just more focused.”

While Goodrich was breaking records and Sutherland was scoring in bunches, Boyd was turning in the best game of her young career. Turns out, that was the product of some off-the-court attention, as Henrickson and Boyd recently met to talk about what she could do to play more.

“This was the best analogy I could give her,” Henrickson said. “‘I know you want to play like Angel Goodrich. Play like (KU freshman starter) Natalie Knight.’ I just appreciate the fact that the kid would text me and ask me what she could do to get on the floor. That’s not the first time, it’s just the most recent time.”

“I was just trying to contribute to the team and make sure we got the win,” she said. “Coach Bonnie had a lot of confidence in me tonight. I believed in what she was saying, and she believed in what I was doing, so it just worked out well.”

Other than a sloppy stretch at the end of the first half that allowed Texas to cut KU’s double-digit lead to seven at halftime, the Jayhawks dominated all night. They opened with a 22-8 run that set the tone and reclaimed control with a 19-5 run early in the second half. The second spurt turned a three-point lead at 18:20 into a 17-point lead (61-44) seven minutes later, and the Jayhawks made it clear they were not interested in another barn-burner.

“We didn’t need it to be a re-run of another game, where they come back,” Sutherland said. “We have worked hard, and we knew we just needed to stay consistent and not let up.”

The Jayhawks will travel to Kansas State at noon Sunday for a rematch with the Wildcats, who topped Kansas, 63-57, in early January in Lawrence.

This brings us to the independent clause "coachingexperience" This clause contains an intentional spelling error. It was a deliberate attempt to bastardize "couchingexperience" in reference to the OPs love for laying on the couch and shouting insults at the TV everytime Coach Turner Gill would come on.

The OP created this account with a deliberate typo to save him much wrath for the future when West Virginia joins the Big 12. As we all know, they have a proud tradition of burning couches after every win. Imagine what they would do if they found a couch with a Killer Whale. That could get seriously ugly.

We are still investigating that dependent clause "ahperse".

A win in Manhattan would be sweet. Take it to them.

Yeah no matter what your views on women's basketball is, 16 assists is a great game. Good job Angel!

Another very impressive win ladies!! Congratulations to the team and coaches.

Hat's off! The team is putting the pieces together nicely. Keep it up, ladies.

They play at 7pm on Sunday.

My bad. I was just going off of the KUSports.com time.

Great win ladies!! There is absolutely no reason that a team this talented should be losing to kstate. I would love to see us pull off a much needed win!

Great win. We need this one in Manhattan Sunday. We let K-State beat us here in Lawrence.

Nice one ladies. Magic number is down to 3.

Angel you are the key. Two good wheels, experience and all the tools at your disposal. Don't stop. Don't look back. Stab it and steer, it's almost March.

This victory was for all the naysayers !! This team is going to show the progress made by the program. 20 + wins are coming and the NCAA bid will follow !!! This year is about turning the corner and moving up,up,up..............

When HCBH have a decent pre-season schedule and not play 25 weaker programs (being sarcastic) and beat conference teams without the other team playing like poo poo (putting it kindly) I will be impressed. KU was in 2nd stay in 2nd continue to beat teams that give a little competion then I would be the 1st to say we are turning the corner and YOUR favorite Coach is doing something. Otherwise, I guess people are so use to losing that they will take a Win anyway they can. I expect more from KU athletics. It should not take 8 years to almost slip into the tournament due to teams rebuilding this year. (we have not made it in yet). I am going to say it again & again these ladies deserve better. I am sure I will be here next year for the up, up, up and someone please have a net to catch me when it crashes! lol

Way to go, ladies!! We love seeing you play and do so well.

“‘I know you want to play like Angel Goodrich. Play like (KU freshman starter) Natalie Knight." ???? I'm sorry since I have not been "drinking the koolaid" could someone explain to me what HCBH meant by that comment. It didn't sound flattering to the freshman at all. JR87 Jayhawk care to chime in on this one?

I'm not JR87, but I interpreted that as HCBH saying that Boyd was trying to do too much too soon, and that she'd get more PT if she played within herself and grew into the college game like Knight has done.

Either way, it was a big game for Boyd, who we needed to step up since Harper has a concussion according to the UDK.

Thank you for your perspective, Phillbert.

Oh and our prayers go out to Cece Harper and her family. CeCe is a great young lady and an awesome player. Concussions are serious business. Here's to a full recovery. We need her on the court.

Nothing negative against Knight. If HCBH want more Knights then that is the type of players she need to recruit. Not Angel's. It is very true that freshmen have to learn to make the adjustments to the next level from high school. It is a BIG adjustment when a athlete is use to carrying a team and now she is playing with other athletes who can play as well. Again, that comes from a good coach to help the player(s) to make that transition and develop. Boyd could possibly contribute alot if given the opportunity. Talent is being waisted on the bench. This team is not that GREAT to where EVERYONE cannot contribute. How is any player going to learn sitting on the bench? We are not looking and talking about the top notch programs where you wait your turn until upper classmen graduate. Before CeCe was hurt why wasn't she starting and playing more? Still not understanding why Knight is starting and playing just as many minutes as the upper classmen when I attend the games and read final stats?

Sounds a LOT like conversations that FHOF Coach Self had with both the Morrii and Travis when they were freshmen. Basically, "The team doesn't need you to be the flashy leader (yet). The team needs you to do all the things (that are much less noticed in the box scores) that I've been talking to you about in practice. Things like boxing out, help D, getting your hands up, taking charges, ... Those are the things that will lead to minutes for you and even points along the way."

Sunday's game is on national TV, do your thing girls and get some payback. 12pm central time on FSN.