Kansas' Brianne Riley gets turned upside down as she is unable to make a dig during Kansas' second round NCAA tournament game against Wichita State, Saturday, Dec. 1, 2012 in Allen Fieldhouse. The Jayhawks fell, 3-1, and with the loss their season ended. 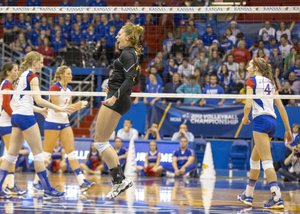 “You can probably tell by what I look like now ... you put so much work into something, it’s hard when it ends so quickly,” Jarmoc said of the second-round setback that ended KU’s season at 26-7. Wichita State, which advances to a Dec. 7 Sweet 16 contest against USC in Austin, Texas, improved to 24-9.

“All of us are so close. We had such a great season, we don’t want it to end. Bri (Brianne Riley) even said in the locker room she wanted to practice on Monday. It’s just something hard to accept,” Jarmoc added.

“The key stat ... they passed the ball to their setter better than we did,” KU coach Ray Bechard said. “Their offense was more in tune than ours. It’s disappointing you don’t play at your best when you need to, but your opponent has a lot to do with that. We’re still extremely proud of the season we had and these young ladies.”

Technically speaking ... “We didn’t do one skill well enough tonight. That’s first contact when they were serving. Our setter didn’t have enough options. We’ve got to get the ball to Jarmoc (10 kills) and Tolefree (Tayler, seven kills) like we have all year. Jarmoc’s having an All-American year, and we just didn’t put her in a good situation tonight to have an All-American night.”

Sara McClinton and Catherine Carmichael had 18 and 13 kills respectively to lead the Jayhawks.

Ashley Andrade, Elizabeth Field, Emily Adney and Ashlyn Driscoll had 18, 13, 11 and 10 kills for WSU, which advances to the Sweet 16 for first time in school history. KU also was trying to reach that destination for the first time.

“They were tough on our passers, hitters making good decisions, aggressive decisions,” Tolefree said. “They were coming after us.”

WSU coach Chris Lamb said the Shockers of the Missouri Valley Conference embraced their role as a mid-major school that beat SEC and Big 12 programs in successive nights.

“Our kind of little motto lately is, ‘We’re great against strangers,’” Lamb said, seated in an interview room with three Shocker players still wiping away tears of joy a good 20 minutes after the match. “These guys love to play the strangers. The (USC) Trojans are going to show up. We’re going to show up. I have no problem saying we’re playing with house’s money.

The Jayhawks lose just one player — Lawrence native Tolefree — off this year’s team.

“I’d like to thank this group right here and the University of Kansas for taking us on the most enjoyable ride we’ve had in the history of Kansas volleyball,” Bechard said. “As we know around here, the NCAA Tournament comes to an abrupt end when you don’t play as well as you would have liked. It’s tough in that locker room when you know you’ll be around this group for the last time. There will be a point in time we understand many of the things we got accomplished this year. That’s probably not going to be for the next few days.”

Notes: KU officials indicated the two-day event drew 8,029 fans, second most of any of the 16 sites (behind Nebraska) for first- and second-round matches. ... There were 28 ties and 10 lead changes. ... WSU ended KU's five-match winning streak. ... KU fell to 1-5 when trailing 2-1 after three sets. ... KU is 3-4 all-time in the NCAA Tournament. ... KU leads the all-time series vs. WSU, 39-13. The two teams had last met in 2002. ... WSU junior Chelsy Feekin set the school record for assists in an NCAA Tournament, posting 102 in the two matches. ... Junior Brianne Riley finished with 23 digs, marking the 15th time this season she has posted 20 or more digs in a match. ... Riley collected 39 digs over the two matches, which is second-best in KU history in an NCAA Tournament. She only trails Jill Dorsey (53). ... Erin McNorton’s 89 combined assists was the third-best total by a Jayhawk in one year of the NCAA Tournament. .... McClinton finished with a combined 34 kills, which is tied for the third-best in Kansas history in an NCAA Tournament with Jana Correa in 2003.

Can't be there, so this is great to see. One down, two to go!

KU is getting spanked in the second set, about to be 1-1. Here's the link to the live feed, from NCAA.com:

Dang. That's it. The good news is that we'll have a lot of seniors on next year's team.

Congrats to Wichita State. This was an entertaining match, and WSU was the better team tonight.

Let's be real, this is a disappointment. The number 11 overall seed, losing to an in-state school no less. Great season by KU, but they needed more. Bechard probably saved his job with this year's performance, and they return most key players next year, so they should be in good shape. But, what a bummer of a way to end the season.

Zenger should raise the bar and terminate him. Now.

Yes, the Big 12 Coach of the Year should be fired. Good lord that is stupid.

WSU wins it. Missed the final.

Congrats to WSU, they were indeed the better team tonight. Hopefully next year the Hawks can capitalize on their seasoned players and make a much deeper run.

As most of us have discovered, the pain that comes with an unexpected end of an athletic competition is temporarily devastating - and for the moment, words just can't help. But fortunately, with time, the memories of the joy, the excitement, and the results you achieved this season, will be what you recall as you look forward to next season; a continuation of this years success. And, of course, you will always have the memories of what it feels like to have been a member of this team and the unique bonds you made with each of your teammates during this great season. WELL DONE!!!!

KU has 3 seniors, Morgan Boub, Sylvia Bullock and Tayler Tolefree. Sylvia was a transfer who didn't play much, but Morgan Boub was a starter and defense specialist. Taylor is from Lawrence and was also a starter, but KU is losing more than just one player from this year team. Great season Jayhawks.

Not sure who at LJW posted the link to the live stream. We enjoyed watching despite the outcome. Great season! RCJH

I checked some other sites to see the size of crowds in attendance. First one was Lincoln where they reported 2 sell-out's: Thursday 4,182 and Friday 4,184. 8,200+ would seem to indicate KU's attendance was 2nd place, at best.

The announced attendance was higher than what LJW said. It was over 5,000 at the game when they announced it. I remember that much for sure.

"The Jayhawks fall to 26-8 overall, ending their five-game winning streak."

Maybe it's just me, but I think being consistent about small details, like, oh, a team's final record, is fairly important in journalism.

Great season, ladies. On to bigger and better things next year.

Congrats on a great season ladies, Very proud of you!