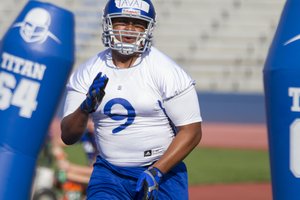 Kansas junior Jordan Tavai (No. 9) works out with the defensive linemen at practice on Wednesday, Aug. 22, 2012.

Since arriving in Kansas on Aug. 10 for his first day of practices, Jordan Tavai has been busy telling teammates about his heritage.

Tavai’s maternal grandmother came to the United States along with her siblings when she was 19 in hopes of getting a better education.

The Samoan part of Tavai’s family history has helped shape his football career.

It hasn’t taken long for the 6-foot-3, 290-pounder to get noticed during KU practices.

After just a few times going against Tavai, KU offensive lineman Aslam Sterling already knows that the junior’s strength is being able to use his hands well.

“He moves them around a lot,” Sterling said. “For an offensive lineman, a guy that moves his hands a lot, they try to trick you.”

Slapping hands down also can result in getting offensive linemen off-balance.

“My hands are faster than the offensive lineman’s,” Tavai said, “so I can knock them down faster, and I can get around them faster.”

For now, the challenge for Tavai is getting caught up after arriving at camp late following the delayed completion of his final junior-college class.

Not only is Tavai behind physically, he also is still learning KU’s defensive play calls.

The biggest issue now is getting the play call from the sideline, then getting into the right place in time. He attends extra meetings with KU defensive-line coach Buddy Wyatt to try to learn all the formations.

“I’m lining up kind of slowly, but I’m getting used to that,” Tavai said last week. “That’s where the mental part gets in. The faster I line up, the faster I react to seeing the offense.”

“I think Tavai is a fast-twitch guy,” KU defensive coordinator Dave Campo said. “I think he’s a guy that, especially inside ... some guys that aren’t great pass-rushers outside all of a sudden are really good inside, because you’re playing against more bulk but not quite as good of athletes in there.”

KU’s coaches have continued to move him around during practices.

Tavai, who also considered Texas Tech, Cal and Hawaii, received calls on the night before February signing day from schools trying to get him to change his commitment.

He stuck with KU because of Weis.

“He told me I was a little piece of this big puzzle,” Tavai said, “that could come together to fit to help turn this program around.”

Tavai’s goal is to be ready — both mentally and physically —for the team’s first game Sept. 1 against South Dakota State.

“I know his expectations are pretty high,” KU linebacker Schyler Miles said. “He’s depending on coming here and helping right away.”

Sorry, Great article on Tavai's Lineage, but... The title...

I see nothing wrong with the title but I bet your not happy unless your complaining.

Wayward has a point when he mentions that the title doesn't fit the bill. He is stating the obvious and there is nothing wrong with that and he isn't being Captain Bring Down by a long shot...just sayin

It wasn't Matt Tait writing it.

Not in anyway do I attempt to be argumentative, but I would like to hear what you think would be a good headline for this particular piece. Just curious.

This defensive line WILL be significantly better.

1. Opurum and Josh Williams will combine to be the most talented end duo we have had here since Keith and Ashley.

2. John Williams coming back is not talked about nearly enough. That guy was good! He could have made a big difference.

3. Tavaii, McKinny, and Stowers are all three guys that seem to be on the fast track to be solid contributors.

4. Never underestimate a position group that doesn't really lose anyone. The fact that guys like Agostinho, Young, and Goodman are back a year stronger and wiser could result in better production from a few of our returners.

5. Holsopple... Defensive line is so heavily dependent on strength and conditioning. Maybe more than any other position?

I don't get the argument on this board from people who are saying the defensive line will not improve. In college sports, keeping the same guy in the program for another year usually makes them better. They are at that age where they are usually more talented every year just by learning and lifting. Add in 3 JUCO kids, a talented transfer, return John Williams, and a great S/C coach and you are going to speed up the improvement process!

I agree with all of this except the order. I think Holsopple should be number 1 on the list.

How the hell is McKinney on the fast track ?

U seriously are comparing Opurum to Keith and Ashley ???

I'll shut up about the line starting now...and give it a few games...but yeah I have serious doubts about this position group.

First game doesn't count as on TV for us West Coasters (or any out-of-state fan). Watch for me on the live blog trolling for an internet feed....

What the article doesn't tell you is that, since he is wearing #9 on his jersey in the photo above, Jordan is our secret "Wildcat Quarterback."!!!

I appreciate Bangkok_ Jayhawk's enthusiasm, but realistically, any measure of improvement would be huge compared to last year's unit's performance. I think better coaching will make the difference.

I think the headline would have been vastly improved if they had simply added the word "Samoan" in front of heritage.

K-State has a Wildcat formation. We should run the WildHawk!

I don't know how the formation got it's name originally, but I first saw it in Miami with Ronnie Brown. They couldn't very well call it the Wild Dolphin formation, now could they? But I see no reason we should call anything Wildcat in our offensive playbook, unless it's Bloody Wildcat, or Kill Wildcat.

1998 Hugh Wiley, coach of the La Center High School Wildcats in the state of Washington is credited with the naming and invention of this formation which is really a modified version of the Wing-T. [Ain't Google great!!!]

How another idea. How about recruiting Usain Bolt for wideout.

Yeah, but I think Weis has hinted he might have something of a sort already in the works, and Michael Cummings is perfect for it.

He never once passed from it so you can't really call what he was doing the Wildcat. He had Christian Matthews and Michael Cummings, two very good running QBs, and he ran the same two guys through the same two holes every time.

I have been waiting for Matt to run is 30 for Thursday thing to ask him about HCCW and the likelyhood we run the "Jayhawk" formation. Not that we should ever pull Dayne out for an extended amount of time, but wanted to know if it was run at florida or notre dame. seems like we have a lot of WRs and RBs who could get some big plays with the way our o-line might shape up.

Can anyone tell me what channel the first football game wil be on in Wichita, KS. I have Cox Communications. I looked around for a bit online but did not find anything. I am assuming channel 3, 2003?

Good article from jayhawkslant.com with Buddy Wyatt talking about his D-line.

i hope we can get a good pipeline started for bringing in samoan players. they are some of the best across the defensive and offensive line positions.

All I know is ONE. MORE WEEK TILL FOOTBALL!