Of all the events that go into offseason conditioning, Kansas University co-captains Dayne Crist and Toben Opurum zeroed in on one number. 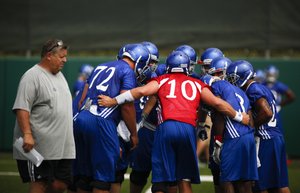 Forget faster sprint times, bigger biceps muscles or even added stamina. Crist and Opurum’s main focus this summer was to slice into their body fat percentage.

Boy, did it work.

When the summer conditioning program began, both Jayhawks had a body fat count of 13-14 percent. Thursday morning, when the team kicked off the 2012 season with a back-breaking conditioning test, both players registered right around 10 percent.

“I was mad that I didn’t crack nine,” said Crist, who added that the drop was the best of his life. “I got right to 10.2, or something like that. I said I wanted to come back in a couple days and do it, but they wouldn’t let me.”

Though generally pleased, Opurum also was a little disappointed by the number.

With poor conditioning plaguing the Jayhawks during the past couple of years, starting the season off in “fourth-quarter shape” provided a lift for this year’s new-look squad.

The general vibe was summed up best by defensive coordinator Dave Campo, who Thursday, got his first extended look at his new team since the end of spring practice.

“I think this football team is in shape,” Campo said. “And that’s all you can ask at this point.”

Added Opurum, when asked what it was like to hear that kind of talk from his coaches: “Well, that’s a start. The strength and conditioning staff, that’s the backbone of our team. The fact that our coaches are noticing it on the first day, I think that says a lot.”

Perhaps the most encouraging part about the current make-up of the Jayhawks’ roster is that these guys are not finished. Far from it, in fact. The work they put into the offseason not only toned muscles, shed fat and built confidence, but also became contagious. One by one, nearly all of the players who were in Lawrence this offseason replaced remote controls and fast-food runs with extra reps and unyielding effort.

“It started kind of slow,” Opurum said. “But you have to kind of show other guys and convince them that if one hour on these one or two extra days can help us become a better team, why would you not want to do it? After hearing and seeing that, we started filling up the weight room.”

What they did there was the more impressive part.

“There really were no gray areas,” senior offensive lineman Tanner Hawkinson said. “It was all black and white. We knew that if we bought in and did we were supposed to do we were going to put ourselves in position to win some games and surprise some people. So, really, it was just the motivation of knowing what could happen if we all gave 100 percent throughout the training process.”

It was, of course, a lot more detailed than that. Buying in helped, but so did the insanely meticulous workout plans and the head-to-toe emphasis on improving each day.

And, even though Opurum said the summer sessions had an almost mandatory feel to them, most of their time in the weight room was voluntary.

The whole thing is new to the Jayhawks, many of whom were still sitting the bench playing junior varsity football in high school the last time the Jayhawks started a season on such a high note.

While the early reports about Thursday’s conditioning tests seemed favorable — Damon Martin, Daymond Patterson, Tony Pierson, Tyler Patmon, D.J. Beshears, Victor Simmons and Chris Omigie all received praise for their performance from the team’s captains — Crist said he got the sense that the summer success was just the beginning and that the entire team recognized that it was now time to elevate yet again.

“It’s real,” Crist said. “This is the start of the season. It’s all business and it’s what you work all year for. All the outside stuff that you’re doing all year, it all leads to the football season. And it’s all irrelevant if you’re not taking care of business and winning games. We’re in season. It’s the most exciting time of the year.”

Game on. It's football season! Anticipation is rising....

I'm eager to see Omigie and how much better he has gotten. He's got great size and decent speed, but didn't seem to want to be on the field his first two years. Maybe he needed tough guys like Holsopple and Weis to guide him, considering he committed under Mangino.

If player development was his short coming at Notre Dame, Weis seems to be fixing the problem. Strength and conditioning is half of that battle. Holsopple... Great name and great coaching job!

250 pounds with 10% body fat? Sounds like Bangkok_Jayhawk. I used to be able to throw a pigskin a quarter mile.

I bet you could throw it over those mountains over there.

If coach just would have put me in 4th quarter, we would have took state. I would have went pro. Right about now I'd be sitting in my jacuzzi with my soul mate.

Love the confidence and commitment. Let's turn it up now that the season has started and focus on winning some games. I am pumped too!

"Let not him who girds on his armor boast like him who takes it off" - I Kings 20:11. I hope your prediction is right, but let's not get too far ahead of ourselves. Maybe give it a few games. :^)

That would be OK as long as we are not embarrased [Texas, Oklahoma, West Virginia], stay competitive [Okie State, Baylor, Texas Tech, TCU] and have a chance to win [SDSU, Rice, No.IL., KSU, ISU]

With the players doing their part, I sure hope the fans that either attend or can attend the games, do their part and support the team.......through the end of the game.
COME ON, let's do our part.

Man, the team is stoked....Maybe Dayne can play himself into a surprise Heisman candidate before the season is over.....It's not impossible sports fans

I'm very excited for this season. About mid season two seasons ago, I stopped going to the games. I still went to tailgate, but I didn't bother finding a ticket. This year, I'm pumped. I'm ready to make the trip from KC for the home games, do some 6 AM to gametime tailgates, and stumble around Lawrence after the games while finally crashing on one of the couches in the fraternity I had so much fun in. Hopefully I'll be THAT alumni that has the barf spray coming from his mouth while keeled over on a couch in all my clothes. It would be even more appropriate if I was missing my pants.

RCJHGKU. I hope this positive energy continues to build, and the rest of Jayhawk Nation adds a little to the pile. Pride, we need it again.

I can't believe I just laughed at that.

Best part of all this? It's keeping ahpersemycoachisaderp on the shelf. It's like I've died and gone to heaven.

Excellent point. By the way, were you able to escape the fires out your way unscathed? Sure hope so.

If no one else in the conference worked out and conditioned we should make a BCS game!

Reading this actually makes me even more mad about the Gill disaster. That sham of a program wasn't fair to the players. You can see already how important "attitude" is in the entire equation. What a waste.

So glad to see things getting turned around!

KUFan, for some reason, your posts concerning physical fitness always seem appropriate. Go figure. With that said, as long as I have been following the Hawks, I never recall any articles complaining that the players reporting to practice out of shape and complaining about an unsuccessful off--season conditioning progarm. It boils down to how it translates into the win column.

I will be travelling from St.Louis, MO. to see the opening game of the start of the Charlie Weis Era at the University of Kansas on September 1, 2012.....I challenge all of you to do the same!!!

Ha! My thought exactly. Since I live in Lawrence, Oakville's challenge presents a bit of a problem, but I'll see what I can do!

I have season tickets and live in Arkansas, I will be there every home game. I will also be there until the clock runs out. Show support!!! This is what the kids deserve . UNTIL THE CLOCK RUNS OUT, RCJ!!!!!

This is my 39th year as a season ticket holder and I have to say this is the most excited I have ever been for a season to start. I think there is a lot more talent there than we realize and with the right coaches, attitude and QB in place, we can do some good things! Our skill positions overall are good to very good and our D has to be so much better than the last two years just with the coaching!

I must say I've seen a lot of good teams over the years. Unfortunately, it has been rare that those good teams wore the Kansas uniform. Let's go "Hawks!

Let's keep the seats full the entire game! (and let's do away with the "Rip His F....ng Head Off" chant - it's an embarrassment!)

HAWKS1 - Congrats and thank you for being a long time season ticket holder.

And I whole-heartedly agree with you about the "head ripping off" chant. It is a HUGE embarrassment, or at least it should be. I've never considered myself to be a prude, but there are young kids there that don't need to hear that garbage.

Come on folks, you are educated people - you can come up with something insulting and funny that isn't rude and wrong.

I can't wait to see our new players and my boy Tanner who I went to high school with and watched him play as a tight end.....Rock Chalk!

Speaking of tight ends, I met Charles Brooks in Wal-Mart Wednesday. Guy is pretty big and appears in good shape, so I went up to him and said he looked like he must be on some kind of athletic team - a great little 2 or 3 minute conversation went on from there. Hope he gets some playing time - would love to see him haul in a few passes from Crist.

We can blame the last year's coaches for much of this, but where was the Sr. leadership? We seemed to not have any player leadership. I don't believe Crist is that much better a QB then Webb, but the big x factor with him is leadership.

" I don't believe Crist is that much better a QB then Webb..."

You are joking, right?

What makes you think Crist isn't that much better?

Do you know whats nice? Having a coach that won't pea down his leg when he is faced with a decision in the 4th quarter of a game that his team is miraculously still in.

Charlie Weis won't bat an eyelash to make any decision at anytime during his days here at Kansas. He's been under so much more pressure in other places than he will ever experience here. I'm not sure why, but that makes me feel good about what we can do this year.

Hi Jayhawks, I am an ND fan , but just the fact that Dayne C. is your QB will have me watching and rooting for the Jayhawks. DC is a class kid that took everything that happened at ND without any complaints[[or whining] I think he will have a great year and prove a lot to college football fans. Good luck