Members of the Kansas University women’s golf team wait to tee off during a practice round for the Big 12 Championships on Thursday, April 26, 2012, at Lawrence Country Club.

Weather forecasts call for a chance of thunderstorms today with wind gusts around 20 miles per hour.

“These greens have a lot of slope on them, and if the wind gets blowing, things will get real fun,” Nugent said with a smile. “We’re hoping that it starts howling out of the south.”

The reason for wanting to play in tougher conditions is simple: The Jayhawks have golfed at Lawrence Country Club enough in the last year to know how the course plays in each type of situation.

After sunny, mostly wind-free practice rounds Thursday, other Big 12 schools might be at a disadvantage to see the course at its toughest. 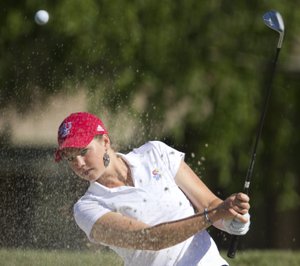 Kansas University golfer Meghan Potee takes a turn from a sand trap during a practice round for the Big 12 Championships on Thursday, April 26, 2012 at Lawrence Country Club.

“I think that’ll be a big advantage, because we’ve played it when it’s so windy,” KU junior Audrey Yowell said. “And it definitely plays different.”

The Jayhawks have been preparing themselves for this weekend for a long time.

Nugent estimates she’s played at LCC around 100 times since the fall season. It’s gotten to the point where she’ll get to a spot on the course and won’t have to measure the distance to the pin; she’s been in that location enough times to know exactly where she is.

Yowell stayed in Lawrence over the summer and was able to play the course “a ton” then.

“When you first come out, (the course) doesn’t look that challenging,” Yowell said. “I think a lot of people will underrate it. The greens can be really tricky, and there’s definitely some shots you can’t miss. You can never miss long — stuff like that.”

KU coach Erin O’Neil said one key to playing at LCC was to stay in the fairways because of the long rough. She also believes her team will know the best places to attack the uneven greens.

“We’re very comfortable with being out here and playing the course,” O’Neil said. “I know we’re excited to show everyone what a great place this is and for the challenge of hosting.”

The three-day Big 12 championship, which is free to the general public, begins today at 8 a.m.

KU will be paired with Missouri and Kansas State today and will tee off at 8:40 a.m.

The tournament consists of three rounds, with one round being played each day. The lowest four individual scores each day count toward the team total, with the lowest three-day team total winning the league championship.

Seven of the 10 programs playing this weekend are ranked among the top 50 in the latest Golfweek/Sagarin ratings. That includes Texas A&M, Oklahoma State and Baylor, who are ranked Nos. 16, 17 and 18, respectively.

The tournament will be missing one top competitor, as Texas junior Madison Pressel — who won last year’s Big 12 championship — will not be playing this weekend because of a right shoulder injury, UT coach Martha Richards confirmed Thursday.

At Old Hawthorne Golf Club in Columbia, Mo., last year, Pressel posted the lowest 54-hole score in the league’s championship history with an 8-under 208.

Here is a look at the five Jayhawks competing:

O’Neil on Boonraksasat: “(Thanuttra) is a very good iron player. She has one of the best mental attitudes of everyone. She’s always positive and keeps fighting back, doesn’t get down on herself and hits the ball a long way. She has good ball-striking.”

O’Neil on Nugent: “Katy is ‘steady Eddie.’ It isn’t always pretty, but she’ll find a way to get that ball in the hole. That I know. She always has her head in a good spot. She also has a very good short game.”

O’Neil on Yowell: “Audrey is very methodical. She has a plan. She works very hard. She probably has one of the best work ethics on the team. She just gets the most out of her game.”

O’Neil on DiMarco: “She’s a freshman. She’s learned a lot. We’ve been working hard on her game this year. Her ball-striking is really good right now. We’ve got her in a new putter, and she’s doing well with that. She’s a thinker, too. She’ll try to plan her way around the golf course. She’s another one that keeps her head in a good spot. She’s always positive and enjoys being out here.”

Here is a look at five strong contenders for the individual title from other Big 12 schools:

Vines ranks 21st nationally in the latest Golfweek individual rankings, which is the highest rating of any Big 12 competitor. The junior’s 72.8 scoring average ranks third among all competitors this weekend.

Dominguez ranks first in the Big 12 with a 72.3 scoring average. She is ranked as the 35th-best golfer nationally by Golfweek.

Kaufman’s 72.6 scoring average is second among this weekend’s competitors, behind only her teammate Dominguez. The junior is ranked 47th nationally by Golfweek.

Davis is one of only four players at this week’s event to have an average score under 73 (72.9 scoring average). She is 49th nationally according to Golfweek’s latest rankings.

Actually, the picture is kind of funny. It looks like our team needs to stay out of the rough.

Also, I like our girl jiggling her bag just as the opponent is in her backswing...NICE!!!

Regarding the headline, I've played the same course for 20 years and I still suck!! The good news I don't lose nearly as many balls...I know where to look for them!!

Jesse, way to take a bullet for journalism integrity!!

It's all Gill's fault, Bill Self can't recruit. It's University of Kansas. Calipari cheats. Get rid of the a] track, b] the obscene chant, c] the Band's black uniforms - take your pick, It's all Lew's fault,

Oak: I thought the rant was funny and I have no corrections to offer.

First off it's not a competitor...its a fellow Jayhawk. Secondly she is not shaking her bag. Looks like she is taking something out of it which doesn't really make much noise. Third, go Potee...representing the great golf we have here in the greater Indianapolis!

I stand corrected and, obviously I cheer for our girls as I would for our guys....Go Ladyhawks!!!

First off, were corrections really needed? Secondly, well I don't actually have a second point. Third, Indianapolis is internationally-known for crappy golf.

Thanks for keeping me informed on women's golf. Michelle Woods is a friend (she's a great kid) and is a freshman on the KU team. It is nice to be able to track her progress. Please, keep it up! Oh, and GO JAYHAWKS!