KU coach Bill Self: Peters 'a potential top-20 player in the country' 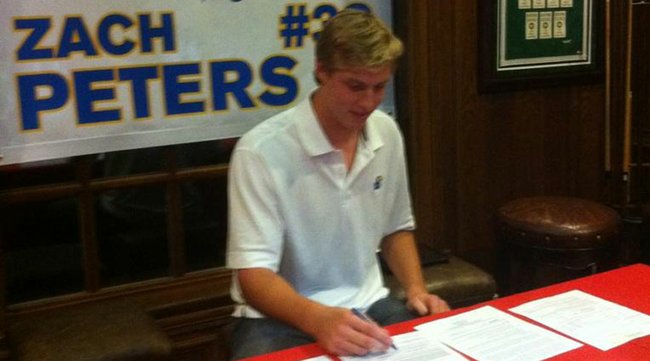 Zach Peters officially signs with KU at his house in Plano, Texas.

Peters signed his papers at a ceremony with family and friends at his home in Plano, Texas on Monday night. The 6-foot-9, 240-pound Peters orally committed to KU in April 2010.

“Zach’s big. He’s a legit 6-9, 240-pound high school senior that can really shoot the basketball,” Self said. “He’s big and rugged. We can play him to where he’s big enough to defend the five (post) or skilled enough to play in at the four (power forward).”

Peters averaged 15.3 points and 9.0 rebounds in 2010-11 in guiding Prestonwood to a state runner-up finish in TAPPS (Texas Association of Private and Parochial Schools).

“Guys that can really shoot are usually great passers. I think he will be that,” Self said of Peters. “He’s going to be a guy that can do a lot of things. We know he’s a big guy that can stretch it but he likes to hit you and certainly contact and physical play will not be an issue with him early in his career.”

Peters was rated the No. 97 player by Rivals.com following his junior season at Prestonwood. He is now ranked 144th by Rivals.com.

“He didn’t play summer basketball the past two years so his stock has fallen from the national rankings,” Self said. “All that did was motivate this kid. Zach is a potential top-20 player in the country. I think he’ll come in and have a great impact right off the bat."

“We’re so excited to get (Peters’ parents) Tim, Christy, Zach and his brothers as part of our KU family,” Self said. “Their entire family has been extremely loyal to us throughout this recruiting process. I can’t wait to have them on board.”

I am so excited about this young man, I think he's going to be something very special. Rock Chalk!!!!!!!

You never really know how a kid will turn out, but I'm betting Self is right about this kid. The rankings don't mean a thing if you don't play summer ball. He is gonna be one tough dude on the court.

legitimately excited about this kid coming to KU.. not only will be a great player on the court, he won't give us any issues off the court.

Bulletin: hihawk is struggling to pass a fur ball.

You are one miserable individual. Quit trying to pass yourself off as a KU fan.

huh?! What are you talking about?

Brady is my guess.

It reminds me of the banned account poster formerly known as jayhawkinnebraska, I believe.

My thoughts exactly, just couldn't think of his name.

Roughly 94.36875% of the responses he gives are "I hate Brady Morningstar" related. I'm sure Oakville is correct.

What's fun is that Brady has absolutely nothing to do with Peters. They play two completely different positions and couldn't be more different.

But, hey, why make any sense when you can bag on an alumni!

Please help me understand why you can't something negative? Obvsiously, some comments are out of bounds, but fans should be able to voice an opinion without the sky falling.

And folks should be able to respond to negative comments without the sky falling.

We've had two to three years of sub-par (for ku) recruiting classes. We're going to have trouble scoring this year.

I think we know who will take over Conner Teahan's crown as Official Jayhawk Ladykiller next year!!

Add an inch and ten pounds to Zach and Perry will never have to worry about banging in the middle again!!

You read my mind. I remember reading about a year ago that Zach said he had to hold back on lifting because he bulked up so quickly. Future solid contributor around the basket. Welcome aboard, Mr. Peters.

Are you going to Maui Classic?

Any word on Andrew White???

I don't mean to sound negative, because I 100% am not. I am very, very excited about this kid coming in. My only concern is that I hope not playing summer ball only affects his rating and not his development. I'm glad he wants to live a well-rounded life and chose to catch the pigskin; I just hope it doesn't put him too far behind what he could be.

Regardless, I could not be more ready to watch this kid bang around in crimson and blue.

I think you need to drop yourself down to 97% not negative.

The earlier report here said Zach spent last summer going to professionals for intensive basketball training. There are a number of those and I am not remembering which ones but I was impressed that he took that route to work with better competition than AAU can supply.

I was not aware of that. That actually is considerably better than AAU (specifically for defense). Thanks for the info.

Zach! We're excited that you are now "Official!" Welcome aboard!

What is your malfunction, you fat barrel of monkey spunk?

Shawshank, I love it!

Welcome to you Zach. As coach says, your family is now in our Jayhawk family. Thanks for the early commit and thanks for being a man of your word.

You will discover that the Jayhawk fans are mostly knowledgeable about the team and always have the highest expectations. With your demonstrated work ethic I believe you will win them over very quickly. We all love hustle and willingness to bang inside and shoot outside.

ALL I can think of is...FIRE GILL!

Love having this kid on board but lets be honest. The only reason why we gave this kid a scholarship is simply to be in the running for one of biggest recruits for next year. Julius Randle. Zach and Julius are on the same high school b-ball team. Julius is a for sure top 5 recruit in the class of 2013. I am sure that Zach will be pimping KU to Julius all year. Do what you can Zach to bring this kid on board.

"The only reason why we gave this kid a scholarship..........". That comment is so far off base that it really doesn't deserve a response, but I feel like digressing. The reason Coach recruited him is because he legitimately wanted him. If, by chance, we get a packaged deal and land both players, great. But Zach is an awesome recruit on his own accord, with or without Julius.

dlshaw is right about Randle, but i dont buy that Zach is some scrub either.

The reality is, this season is going to be a rough one by KU standards. But with these kids coming in and the two who will be elgible next season, suddenly that group of kids starting out for us is loaded.

I think last nights game showed the lack of "bigs" that we have will clearly have an adverse affect on things this season. Not everyone is as talented as UK obviously, but the Wildcats sheer athleticism took us to the woodshed last night.

Adding in these kids next year will certainly improve the situation. Our size issues certainly wont be a problem then.

Prestonwood Baptist Academy is a good school. He will probably join Coach Gill's Bible Study group, good on him. At least he wont be a thug....