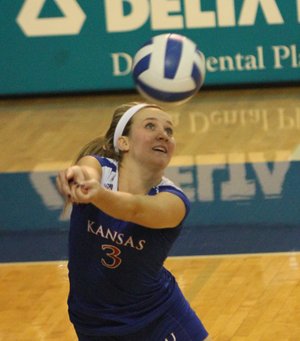 Players and coaches used the word grudgingly Wednesday night, but there isn’t another way to describe the emotions after another close loss.

“It always hurts worse when you’re that close,” junior Tayler Tolefree said. “Where can you find two points in 25 or 26?”

That has become the story of the Jayhawks’ season. When they find themselves in positions to win, an error or a good play by the opposition puts the Jayhawks on the losing end.

Coach Ray Bechard is still searching for the reasons this keeps happening. The team practices hard and goes through all the situations it experiences in games. But the Jayhawks (13-11) have a 1-10 conference record, and Wednesday was a good chance for victory against a Tiger team that is now 5-6 in the conference.

He said that his team should have been amped up for the game because it was Mizzou, because it was November and because the team was trying to stay afloat after a great start to the season.

The first three sets were all decided by two points. After the Jayhawks broke through and won the third set, they should have had the momentum. But the Tigers rallied.

“The momentum only stays if you keep making plays,” Tolefree said.

The Jayhawks didn’t. Mizzou started the set with an 8-2 lead, and every rally by Kansas fell short.

“Every pass they had was perfect,” sophomore Jaime Mathieu said of Mizzou’s fourth-set run.

Statistically, Kansas was evenly matched with Mizzou. But the Jayhawks’ recent woes cannot be evaluated through a stat sheet. In the second set, Mathieu dove into the wall to save the ball from going out, and her teammates kept it alive. What was an inspiring play by the Jayhawks turned into a point by the Tigers.

“It’s tough when you don’t see results,” Bechard said. “And that’s what we’re dealing with.”

It’s hard for Kansas to take away good things from the game even though it looked like one of its best of the season. At this point, Tolefree said, she would rather have a real victory instead of a moral one.

“The NCAA doesn’t necessarily look at moral victories,” she said. “You learn from them, and sometime down the road you can look back and see what the value was.”

There isn’t much the team isn’t doing to prepare, Bechard said. Right now, the challenge is cutting out the errors that go three feet out of bounds or into the net at critical moments.

“We can’t really focus on that now,” Mathieu said of the loss. “We have another game coming up, and you try to forget about this. Next play you try to win.”

There is no money to fire this clown. He has a Perkins signed contract with no out for being fired for losing. He will just continue to draw a check and coach losing teams. It's the KUAD way that Lew Perkins perfected.

Bechard's contract expires on Dec. 31, 2012 so he only has one season left and if Zenger thinks he should be fired after this year he will find the money.

Oh, and were those pictures take with a 8 year old cell phone?

It's all mental with this team, I've watched a couple of matches this year and the problem with this team is all correctable stuff. Serving into the net, bad placement on sets, lack of communication between players are the primary issues. It's not a lack of talent with this team because they did beat the 6th ranked team in the country early in the season, it's a bunch of little things that snowball and usually lead to getting blown out in the end because this team doesn't have the ability to refocus after a mistake. It's up to the coaching staff to get this team to refocus after a small mistake and keep it from snowballing, but Bechard doesn't seem capable of that.